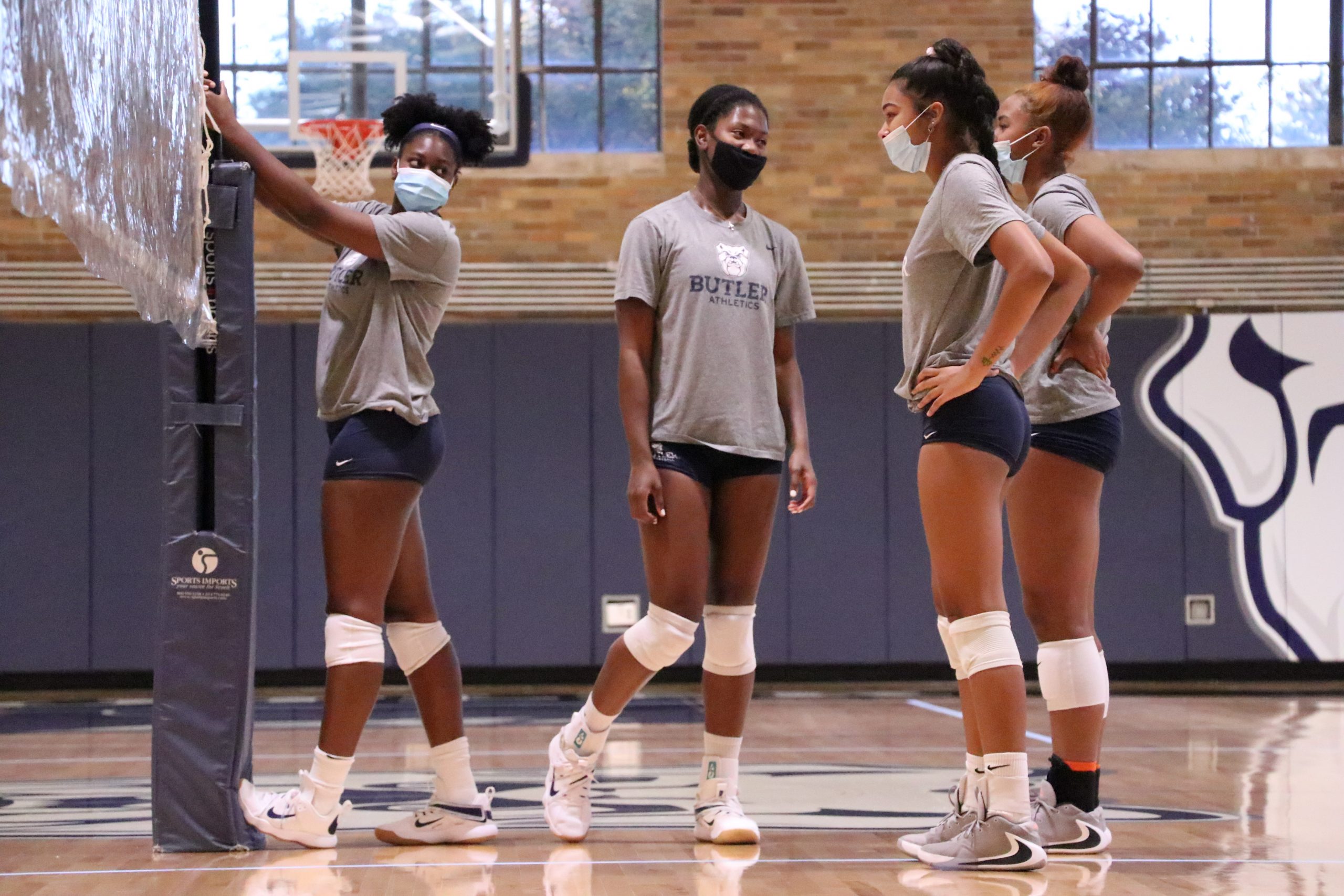 After a long 14 months, Butler volleyball is finally back and ready to compete.

Having their season pushed back from fall 2020 to spring 2021 may not have been ideal, but it is exactly what this team needed. With a total of seven freshmen joining the team, Butler was able to take advantage of the unexpected offseason to get to know one another on and off the court.

At first, redshirt junior Melody Davidson was not excited to have the season in the spring. Many players scheduled lighter class schedules expecting their season to take place in the fall, but now have to shoulder heavier class loads during their season. But as the season approached, they soon realized it was the perfect opportunity to set the season up for success.

“It gave us more time to grow together as a team and have that time off to really get more comfortable on the court,” Davidson said. “It takes time to get used to everyone and be able to work well on the court together.”

Volleyball head coach Sharon Clark started off the season with a heavy emphasis on team chemistry — trying to form essential connections on the court as three fourths of the team are underclassmen. Therefore, the players are still trying to get a good feel for playing together while also still moving around positions, reflected in the team’s 2-3 record to start the season.

“I mean we literally start four freshmen,” Clark said. “Our setter, Maddie Friebel, has gotten thrown right into the fire and that’s a tough position, that’s a quarterback position, and she did a good job this weekend. Amina Shackelford, you know she’s playing like a seasoned veteran and she’s a freshman. She really carried us a lot this weekend and I think people are going to see big things from her. And then Caroline Cleveland and Hannah Kelly were just phenomenal in our back court. Those four freshmen showed us a lot this past weekend, so our future is very bright.”

With about nine underclassmen and three upperclassmen in the rotation on the court, the staff is looking at Davidson to become more of a vocal leader as their most senior and seasoned player.

“I have been learning how to be a better leader as I’m naturally an introverted, quiet person,” Davidson said. “So it’s hard for me to find my place in the leadership role. So that was a big thing I have been growing into this season.”

Davidson was named to the Preseason All-Big East team and earned Big East Defensive Player of the Week after the first week of the season. She said she hopes to bring the younger players along with her in her success in order to be a strong team.

“This team has a kind of drive and like a fight to us where we don’t want to lose games,” Robinson said. “Like losing games isn’t really in our heads at all and so, yeah, I think looking forward, we have nowhere to really go but up.”

This season, the Big East is splitting up conference play into an East and Midwest Division. Butler will play in the Midwest Division along with nationally ranked No. 21 Creighton and No. 25 Marquette, as well as DePaul and Xavier. The Big East Preseason Coaches’ Poll placed Butler to finish last in their division.

Butler’s ultimate goal is to make it to the Big East tournament, but also to prove those preseason rankings wrong. Their other goal is to keep everyone healthy and free from COVID-19 in order to keep playing and continue their season. Clark noted a lot of hard work and sacrifice has been made by these athletes for their season to get cut short.

This season everyone is required to wear their masks so they have been utilizing practices to get used to playing with them on. Davidson said everyone is mostly used to wearing masks now, but they are still looking forward to the day when the masks can come off.

“Playing in masks is not fun,” Davidson said. “It takes a lot of time to get used to it, especially just learning how to breathe and when to take breaks because it does get tiring playing with masks.”

Overall, the team is just looking forward to being back on the court and able to play again and getting to travel on the road together.

The Bulldogs opened up the first week of the season with two wins and three losses. The team fell to Valparaiso and Loyola on Jan. 29 before picking up their first victory in a five-set match with Bellarmine. Butler opened up their home schedule with a win over Indiana State, 3-2.

After their opening weekend, they showed the potential they have as a team. As Robinson said, the team can really only go up from here. While there is still plenty of room for growth, Clark is excited for the future ahead for the Butler program as she believes this is a talented team and group of freshmen that have shown a lot of potential.

“They’ve put in a lot and they will continue to because that is just their DNA,” Clark said.