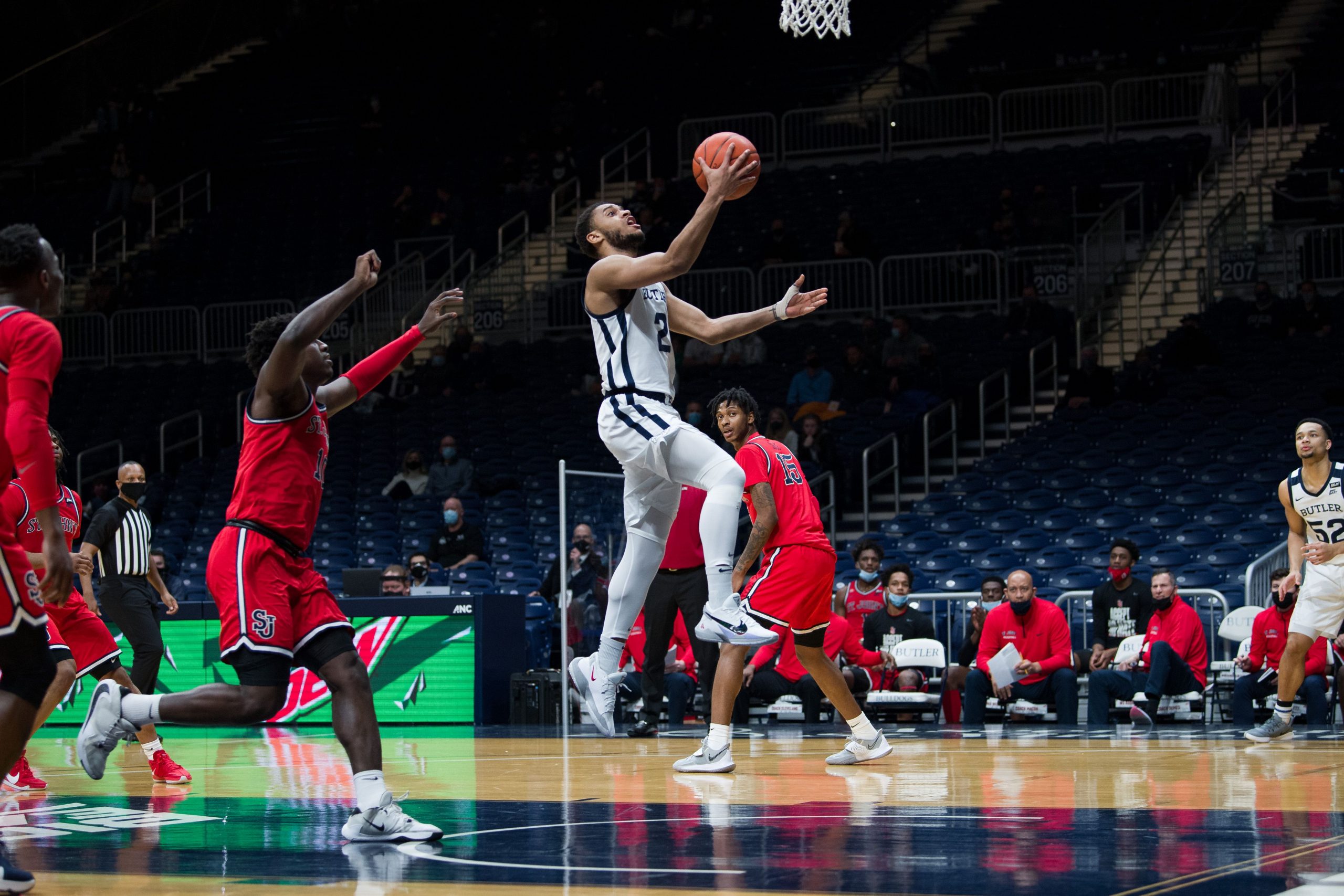 Aaron Thompson attempts a layup in Butler’s win over St. John’s last week. Thompson and the Bulldogs look to avoid falling to tenth in the Big East as they welcome Marquette to Hinkle Fieldhouse today. Photo by Zach Bolinger.

The Butler men’s basketball team will look to bounce back from a disappointing loss at Georgetown as they return to Hinkle Fieldhouse to face Marquette on Feb. 17. While the Bulldogs are ahead of the Golden Eagles by a game in the conference standings, Butler fell to Marquette two weeks ago in Milwaukee, 70-67. Here’s what you need to know heading into a game Butler needs to win to avoid falling to tenth in the Big East.

1. Marquette is one of the coldest teams in the Big East

A month ago, the Golden Eagles were competitive in the Big East at a 4-4 record, right in the mix in a conference that could send four to six teams to the NCAA Tournament. At that point, Marquette boasted wins over No. 4 Wisconsin and at No. 9 Creighton. Since then, the team has been a shell of itself. Their lone win in the last seven games came against the Bulldogs. They almost gave away that game, too, as Butler chipped away at an 18-point deficit with 12 minutes left down to just three by the final possession.

In the last week, Marquette got shellacked by Villanova, 96-64, before losing on their Valentine’s Day date at Seton Hall, 57-51. The Golden Eagles have been unable to find any consistency during this stretch of games. Case in point — freshman stud Dawson Garcia scored a career-high 28 points in the loss at Villanova before logging a scoreless 27 minutes in the Seton Hall game. It would not be fair to say the Golden Eagles have not been competitive in this cold streak, though. Aside from the beating taken at the hands of then-No. 5 Villanova, all of Marquette’s games in the last month have been decided by three possessions or less.

2. Could this be the game Butler gets off to a good start?

As of late, it has been a recurring storyline for the Butler Bulldogs — fall behind by double-digits in the first ten minutes of the game and mount a furious comeback with little time on the clock to try to eke out a win. The comeback never came in their most recent loss at Georgetown, though, as the Hoyas went up by as much as 17 points in the first 15 minutes, never letting Butler get within 13 points the rest of the way. Over 18 games this season, the Bulldogs have trailed by double digits at some point in 15 of them. The early holes leave Butler, a team who is already limited offensively, forced to play a near-perfect game just to be competitive. Sometimes the team goes on a furious run to retake the lead, but oftentimes is met with a loss.

Thankfully for the Bulldogs, the Golden Eagles are not the type of team to spring to a big lead in the first half. Over their six losses since Jan. 17, Marquette has scored 70 points or more in just one game — 73 points to a St. John’s team that loves to push the pace. Over the entirety of league play, Butler is just one of two teams in the Big East that has scored less points per game than the Golden Eagles. The Bulldogs need to play at least even in the first half, but if they don’t, Marquette is a team that can allow a comeback.

On the defensive end, the Golden Eagles have struggled to keep their Big East opponents from catching fire from beyond the 3-point line. Marquette has allowed over 40% shooting from deep in conference games this season, dead last in the 11-team Big East. This past week, Villanova connected on 13 3-pointers, just one less than the Golden Eagles attempted.

This could mean a possible bounce-back game from Butler guards Jair Bolden and Chuck Harris. Against St. John’s and Georgetown last week, the two combined for 4-for-26 from beyond the 3-point lines despite coming in as the Bulldogs’ most proficient shooters on the season. Together, the duo accounts for over half of the team’s attempts from long range, so a return to their efficient shooting percentages will be a welcome sign for head coach LaVall Jordan and the rest of the team. The duo combined for eight 3-pointers made in these two teams’ first meeting.

Marquette also forces the least number of turnovers of anybody in the Big East. A sure-handed Butler squad can dictate tempo, especially since the Golden Eagles rarely apply pressure defensively. Butler commits the second-fewest turnovers of Big East teams in league play. The Bulldogs forced 21 turnovers in these two’s first meeting while coughing it up just nine times. Look for Butler to capitalize on a similar margin tonight.