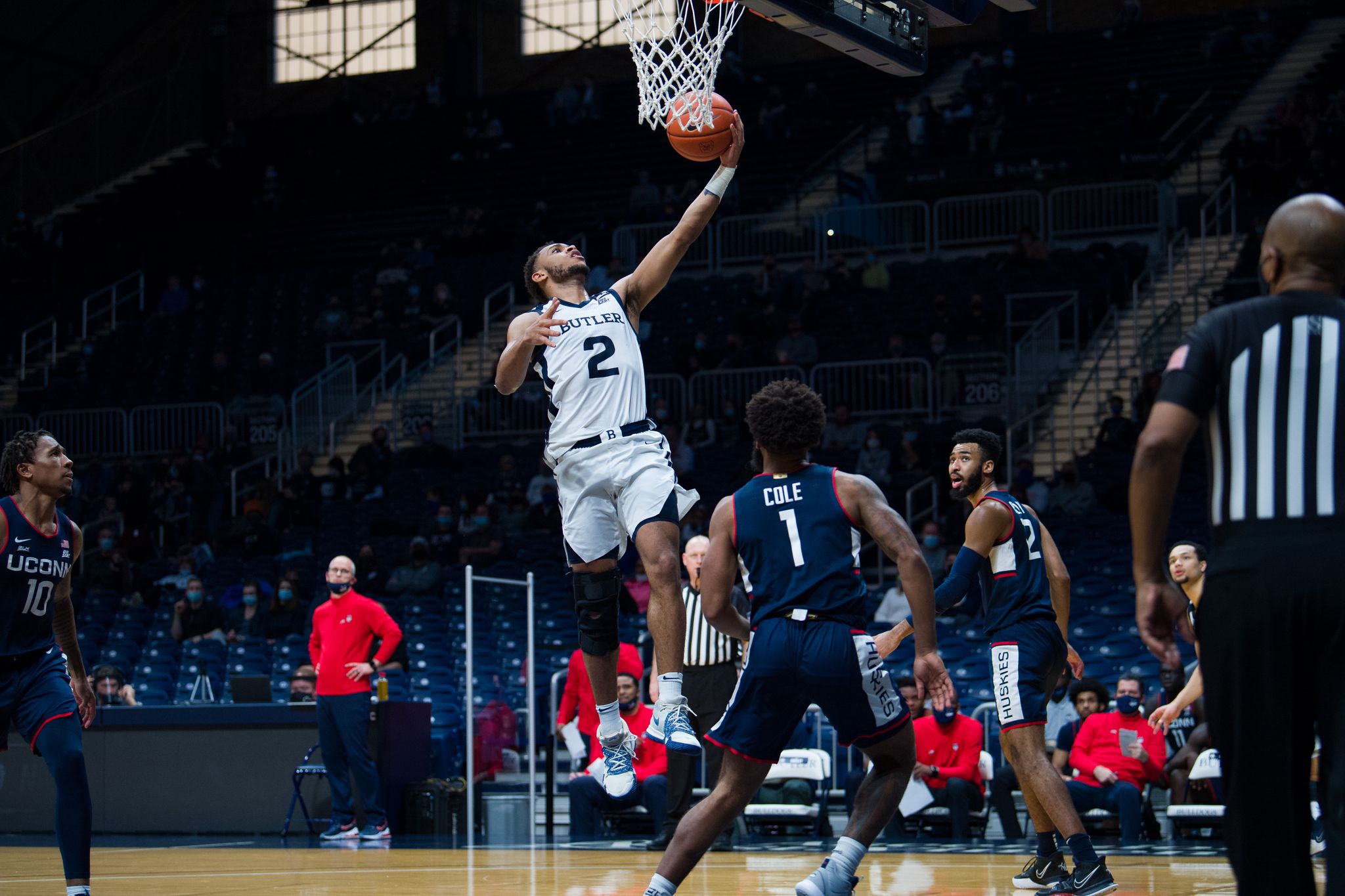 Aaron Thompson drives for a layup in Butler’s loss versus UConn earlier this season. Thompson scored just three points in 26 minutes in their loss to Marquette. Photo by Zach Bolinger.

Butler could not have asked for a better shot in the waning seconds: a wide-open 3-point attempt from Jair Bolden that would have tied the game. Unfortunately, the shot rimmed out and the Butler men’s basketball dropped their third consecutive game, losing to Marquette, 70-67, on Feb. 2 to fall to 4-8 in Big East play and 5-10 overall.

The Bulldogs allowed Marquette to shoot 61% from the field, and it was the Golden Eagles’ leading scorers that did the most damage. DJ Carton and Koby McEwen led the way with 18 points apiece. Marquette scored just five bench points, but scored just enough to give them the win.

For Butler, Bo Hodges nearly recorded a triple-double in his second career game in a Butler uniform with a final stat line of 15 points, 12 rebounds and eight assists. The Bulldogs trailed by as much as 18 points with 12 minutes remaining in the game, but never got closer than the final three-point margin. We go beyond the box score in a game Butler never led, but was inches away from sending to overtime.

1. Bo Hodges is here to stay, and Chuck Harris is the future of this team

Bo Hodges’ performance won’t be remembered for its efficiency, but the senior guard did just about everything else in the loss at Marquette. Hodges nearly recorded a triple-double on a team-high 39 minutes, while only committing one turnover. Despite shooting 5-for-13 from the field, Hodges’ presence in every other aspect of the basketball game could not be ignored. In just his second career game as a Bulldog since being granted eligibility from the NCAA on Jan. 30, Hodges has proven he is no flash in the pan. The former East Tennessee State guard even showcased his 3-point shooting with two against Marquette — Hodges made just 36 triples in his previous three seasons.

On top of the recorded statistics, Hodges has been tasked with performing on both ends of the floor. Hodges took the lion’s share at guarding Xavier’s leading scorer Paul Scruggs on Jan. 30 and did more of the same against Carton. As the losses pile up this season, it’s easy to see Hodges as the centerpiece of a Butler offense next year with further development from the rest of the young roster. For now, though, Hodges continues to impress by what he can do both with and without the basketball. He’ll look to notch his first victory as a Bulldog against DePaul on Feb. 6.

Chuck Harris, meanwhile, stepped up offensively during the late Butler charge. After losing a tooth following a blow from Theon John’s elbow midway through the second half, Harris caught fire from behind the 3-point line. The freshman guard finished the night with a team-high 16 points off 5-of-8 shooting and a team-high four 3-pointers. While Harris has taken on a new role off the bench, he has shown he is the future of this team. Who else gets better after they get a tooth dislodged from their head? If Harris finishes his four years at Butler, he will have plenty more games with this production, likely ending in wins for the Bulldogs.

The Bulldogs came into this game with a league-worst 4.4 steals per game in Big East play. Butler operates at a snail’s pace, so usually turnovers for both teams are relatively low, though not the case against the Golden Eagles. Marquette committed 21 turnovers against the Bulldogs, compared to just nine from Butler.

The imbalance in taking care of the ball turned into a 22-9 Butler advantage in points off turnovers, which is necessary when Marquette shot a blazing 61% from the field throughout the game. Had the Golden Eagles been able to take care of the ball at even their season’s average this year, this game would not have been close.

Bryce Nze led the team with four steals, intercepting passes thrown over the top trying to get to Marquette’s John and Dawson Garcia. Nze has also flashed his ability to take the ball up the floor himself, jump-starting the transition game that has been virtually nonexistent from the Bulldogs’ repertoire this season. If Butler can continue to speed up their opposition, it can take the pressure off of their halfcourt offense to create all of their points. From another perspective, Butler will win nine of ten games in which they force 20 or more turnovers, just not against Marquette.

3. A slow start and missed free throws proved to be the difference

Among the most concerning trends of Butler basketball this season is their tendency to fall behind by double digits. This setback in the beginning of games forces the Bulldogs to play nearly perfectly down the stretch to stage a comeback. Case in point — the Bulldogs fell behind by 20 points in the second half against Xavier, but mounted a furious comeback to get within four points before fading back. Against the Golden Eagles, the Bulldogs fell behind 18 points, but managed to get within a single possession by game’s end.

If Butler can manage to play even to those opponents in the first 25 minutes, they walk away with double-digit wins against quality opponents. Instead, it’s a comeback that falls short.

Another concerning trend — foul-shooting. Coming into the night, Butler ranked 337th out of 357 Division I teams by converting just 61% of their free throw attempts. The Bulldogs’ already poor percentage will actually drop following their 13-of-25 performance at Marquette. In a game that is decided by a single possession, those points at the charity stripe stick out like a sore thumb. Nze made just five of 10 attempts, Hodges made three of six and Aaron Thompson made one of four. Three starters shooting like that from the foul line would not put Butler in a position to win any game in the Big East.

It continues to be encouraging to see Butler fight from behind. The Bulldogs have not given up on a game once this year, and that continues to be a sign to come for this team moving forward. With so many different players stepping up in different moments this season as newcomers, this team should stand to be one of the deepest in the Big East, if not the country, in a couple years’ time.

The Bulldogs return to Hinkle Fieldhouse on Feb. 6 with a winnable game against DePaul, which has one conference win on the season.