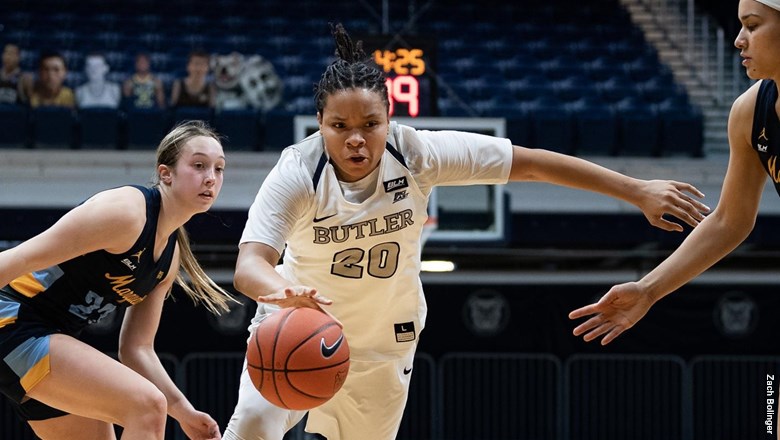 Jaia Alexander makes a move to the basket in Butler’s home loss to Marquette earlier this season. The Bulldogs make the return trip to Milwaukee to face the Golden Eagles on Feb. 10. Photo by Butler Athletics.

The Butler women’s basketball team will go for their second win of the season when they take on Marquette on Wednesday, Feb. 10. The Bulldogs are currently on a five-game losing streak; one of the defeats came at Hinkle Fieldhouse versus Marquette, who dominated the game, winning 95-57. However, Marquette has not been at their best recently either, losing their last two games and squeaking out a narrow victory versus one of the worst teams in the conference.

A big opportunity for the Bulldogs

Anyone who has been following the Butler women’s basketball team knows this has not been the strongest season for the Bulldogs. They have faced COVID-19 and shutdowns, last-minute schedule changes and have been plagued by a lack of practice time. All of this has resulted in a perfect storm for the worst season in head coach Kurt Godlevske’s seven-year career coaching the Bulldogs. However, Godlevske said he is optimistic the team will be able to turn the season around and put themselves in a position to make a run in the Big East Tournament. Right now, Butler sits at the bottom of the conference. However, they are just a game back of Georgetown, two games back of St. John’s — who they play Saturday, Feb. 13 — and three and a half back of Xavier. Xavier has only played five conference games to Butler’s 11, due to long COVID-related shutdowns. The remainder of Xavier’s schedule is brutal, so there is an opportunity for the Bulldogs to move up the standings. Butler also plays Xavier at least once, and if their other game that was cancelled gets rescheduled, it is not out of the question that the Bulldogs could finish ahead of the Musketeers and land near the middle of the pack in the conference if they finish strong. As Butler returns players from injuries and has more opportunities to practice together, this next stretch of games is the best chance so far to salvage the season.

A note on the Golden Eagles

Just as Butler is looking to finish near the middle of the Big East, Marquette has their eyes set on the top. Well, not the top. That spot belongs to the University of Connecticut, currently the No. 2 team in the country, that just defeated No. 1 South Carolina in overtime on an absurd Paige Bueckers shot. But, Marquette has as good of a shot as anyone to finish second in the conference, as they sport the second most wins but have one more loss than both Seton Hall and No. 22 DePaul. Although Marquette has been strong this season, their form has faded slightly as of late. On Feb. 3, they played a close game against 1-9 Georgetown — the only team that Butler has defeated this season — but ended up winning 55-48. They followed that up with a 30-point loss to UConn, which isn’t terrible all things considered. This past Sunday, Feb. 7, they lost yet again, this time a close game to nationally-ranked DePaul. This wrapped up a week-long stretch where Marquette played four games as Butler stayed home to practice and prepare for the  Golden Eagles. It wouldn’t be surprising to see Marquette come out slow in this game following their recent brutal stretch. However, Butler could come out slow because they haven’t played in 10 days. It’s the classic rest versus rust debate, and it will surely play a role in this matchup.

It would be difficult to call this a must-win game for the Bulldogs when they are playing an opponent they should not beat on paper. However, as Marquette comes off of their worst stretch of play this season and Butler is rested and healthy for the first time in a while, this is a golden opportunity for Butler to prove they are not going to roll over. Although there may be more “winnable” games later in the season, the only game that matters for this team is the next one. A win for the Bulldogs would do wonders for the team’s morale and for their place in the standings, and as had been the case all season, if the team can play a full 40-minute game, they can absolutely win.