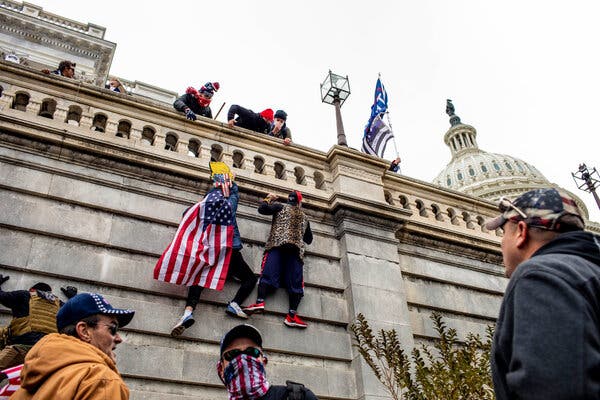 Insurgents climb the walls to the Capitol terrace during an alt-right riot on Jan. 6. Photo courtesy of The New York Times.

After erecting a full-sized gallows in front of the Capitol Reflecting Pool, hundreds of camouflage-bedecked insurrectionists forced their way into the United States Capitol Building on Jan. 6 in an unequivocal act of domestic terrorism. The building was besieged for over five hours by white supremacists acting with the encouragement of President Donald Trump, whose speech at an alt-right rally earlier that day fomented the attack on the nation’s seat of legislative power.

The event was planned on social media platforms frequently used by right-wing organizers, primarily Gab and Parler. Trump superfans championed the planning process, particularly members of the Proud Boys, a far-right fraternal extremist group whose “Stop The Steal” rally was planned to coincide with the Senate’s confirmation of Joe Biden as president-elect. Numerous individuals arrived wearing “MAGA CIVIL WAR: Jan. 6, 2021” sweatshirts that had been pre-printed for the occasion.

Trump, a guest speaker at the rally, encouraged attendees to “walk down to the Capitol” to support the senators fighting his 2020 presidential election loss.

“…We are probably not going to be cheering so much for some of them — because you will never take back our country with weakness,” Trump said.

Breaches to the police line were made in multiple locations; in one, Capitol Police unlatched barricades for the overwhelmingly-white hordes of rioters; in another, the police line was breached after being inundated by the mob. Once through, individuals used segments of fencing to scale the walls and inauguration scaffolding to reach the Capitol’s east terrace. From there, they bolted up the stairs of the eastern entrance and overwhelmed the sparse forces outside the entrance, using flagpoles and other tools to break the shatter-proof glass of the doors and nearby windows for building access.

Many residents and locals were appalled by the unusual lack of security surrounding the Capitol. Elise Offutt, a senior elementary education major and D.C. local, noted that police presence in the city is normally a constant, which made the attack on the Capitol especially troubling.

“To be honest, until this summer I never really realized the extent [of the] power the police really have in D.C.,” Offutt said. “Of course I had seen them around while in the city, but had never seen them show up in such numbers. It was highly shocking that there seemed to be no security or use of force when the Capitol was breached. I mean, I was shocked. I felt like when I went on field trips to the Capitol that there was more security! Something was definitely off.”

The sheer number of intruders forced police to retreat repeatedly as Confederate– and Trump flag-wielding aggressors stormed a succession of secure areas, including Statuary Hall, the offices of Senate and House leadership and both Chambers of Congress. Congresspeople were evacuated after the initial building breach, halting session and forcing aides to scramble for the electoral documents before being whisked to undisclosed safe locations beyond the Capitol.

Clark Boinis, a junior sports media major, was in a nearby suburb of Washington when he learned about the attack. He witnessed a line of armed vehicles — driven by Virginia’s contingent of the National Guard, which Governor Ralph Northam deployed to assist the Capitol Police — make a beeline for the building.

“I was shocked that extremists were able to breach security at the capitol building,” Boinis said. “Being a top-three government building in our country, I’d like to think that it would have adequate security. The breach tells me that the Capitol Police did not have the resources in place to prevent something like this from happening.”

There was one direct casualty as a result of the invasion; 35-year-old insurrectionist Ashli Babitt was shot by Capitol Police while attempting to enter a restricted area, according to D.C. Police Chief Robert Contee. She was hospitalized with a gunshot wound to the chest and died later in the day.

An unknown number of insurgents brought guns — which are illegal to carry openly in the District of Columbia — into the building, five of which were confiscated during initial arrests. Several others were found stashed in the areas surrounding the Capitol after police lines cleared the grounds. At least one terrorist also brought industrial-sized zip ties, which are often used as makeshift handcuffs, into the Chamber of the House.

Live improvised explosive devices were located and subsequently deactivated throughout the course of the day. At least one IED was located on Capitol grounds and one each was uncovered at the headquarters of the Democratic National Convention and the Republican National Convention.

“Obviously it’s super uncomfortable to think that there are people near my home that are putting so many at risk,” Offutt said. “I’m a super big supporter of protesting and have been to my fair share of them in my life — most in D.C.…. But we all know that what happened yesterday was not a protest by any means, and there was inciting and violence in a federal building that turned deadly — it’s just honestly unacceptable.”

Like many large-scale protests, the rally had regional offshoots, a number of which also devolved into intimidation or outright violence. Statehouses in Topeka, Atlanta and Lansing were attacked by local insurrectionists, and major cities from Miami to Seattle experienced waves of alt-right protesters moving synchronously with the protestors in the nation’s capital.

In Indianapolis, Trump supporters staging their own electoral college protest were bolstered by an influx of local Proud Boys, whose chapter showed up in solidarity with their counterparts on Capitol Hill.

The protest remained peaceful, unlike other statehouse riots. According to Indianapolis Star reporter Justin L. Mack, attendees clustered around various phones and tablets to watch the president’s speech in Washington. Like their peers, most were bedecked in Trump swag, waving flags and holding banners reading “Hidin’ from Biden” and “Nice Day For A Revolution.”

Many crowd members were focused on following Trump’s lead moving forward — though several admitted the specifics of that plan are still unclear. Those present were adamant that members of the electoral college had cheated the system or had turned against their president.

Three of Indiana’s nine House representatives were inclined to agree. Reps. Jim Banks, Jackie Walorski and Jim Baird were among the 139 Republican representatives supporting at least one of the objections to Biden’s installment as president-elect; all three voted to oppose both the Arizona and the Pennsylvania electorate results. Rep. Greg Pence also voted to oppose Pennsylvania’s results, but voted in favor of Arizona’s.

Indiana’s senators voted quite differently. Both Sen. Mike Braun and Sen. Todd Young voted to accept the results of the election, though Braun initially had other plans. Braun said his mind changed after the siege on the Capitol.

“When today’s events unfolded, I could not dignify it even with upholding something I objected to,” Braun said. “I’d say that was the reason behind most [of the members of Congress] that ended up changing their minds.”

The impact of the day’s violence extended beyond congressional members. Journalists within the Capitol and around Capitol grounds threw themselves into unexpected upheaval as insurgents forced their way into the building. Like many politicians, their collective reputation has been repeatedly abraded by the president and his supporters, and after four years of vitriolic rhetoric, they are at a dramatically heightened risk in the field.

The day’s unrest brought repeated scenarios of violence against journalists, including several instances of journalists being forcibly separated from their equipment, nooses devised from camera cables and “murder the media” carved into the doors of the Chamber of the House, a sign of how disconnected the media has become from the people.

“Good journalism is absolutely necessary to inform the public about what is happening,” Bridge said. “And for some of these people to feel that level of animosity to the media is, it’s really disappointing, and it is discouraging. And it is also a bit frightening, because the media — journalism, when it is done correctly, is a tremendous force for the public good, and the public good is more than just in political times.”

The racial implications have also proven a hefty weight. For onlookers who participated in the summer’s Black Lives Matter protests, the footage of National Guardsmen helping offenders down the stairs and refraining from macing or shooting at oncomers was a devastating indication of racial privilege and police complicity.

For Black Lives Matter attendees, police courtesy toward violent instigators was a sign of leniency toward white people. Though 326 individuals were arrested during the BLM protests on June 1 alone, just 61 individuals were arrested over the course of Jan. 6, and many of the arrests were for curfew violation, not sedition. Thousands were allowed to leave without interference, which legislators and civilians alike were appalled by.

Sharon Weinburger, Yahoo News’ Washington Bureau Chief, was outraged by the lack of repercussion for attendees who spent the remainder of their evening lounging maskless in the lobbies of the city’s hotels.

“In what other country can you violently storm the Capitol, and then retire for the evening to the Grand Hyatt for a nightcap and a good night’s sleep?” Weinburger tweeted.

Though the immediate supremacist threat has dissipated, questions remain about the state of the government, the plans for Biden’s inauguration and the imminent repercussions for hundreds of insurrectionists still at large. For many onlookers, the most pressing issue is the government’s response to the instigators.

In the current, precarious moment, there is a finite space for leniency, and according to historian Patrick Wyman, it cannot be extended to perpetrators of violence against the state.

“I can’t stress this enough: from the top down, if the people responsible for today’s events face no consequences for what they’ve done, the next time will be much worse,” Wyman tweeted. “If a political line is crossed, either enforce its existence or accept that the line no longer exists.”