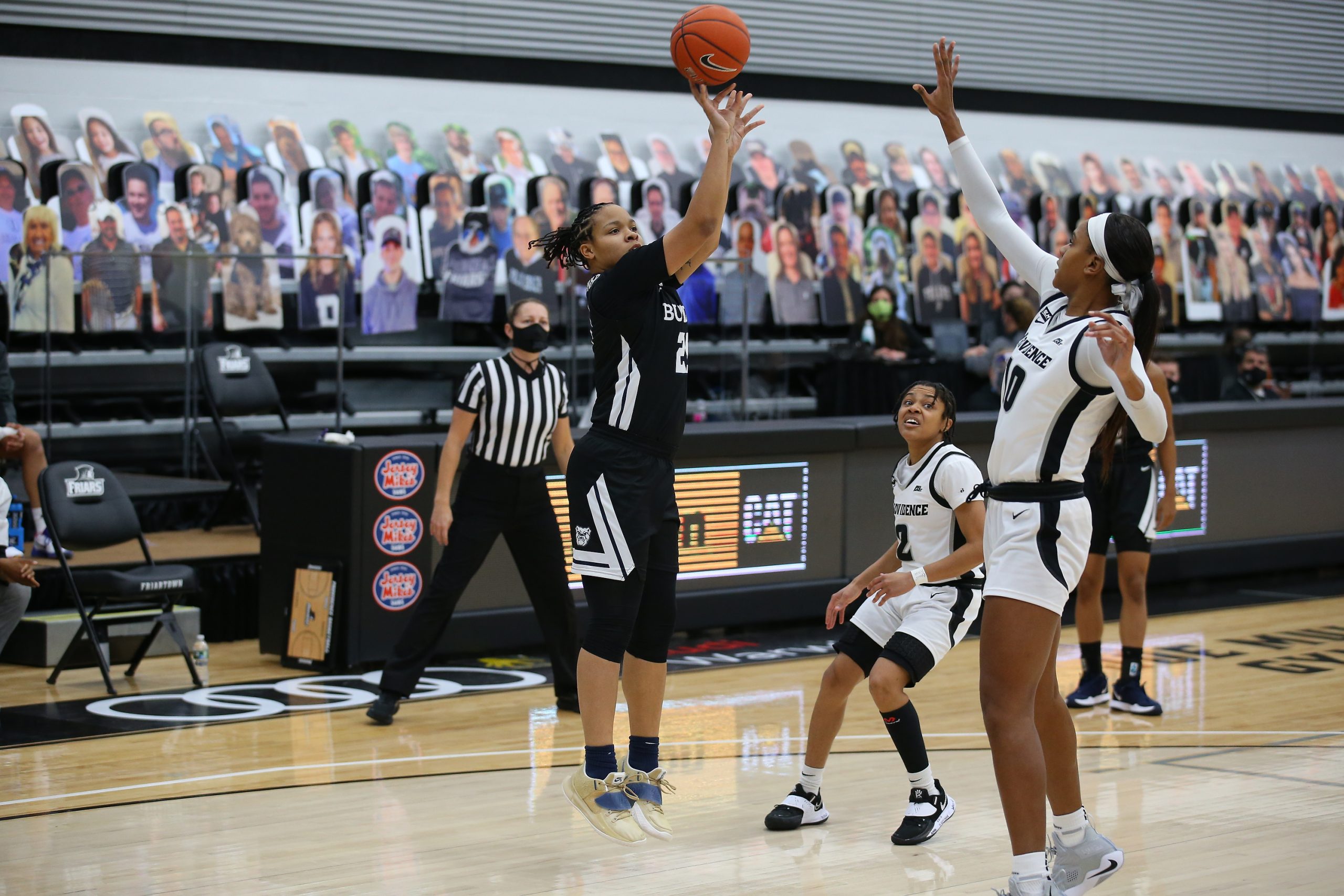 Jaia Alexander fires a shot in their loss at Providence last week. Alexander tied a team-high seven rebounds in their loss to Seton Hall, 79-64, at Hinkle Fieldhouse on Jan. 11. Photo by Christian Bates.

The Butler women’s basketball team lost in their first game at Hinkle Fieldhouse in over a month, falling to Seton Hall, 79-64. Senior guard Genesis Parker led the Bulldogs with 17 points, and Butler’s leading scorer on the season, Okako Adika, added 12 points and seven boards. The Bulldogs fall to 0-7 on the season.

This was the third-straight game with the same starting lineup for the Bulldogs, with Parker and Adika opening the game, as well as guards Micah Sheetz, Jaia Alexander and Upe Atosu.

The Bulldogs started the scoring off early, as Sheetz found an open Adika under the basket for two. Seton Hall answered right back with a layup, but Parker hit a scoop layup on the other end to give Butler the early lead. On the Pirates next possession, Atosu grabbed a loose ball at half court and took it all the way for a layup of her own. Following a few missed shots from both teams, Seton Hall’s Andra Espinoza-Hunter hit back-to-back threes, with Parker hitting a layup in between the two long balls.

With the game tied at eight, Adika hit a 3-pointer to take back the lead, which is no surprise given that she’s shooting an impressive 42 percent from deep this season. Seton Hall responded with a bucket on the next possession, and then Espinoza-Hunter hit her third 3-pointer in the span of two minutes to give the Pirates a 13-11 lead. Parker snatched the lead back with a three of her own, splashing her shot in from the top of the key and continuing her hot run since she has returned to the lineup.

Seton Hall’s speedy guard Lauren Park-Lane and Bulldog forward Ellen Ross traded buckets on the next two possessions with about three minutes to play in the first, but both teams went on a bit of a cold streak for the rest of the quarter. The Pirates hit a pair of free throws, and Sheetz hit one of her two shots from the line to tie the game up at 17 apiece after one quarter of play. Park-Lane and Espinoza-Hunter scored 15 of the Pirates 17 points, and Parker led the Bulldogs with seven.

Atosu made a nice defensive play to open up the second, jumping in front of a Pirate pass and taking it down to the other end of the floor before getting sent to the line where she hit both of her free throws. Following a Seton Hall basket, lengthy freshman forward Nyamer Diew grabbed an offensive board, spun around her defender and hit a layup to give the Bulldogs the lead, 21-20. After trading turnovers, the Bulldogs left Espinoza-Hunter wide open at the top of the key, and she rattled in her fourth 3-pointer of the game. The Bulldogs made up for it on the next possession, as Alexander grabbed an impressive offensive rebound, threw a cross-court bounce pass to a cutting Parker, who made an athletic layup while falling to the ground.

Butler went on a cold streak over the next three minutes, and the Pirates took advantage going on a 9-0 scoring run and taking a 10-point lead with four minutes to play in the first half. Junior guard Annilia Dawn ended the Bulldogs’ scoring drought by taking a defensive rebound all the way down the court and hitting a layup and drawing the foul in the process. The Pirates answered with a 3-pointer, and after Genesis Parker hit an off-balance shot in traffic, Espinoza-Hunter hit her fifth three in the first half to extend the Pirate lead to 11. Adika made a second chance layup, and after a Seton Hall layup, Alexander hit a jumper off the dribble to cut the lead to nine. Another second-chance layup for Okako Adika with 15 seconds left nullified a pair of Seton Hall free throws and gave the Pirates a 43-34 lead at halftime.

The difference in the first half came down to 3-point shooting, as Seton Hall hit their shots— 8-of-19 from deep—and the Bulldogs were cold, shooting just 2-of-13 from beyond the arc. Part of this dichotomy was due to defense, as a lot of Butler’s 3-point shots were well-contested, and Seton Hall found themselves open on quite a few of their long balls.

After Seton Hall opened up the scoring on a Park-Lane layup, Parker responded with a floater over her, drawing the foul, and converting the three-point play at the line. The Pirates followed that up with an and-one of their own to extend their lead to 48-37. A few possessions later, Sheetz hit a short jumper over two Pirates to spark a scoring run for the Bulldogs. Adika did her best James Harden impression, hitting an impressive step-back three and cutting the lead to six. Park-Lane hit a nice floater on the other end, but Ross got the points back with a smooth mid-range jumper.

Over the next couple minutes, the Bulldogs got cold and went on a fouling streak, leading to a 10-0 Seton Hall run, seven of the points coming from the free throw line. This extended the Pirates lead to 16, their largest of the game. Parker gave the Bulldogs a bit of light with her second three of the game, but Espinoza-Hunter came right back with her sixth 3-pointer of the contest. Park-Lane hit back-to-back shots in the final minute, and Jasmine Smith hit a jumper at the buzzer to give the Pirates a 69-47 advantage heading into the final frame. Seton Hall finished the quarter on a 19-3 run — they shut down the Butler offense and continued their hot streak both at the free throw line and beyond the arc.

Seton Hall continued to dominate to start off the fourth, shutting out the Bulldogs for the first four minutes and scoring seven points of their own, capped off by Espinoza-Hunter’s seventh 3-pointer of the game. Atosu ended the scoring drought for Butler with a free throw, and then found an open Diew in the corner, who hit her fifth 3-pointer of the season. Sheetz found herself open in the corner a couple possessions later and hit a three of her own. On their next possession, freshman center Rosemarie Dumont grabbed an offensive board and put it back up for two to get herself on the scoresheet. This capped off a nice 9-0 run for the Bulldogs, who were playing mostly players off the bench during this stretch.

Following a bucket and a free throw from Seton Hall’s Mya Jackson, Diew hit her second 3-pointer of the game. Atosu hit a layup with about two minutes left, and after both teams went scoreless for most of the rest of the game, Diew hit her third three of the game on her third attempt on Butler’s final possession. These three long balls from Diew brought her 3-point percentage up to 54 percent on the season on 13 attempts. Despite the relatively small sample size, she has proven to be a very good shooter from deep, and she may be a weapon that head coach Kurt Godlevske will want to come back to as the season progresses.

As has been the case for most of the season, the Bulldogs looked as good if not better than their opponent for most of the game. However, they were yet again plagued by long stretches where they couldn’t get anything going offensively and let up big scoring runs that took them out of the game. This team has shown that they are capable of winning games against Big East opponents, but they need to play consistently for 40 minutes to do so.

The Bulldogs next game is Wednesday, Jan. 13 at home versus Georgetown at 6 p.m., a rematch of the New Year’s Eve clash where the Bulldogs had only seven available players. Butler will also have another shot at Seton Hall on Sunday, Jan. 17 in New Jersey.