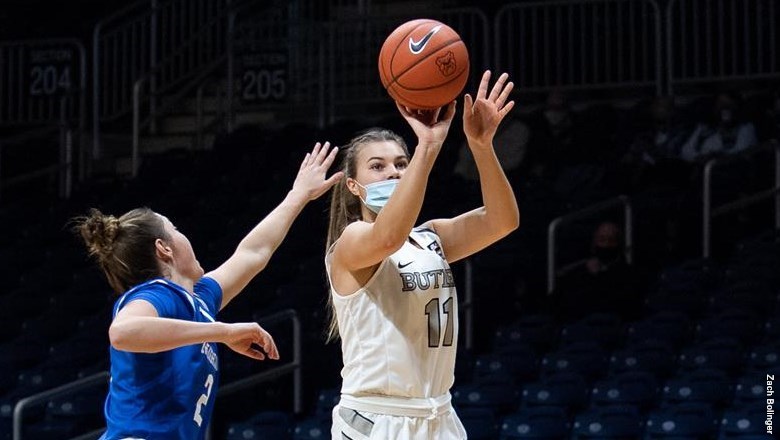 Redshirt Tenley Dowell fires a 3-pointer in a game earlier this season. The Bulldogs returned from a 22-day pause due to COVID-19 on Dec. 31, falling to Georgetown, 56-45.

In the final game of the toughest and weirdest year for college basketball in recent memory, the Butler women’s basketball team dropped their fourth game in a row, falling to Georgetown 56-45. Junior forward Okako Adika led the Bulldogs with 11 points and seven rebounds and redshirt freshman guard Tenley Dowell had nine points, shooting 3-5 from behind the arc. Georgetown junior forward Jillian Archer notched her first career double-double, with 10 points and 11 rebounds and added two blocks in the Hoyas’ home opener.

Both teams came into this game without a win, and this was only Georgetown’s second game of the season. This was Butler’s first game in 22 days after the team had to pause team activities in accordance with COVID-19 protocols on Dec. 10. The Bulldogs were without a few key players and only had seven players available for their first Big East road game of the season.

After falling down 6-3 halfway through the first quarter, the Bulldogs shut out the Hoyas for over five minutes of play. In that same period of play, Butler got hot from behind the arc, sparking a 13-0 run, their best run of play so far this season. Junior forward Ellen Ross ended the first quarter with a short jumper with less than a second left to give the Bulldogs a 20-11 lead.

After Adika opened up the scoring in the second quarter with a layup, the Hoyas ripped off a 7-0 run capped off by a Kelsey Ransom three to cut the Butler lead to four. Senior guard Upe Atosu answered right back with a three of her own, and stole the ball from Archer on their next possession and scored on the fast break on the other end to grow the Bulldog lead to nine. Georgetown fought right back with an 8-0 run to cut the Bulldog lead to a point. The two teams traded threes at the end of the half, with Butler holding a 35-31 lead going into the break.

This was by far Butler’s best performance in the first half all season. The Bulldogs had struggled out of the gates in all three games to start the season. They were outscored by a total of 144-69 in the first half of those games, so a halftime lead was a welcome sign for the team. Another positive sign was all seven active Bulldogs hit a 3-pointer in the first half, with the team shooting an impressive 7-14 from deep. This is a massive improvement from their first three games, where they shot 27.4 percent from three as a team.

The third quarter started scoreless for the first two minutes before Adika opened up the scoring with a layup to extend the Bulldog lead to six. Butler failed to score the rest of the quarter thanks to Georgetown’s stout defense that forced six Butler turnovers including two shot clock violations. The Hoyas hit two threes in their 12-0 run to end the third quarter, and took a 43-37 lead heading into the final period.

Adika opened up the scoring early in the fourth to cut the lead to four, but the Bulldogs wouldn’t score for the next eight minutes as Georgetown went on another 12-0 run. Dowell hit back-to-back threes in the final minute and a half to cut into the Hoya lead, but it was too late for the Bulldogs.

It was clear that fatigue was a major problem for Butler in the second half, as the players were visibly tired and weren’t playing with the same intensity as they did in the first half. This makes sense given their thinned out bench and lack of practice and time to get into game shape. The poor second half performance and the loss are important and should not be completely overlooked, but the Bulldogs played their best basketball of the season in the first half, which is a success given the tough circumstances through which the team is playing. Once the Bulldogs have some of their missing players return and are able to get more practices and games under their belt, Butler fans may see more of what they did in the first half of this game, and see the Bulldogs get in the win column.

Butler’s first game of the new year is Jan. 7 versus No. 18 DePaul at 2 p.m. at Hinkle Fieldhouse.