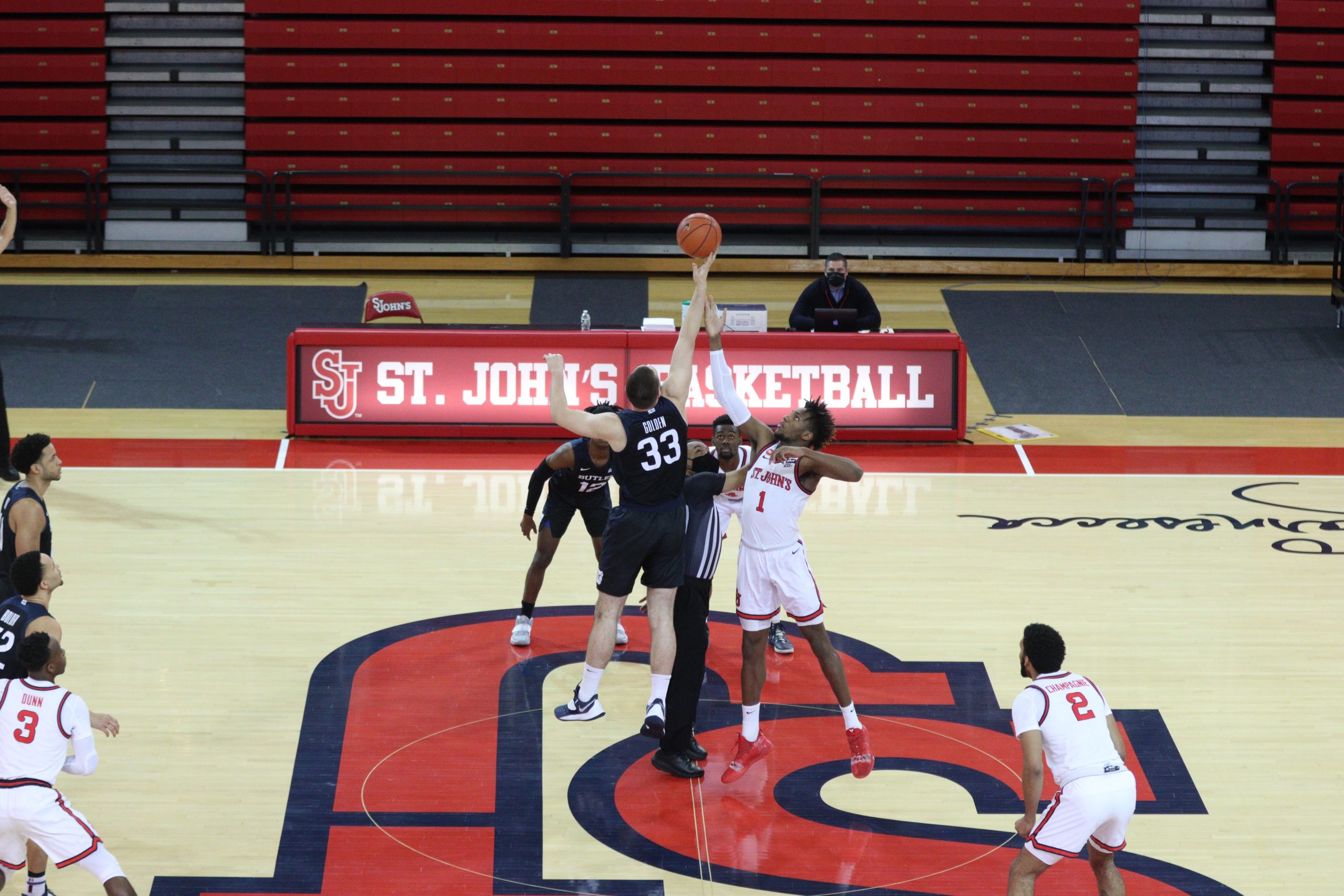 Bryce Golden wins the tip in Butler’s loss at St. John’s last week. The Bulldogs return to Hinkle Fieldhouse on Jan. 16 to face No. 8 Creighton. Photo by Xan Korman.

After falling at St. John’s on the road to drop their seventh game of the season, the Butler men’s basketball team returns to Hinkle Fieldhouse for a date with No. 8 Creighton on Saturday afternoon. Here’s what you need to know as the Bulldogs take on the Bluejays.

1. Creighton is one of the premier teams in the country this season

The Bluejays rank among the nation’s best teams, regardless of the metric or expert polled. Creighton finds itself at sixth in this week’s Coaches; Poll, eighth in this week’s AP poll and tenth in Ken Pomeroy’s ratings. Despite claiming just one victory over a top-25 opponent this season, the Bluejays fell by a single opponent at Kansas and are boasting a six-game winning streak against Big East opponents, the longest of any team so far this season.

Creighton’s offensive attack features a starting five in which every player averages double digits on the season. Marcus Zegarowski, the Big East Preseason Player of the Year, is enjoying yet another stellar season, averaging 14.1 points, 4.8 assists and 4.2 rebounds per game this season while shooting over 40 percent from 3-point range. Zegarowski is not Greg McDermott’s highest scorer this season, though, as redshirt senior guard Denzel Mahoney is averaging 14.7 points per game after his season-high 24 points in the Bluejays’ most recent game against St. John’s.

2. The Bulldogs have their work cut out for them on the defensive end

As has been the case since Doug McDermott donned a Creighton uniform, the Bluejays’ offense has been their calling card this season. The eighth-ranked team in the country top the conference in field goals made, field goal percentage, efficiency from inside and outside the arc. Creighton has utilized their 10.8 3-pointers made per game, good for top-10 in the country this season, to an impressive 83.3 points per game.

For a Butler team that ranks in the bottom 40 in the country in 3-point defensive efficiency, Creighton will prove to be the Bulldogs’ most difficult challenge in that aspect. In the Bulldogs’ two games this season against currently-ranked Big East games — Villanova and UConn — Butler allowed the opponent to connect on 10 3-point field goals. If Butler allows Creighton to get hot from deep, the result could look a lot like the Bluejays’ 81-59 rout of Butler last season.

3. Bryce Golden and Bryce Nze will be the key to a Butler upset

To pair with their top-10 offense in terms of efficiency, Creighton has also boasted a top-40 defense via KenPom this season. The Bluejays have held their opponent to under 70 points on average this season while forcing opponents to under 40 percent shooting from the field through 12 games. Among the strong points in the Creighton defense is their two-point defense; the Bluejays have held their conference opponents to a league-best 44 percent from inside the arc this season.

On the Butler side, Bryce Golden and Bryce Nze are beginning to come around. Although the two are each converting less than half of their two-point attempts, both are elevating their play as the season continues. In order to slow down the Bluejay high-paced offensive attack, look for the Bulldogs to play through their bigs. A performance like Nze’s 18-point performance against UConn would go a long way towards Butler knocking off their first ranked opponent since defeating Villanova at Hinkle Fieldhouse last February.