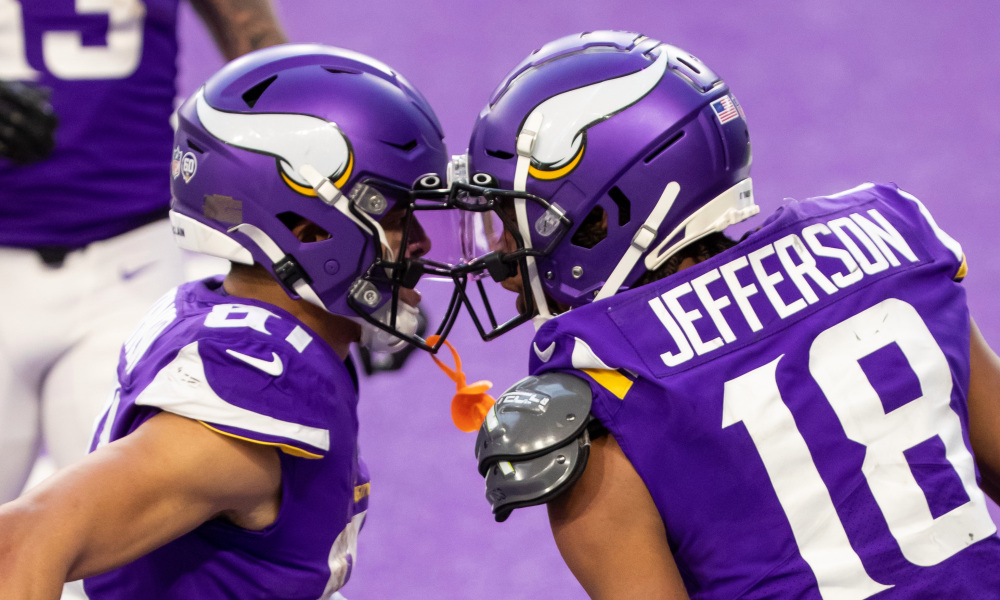 Justin Jefferson celebrates after scoring a touchdown in last week’s game against the Panthers. Jefferson faces a juicy fantasy matchup against a porous Jaguars defense in Week 13. Photo by USA Today.

The fantasy playoffs are only one week away, bye weeks are back for the final time this season and there is more Tuesday night football meaning this week is going to be another interesting one. After last week’s mess on Wednesday night’s football game between the Steelers and Ravens, the rest of the NFL teams are looking to make their final playoff pushes or last-minute tanking to get Trevor Lawrence.

Similar to NFL teams, fantasy managers need to make their last minute decisions before getting ready for the most important part of their seasons in the fantasy football playoffs. Desperate times call for desperate measures, so here are the key players to start and sit for Week 13 of the NFL season.

Taysom Hill, New Orleans Saints. The human swiss army knife is starting at quarterback for the Saints. That is the most 2020 statement a NFL fan could say this year as before the year, no one thought he would work out as the starting quarterback. Well, reality is kicking in as Drew Brees’ replacement has not lost a game since becoming the starter in Week 11. Now, Hill will look to continue his streak against a Falcons team he already beat two weeks ago. While he still has not thrown a passing touchdown as the quarterback, Hill’s rushing ability makes him a sleeper start against a Falcons defense that gave up three rushing touchdowns in their last meeting.

Ben Roethlisberger, Pittsburgh Steelers. The Steelers are STILL undefeated. While they have not lost a game yet this season, their schedule has been very nice to them. Going up against teams like a practice squad Ravens team last week, the Bengals twice and even the entire NFC East, the Steelers have had it easy. However, this week, Big Ben and the Steelers will be put to the test against a Washington team that ranks second in least passing yards allowed per game only behind the Steelers defense. He has struggled against stronger defenses this year, and this week does not change anything. Big Ben has played well enough to lead the Steelers to an undefeated record, but this game is looking like it could be a trap game for the Steelers.

Austin Ekeler, Los Angeles Chargers. Guess who’s back, back again, Ekeler’s back! After missing the last seven games with a major hamstring injury, Ekeler looked very strong in his return against the Bills. He ran for 44 yards on 14 carries, but more importantly, he caught 11 passes for 85 yards. The PPR running back god is back and is ready to tear opposing fantasy teams to shreds. This week, the Chargers are up against a Patriots defense that gave up 138 rushing yards and two touchdowns to the opposing running back. Since Ekeler is back, he needs to be in every starting fantasy lineup available until proven otherwise.

Wayne Gallman, New York Giants. A bit of a sleeper waiver wire pick up for many fantasy owners who do their research, Gallman has sneaking under the radar. When Saquan Barkley went down in Week 2 of the season, the Giants struggled to find a consistent replacement for him. They tried Devonta Freeman and Dion Lewis, but after weeks of them failing to get any sort of run game going, they decided to give Gallman a shot. He did not disappoint as Gallman has scored a rushing touchdown as well as 50 total yards in every game since Week 7. While his success has been great to see, it is expected to take a drop this week against a Seahawks defense that ranks third in least rushing yards allowed per game in the league. Even though Gallman has seen plenty of recent upside, his production could see a dip against the Seahawks that can shut down opposing teams rushing offenses.

Justin Jefferson, Minnesota Vikings. With every week going by, Jefferson has continued to add to his resume for why he should be a sleeper rookie of the year nominee. Since being thrown into the Vikings offense in Week 1, Jefferson has been a major surprise as he has filled the gap that Stefon Diggs left behind when he left for Buffalo. In the last three weeks, Jefferson has caught three or more passes for 70 yards or more. This week the Vikings will be up against a Jaguars defense that has given up the 4th most receiving yards per game in the league. With Adam Thilein still battling COVID-19, Jefferson’s role in the passing game is only going to get better and better especially against a weak Jaguars defense.

Tee Higgins, Cincinnati Bengals. Moving onto another stellar rookie wide receiver in Higgins. Compared to Jefferson, Higgins has lost all of his potential once fellow rookie Joe Burrow went down with a torn ACL. With Brandon Allen now at quarterback, the Bengals have struggled to move the ball like in his last game, Allen only throwing for 136 yards. Now, the Bengals will be up against a Dolphins defense that has given up the second fewest points in the league. As long as Allen continues to throw the ball for the Bengals, Higgins will have a tough time putting up the same numbers as he did when Burrow was quarterback.

Darren Waller, Las Vegas Raiders. Talk about an embarrassment. The Raiders went from looking like a legit contender for a wild card to being questioned if they will even make the playoffs after losing to the 4-7 Falcons, 43-6. The Raiders offense turned the ball over five times meaning Waller never had the chance to be on the field for long. While the Raiders may continue to play inconsistent, they are going to be up against a consistent defense, but not in a good way in the Jets. The laughing stock of the NFL, which ranks third in most receiving yards given up per game, still hasn’t won a game yet and doesn’t look like they will anytime soon. Make sure to put Waller in the starting lineups as he will likely get back on track against the garbage Jets defense.

Noah Fant, Denver Broncos. The Broncos can only go up from here compared to last week’s disaster. When their entire quarterback roster decided to be near each other without wearing a mask, all of them tested positive for COVID-19. Instead of forfeiting, the Broncos chose to start practice squad wide receiver Kendall Hinton at quarterback. He was able to complete one pass to, guess who, Fant the entire game. Now that last week is done and forgotten about, the Broncos will have their quarterbacks return against the Chiefs who have given up the fifth least points in the league. At this point, the entire Broncos roster is a catastrophe, so no one is worth being starting in any position.

Aldrick Rosas, Jacksonville Jaguars. A Jaguars player in a start em? Well surprisingly the Jaguars have been able to keep games closer than people expect in the more recent weeks. Last week, the Jaguars almost pulled it off against a Browns team that is likely to make the playoffs this year. In that game, Rosas was able to hit two field goals, including one from beyond 50 yards, as well as two extra points. This week, the Jaguars will be up against a Vikings defense that has given up the sixth most points in the league. Rosas is a great waiver wire pickup for fantasy managers looking for a replacement for their kicker position.

Zane Gonzalez, Arizona Cardinals. Gonzalez is not very well-loved at the moment by the Cardinals. Gonzalez has struggled in recent weeks with his biggest mistake coming in last week’s game against the Patriots when he missed a 42-yard field goal to put the Cardinals up in the last few minutes. This miss would end to be costly as the Cardinals would go on to lose by three points. Now, the Cardinals will be up against a Rams defense that has given up the fourth least points per game in the league. Gonzalez has not looked good as of late, so fantasy managers should beware of starting him in the next coming weeks.

Kansas City Chiefs Defense. The mighty Chiefs have looked downright unstoppable. Their offense has been a major part of it, but their defense does not get enough credit. Their defense has given up the fifth least points in the league as well as the third-best turnover ratio in the league. This week, the Chiefs will be up against the Broncos offense that is in complete disarray. The Broncos offense ranks the sixth-least in passing yards per game, so the Chiefs should have an easy time holding the Broncos to less than 20 points this week.

Cleveland Browns Defense. The Browns are 8-3. Yes, that record is not fake. While their wins have never been pretty, the Browns might actually make the playoffs for the first time since 2002  if the Browns continue their success. This week, they will be put to the test against King Derrick Henry and the Titans offense that just scored 45 points a strong Colts defensive front. If Henry could do that to the Colts, then one can only imagine what will happen when he meets the Browns’ defense. The Browns defense has looked a little more steady in recent weeks, although this matchup against King Henry is enough for any fantasy manager with a brain to remove them from the starting lineup.