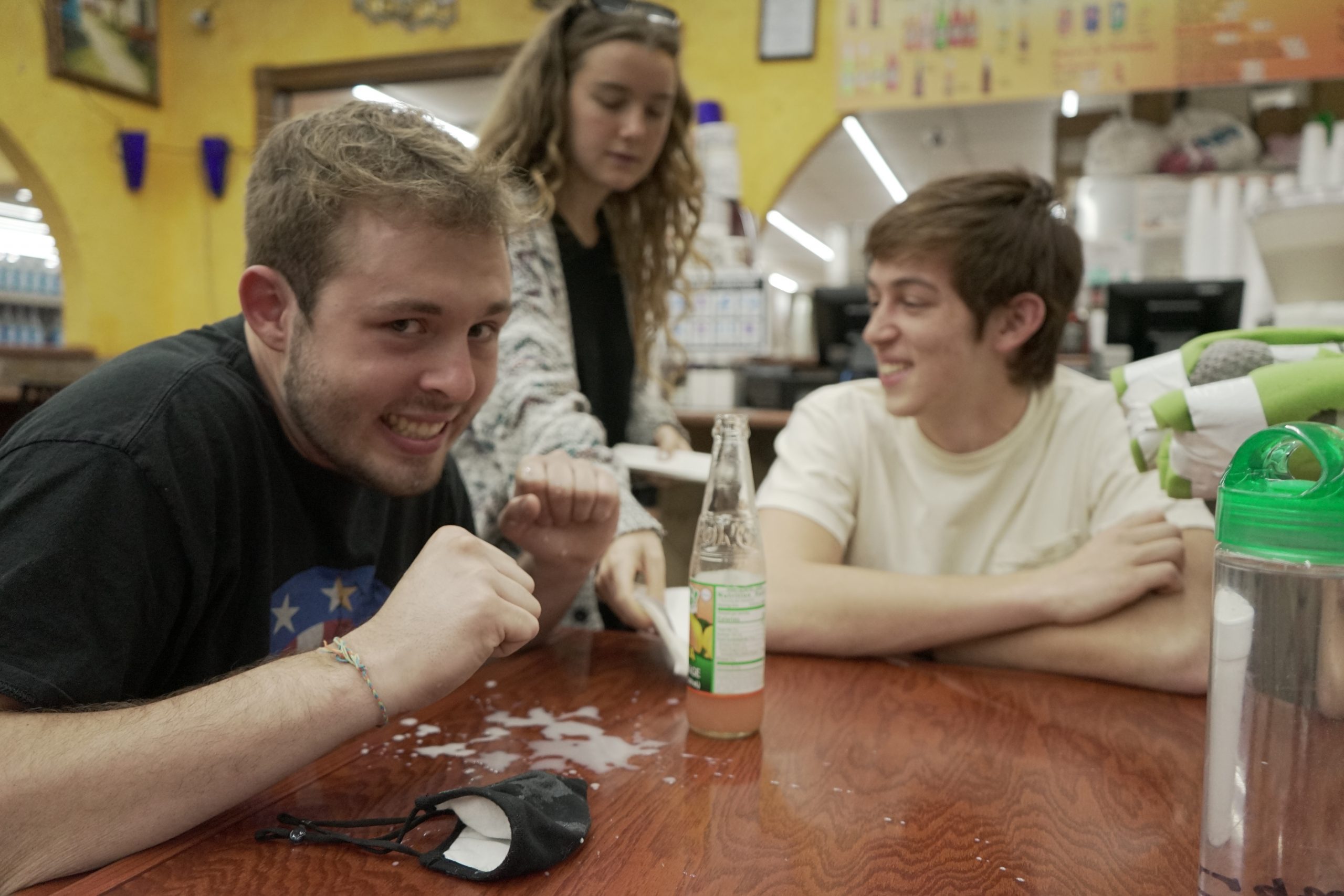 Whether you like it or not, Christmas season is already upon us. In typical fashion, Target has set out its display of fake firs and evergreens with blatant disregard for Thanksgiving. Not sure what to get that special someone this holiday season? Well, you can’t shop on an empty stomach. Get ready to kill two birds with one stone: La Carnicería Guanajuato II is the perfect site for both a casual dinner and unique gift searching.

Be sure not to miss the only turn into the restaurant, which appears to be half a mile too early; otherwise, you’ll end up in a hot tub resale market, which in hindsight would’ve made for a great eating environment. With its arches, pillars and warm colors, the building’s typical Latin American architecture is complemented by neon lettering, which points out only a fraction of the goods inside: Restaurant, Fruits, Grocery, Meats, Vegetables.

Management must’ve noticed when our group walked through the sliding doors in front, because “Despacito” came on over the speaker system to make us feel welcome. Junior vegetarian major Francie Wilson took her first steps into the Swiss Army knife of restaurants and announced, “I’m experiencing sensory overload.”

The restaurant is situated in the southwest corner of the space, past the dish soap aisle and the Jarritos. If you find yourself staring down a cart full of carnitas and chicharrones, you’ve gone too far. The layout is simple: two cash registers, about five tables and many large signs with pictures of the food. Before ordering, you might want to brush up on your Spanish numbers, because no matter how confused you might look, the workers will read your arbitrary number to you in Spanish, and it won’t appear anywhere on your receipt.

This time around, both Connor and I went for the pastor burrito, with marinated pork and everything on it, and again, Francie chose not to eat anything on the menu. Instead, she salivated over the thought of chicharrones, which are also meat — just pre-packaged. If I were a betting man, I would guess she caves in before year’s end.

All food is presented in a paper boat, with the kind of hospitality you’d expect from a lunch lady two weeks from retirement. Johnny Ferris, a sophomore lover of Dominican beverages and staunch monolinguist, found himself in a staring match with one of the three employees over the number 26.

Cambria Khayat, a junior and over-involved student, ordered two steak tacos. When her number was called and she cast her gaze upon the amount of meat inside her corn tortilla, she went on an unprompted rant about everything that was wrong with Condado and Broad Ripple as a whole. Cambria, with her worldly experience, obviously values the authenticity that comes with eating in a grocery store.

As she searched for salsa to accompany her tacos, the only condiment in sight was ketchup and mustard in bright bottles. Upon further investigation, Cambria realized that it was actually salsa contained in the red and yellow bottles, because of course it was.

Our editors want us to actually review the food this time. The horchata, which Connor “waterfalled” as a COVID-19 precaution, was milky and spilled over his chest. He reported that it tasted better after soaking into a graphic tee for a couple seconds. The burritos were meaty and overpowered by an obscene amount of refried beans. The orange juice was warm and pulpy. The torta was bready. The tacos were good, I guess. The star of the show was the guava-based soda titled “Boing Guayaba.” Overall: sh*t slapped. Or for some of our more sensitive readers, the food was yummy.

But you don’t go to Carnicaría Guanajuato II for the food, and we don’t write about it either. The real experience, as demonstrated by Ferris’ $34 basket of groceries, lies in the aisles outside of the restaurant.

In our post-burrito shopping spree, Connor and I realized that the child obesity epidemic in America could be solved by the simple replacement of Oreos with Mexican store-bought cookies, because they’re disgusting. Other notable purchases include a bottle of 99¢ buffalo hot sauce — which, after polling our friends, apparently looks like it’s worth $15; Jose Cuervo chocolates, which could land you with a DUI charge; and color-changing takis, which Francie apparently thinks is less morally heinous than cooked meat.

As the gang left the market/restaurant/deli/bakery/liquor store, 6’4” junior Butler women’s basketball prospect Madeline Zatezalo — also a recent Carniceria Guanajuato II attendee — went on a rant about how culturally aware we are for trying all of these lesser-known restaurants. Leave the liberal buzzwords at home, Madeline, we just like cheap food.

Piling into Zatezalo’s Kia Sorento, we bid Carniceria Guanajuato II farewell as we opened up a package of cookies for sampling, leaving us spitting rejected fragments of crusty bread all over I-465 as we drove back to the Butler bubble, a week of unseasoned chicken and undercooked potatoes ahead of us.