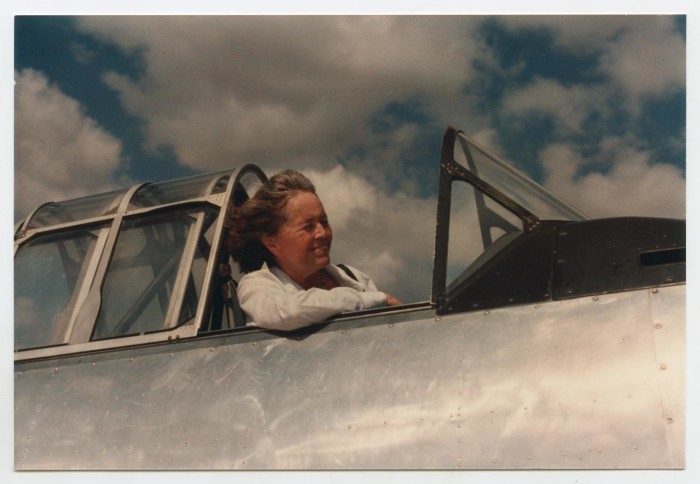 On Dec. 27, 1938 President Franklin D. Roosevelt announced the initiation of a nationwide Civilian Pilot Training Program, or CPTP, aimed at training thousands of college students to fly. By building a strong civilian pilot base, the CPTP was a key program to building the national defense system leading into World War II.

Madge Minton was one of these trainees.

Minton was one of the first four women to graduate from the Advanced Civilian Pilot Training Program, a feat she accomplished while completing her undergraduate degree at Butler University in 1940. Three years later, she joined an elite group known as the Women’s Airforce Service Pilots, or WASPs. With this group, Minton transported hundreds of planes so that her male counterparts could fly them into battle during WWII.

After the disbandment of the WASPs in 1944, Minton fought for veteran status for all members of the group, eventually gaining this in 1977. Minton later passed on Nov. 7, 2004 at the age of 84.

Reagan Markland, a sophomore business and entrepreneurship and innovations major, said she found Minton’s legacy to be inspiring.

Markland said that despite Minton’s trailblazing, the world of aviation is still heavily dominated by men. Amanda Voit, a senior political science and history double major — as well as trained pilot — agrees that the field does not reflect gender equality.

“One of the first things somebody told me when I was looking into becoming a pilot is it’s kind of a man’s world — aviation,” Voit said. “I think it’s less than 10% female for the military or just for airlines. I honestly didn’t think [being a pilot] was even a job possibility for myself. It’s not something I saw as accessible. My mom was a flight attendant, so I just expected that’s where your options ended if you wanted to be in aviation if you’re a female.”

According to statistics, women constitute only 6.48% of Federal Aviation Administration-certified pilots. Voit said that, despite the lack of representation of females in aviation, she believes it important to recognize and celebrate gender and racial minorities within both aviation and the military.

Like Minton, there are several other unique Hoosier veterans from minority groups within the military. The Indiana State Museum works to curate several artifacts that help tell the stories of  individuals whose voices have gone unheard in the past at their Veterans Day exhibit and tour.

Marcy Dodson, adult engagement and program manager at the Indiana State Museum in Indianapolis, said that the Veterans Day exhibit and tour is geared towards telling the stories of those who are not traditionally heard on Veterans day.

“One of the things with this series, we want to really highlight these stories that may not be a Netflix special, it’s something we might not see or be able to easily find in our daily lives,” Dodson said. “So recognizing their stories like, in the Civil War, we have the 28th Black Regiment, and they were the first black men who were able to enlist for service in Indiana. We have an exhibit panel display and some artifacts that are on display there that talk about these three brothers and their connection to Indiana.”

The tour focuses on stories and artifacts from Indiana throughout the Civil War and both World Wars, and it will be offered Nov. 11-13 at select times. Tickets can be reserved on the Indiana State Museum website, giving students the opportunity to learn more about Minton and other influential veterans in honor of Veterans day on Nov. 11, 2020.