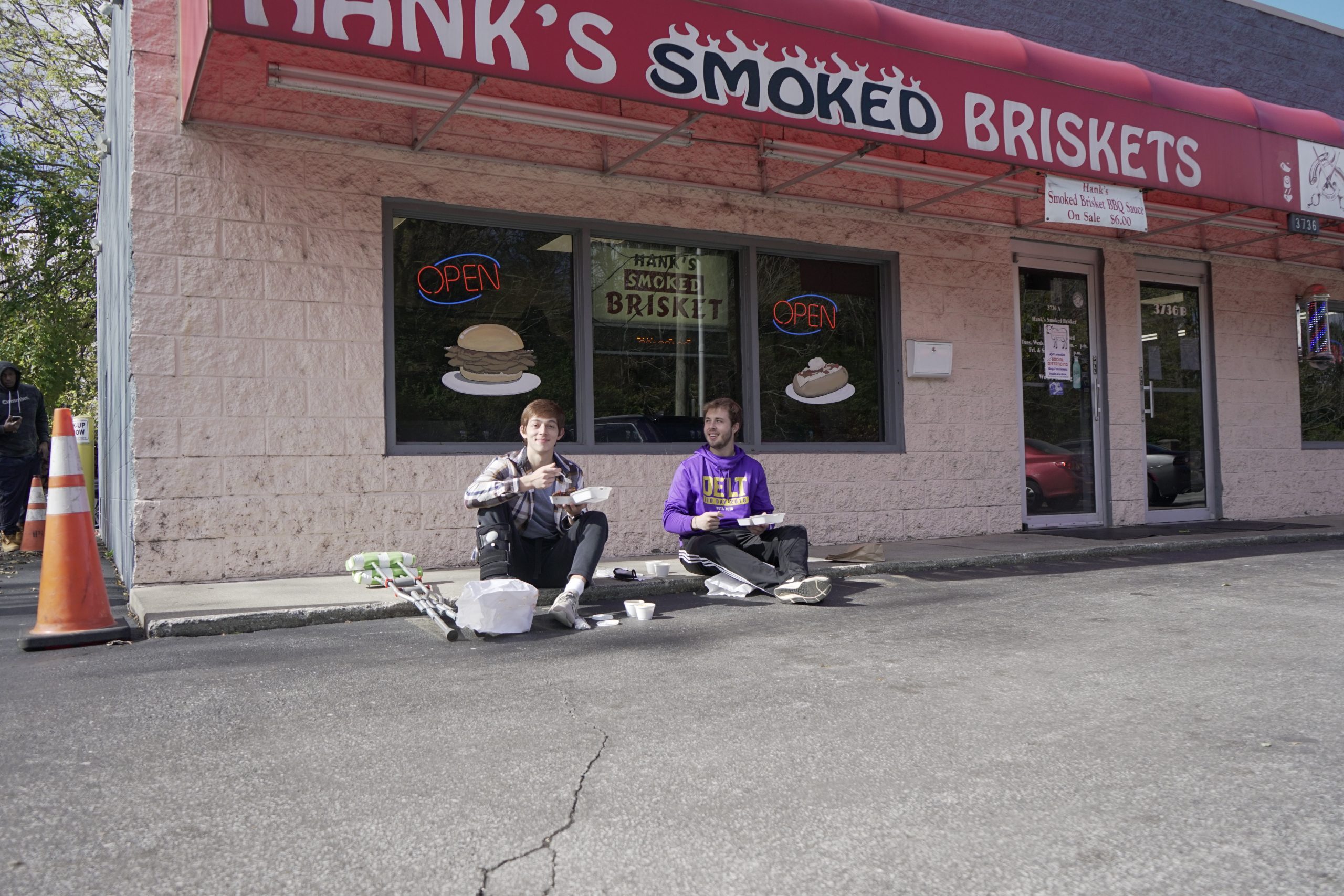 “I’m just saying, there’s no way this is going to be as good as Kansas City barbecue,” Butler Collegian photographer and biased vegetarian Francie Wilson said as we approached the door.

First impressions are important, but not to Hank’s Smoked Brisket, apparently. The first thing a barbecue-seeker encounters on their trip to Hank’s is a parking lot so small that it could fit in the trunk of a sedan. Upon exiting the car, one will likely hear an assortment of ‘90s rap music blasting out of every car in the parking lot.

We eagerly approached the door, but were turned away by a sign stating that only three people are allowed in the lobby at a time due to COVID-19. This led to our trio of misfits sitting on the curb, tempted by the aroma of smoked meats — even Francie.

After 15 agonizing minutes of waiting, we were allowed to enter Hank’s barbecue lair. We’re going to shoot you straight: this place looked like a dentist’s office. The brown monochrome interior and lack of seating suggests that Hank does not have a passion for interior design.

Entering through the double doors, a few things caught our eye. On the left, a singular row of bus station seats offered patrons a semi-comfortable place to wait for their meats — about the same as for a Greyhound. On the right, a collection of newspaper articles and awards filled the wall. One of these articles boasts that “Kansas City has nothing on Hank’s barbecue.” At this moment, Francie, a Kansas native, realized that she had met her match. Similar to Dorothy, Francie was not in Kansas anymore.

Other awards shared similar sentiments. One article claimed that Hank is “an institution in barbecue,” while another called Hank’s Smoked Brisket “the barbecue Mecca of the Midwest.” The pilgrimage to this holy ground is paved in smoked meats, and Butler students will surely be making their yearly, if not weekly, quest after reading this shining review.

One man stood behind a glass window, awaiting our order. To the surprise of absolutely nobody, this man is Hank. He greeted us with a smile and asked us if this was our first time; it was. Upon hearing this, Hank rushed to the back and started slicing meat straight from the slab. He walked back to the front, opened the window, and presented three cuts of brisket and corned beef. After finishing our samples, Emory asked Hank for a recommendation. Hank chuckled, “I can’t answer that for you,” with the confident tone of a man that knows his menu has no weaknesses.

Because Hank didn’t recommend anything specific, we decided to freestyle and order a brisket dinner, a rib tip dinner and a slice of pecan pie for Francie. Following a 10-minute wait in the bus station chairs, Hank called my name and we approached the window. As we grabbed our grub and began our walk to the curb, Hank left us with one final piece of advice.

“Stay in school,” he said with wisdom resembling Morgan Freeman’s in “The Shawshank Redemption.” With all plans of dropping out suddenly gone, we re-established our spots on the curb.

Opening the plain, brown paper bags, we note that the presentation at Hank’s is simple: all of the food is served in styrofoam containers. The bag is heavy and generally damp with sauce, both good qualities in a barbecue joint. As we opened the rib tip dinner, it became abundantly clear that there was no shortage of meat at Hank’s disposal. Step aside Arby’s, Hank has the meats.

The rib tips are smothered in barbecue sauce and clearly smoked over the finest mesquite wood in Indianapolis. The brisket dinner came on a bun, much to my surprise. I removed the bun, as I was not there for bread, and began to devour the brisket with my fingers. Brisket is done right at Hank’s; it melts in your mouth, perfectly combining with the savory barbecue sauce.

With the meat finished, the pecan pie is the only item left, and luckily Francie was willing to set aside her “woke” vegetarian ideals and share. After only one bite, I can say with authority that this pie is better than anything anyone’s grandmother has ever created. If Mister Rogers had a favorite food, this would be it. We brought a small portion of this pie back to our house, and had Dean Starrs, sophomore and notorious pie-doubter, take a bite. Immediately following this lone bite, Dean reclined in his chair, closed his eyes, and said, “This feels like Christmas morning in my mouth.”

After eating Hank’s, cancel your plans for the rest of the day. If you have experienced this barbecue haven correctly, any sort of physical movement will be a challenge for several hours. Despite this, a trip to Hank’s is all worth it for barbecue fans. As the age old saying goes, come for the meat, stay for the curbside camaraderie.