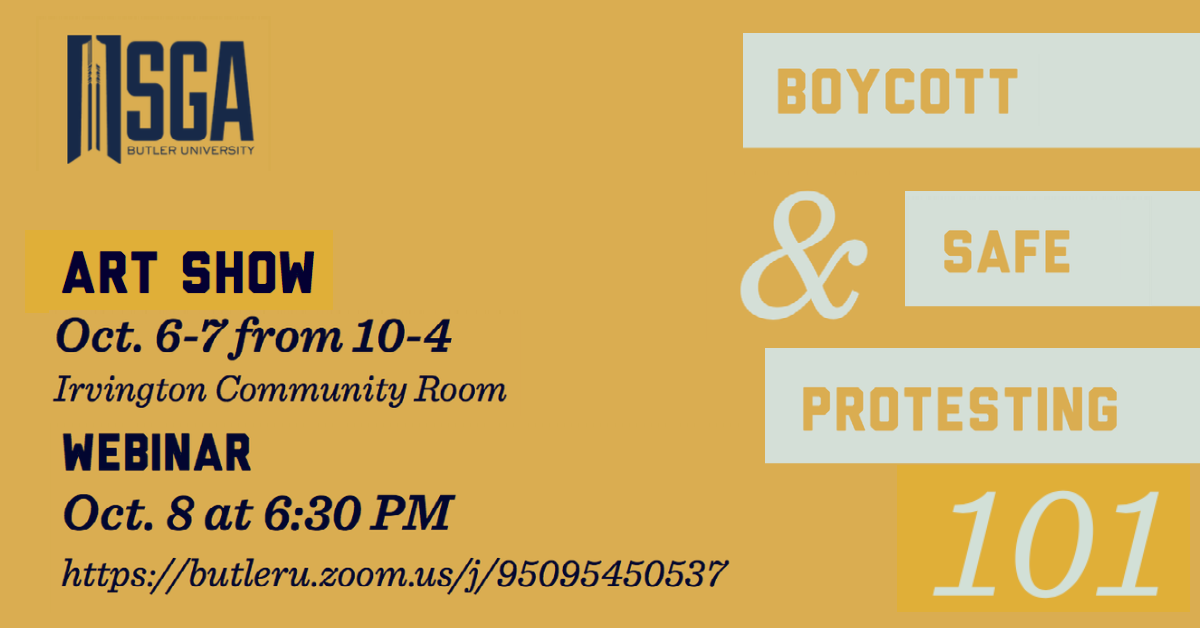 On Oct. 8, Butler University’s Student Government Association hosted an event entitled Boycott and Safe Protesting 101. It aimed to educate students about their right to protest and how to safely do so during a pandemic.

The event received backlash both before and after as it was co-hosted by Students for Justice in Palestine. SJP believes in protesting Palestinian oppression under the Israeli government by boycotting, divestment and sanctions, or BDS. Much of the backlash was due to this particular method of protest, which some commenters believe to be anti-Semitic.

SGA released a statement further explaining the event and letting student groups know they can also partner with SGA for events to let their voices be heard. SGA explained the event featured two different elements: one was a webinar and the other was an exhibit on protesting. This exhibition featured 60 items of artwork, including one piece on the Palestinian call for BDS against the Israeli govenment. SGA also said they stand against anti-Semitism in the statement.

The event featured two speakers. Ashley Toruno was the first speaker, and she represented the American Civil Liberties Union of Indiana. Toruno discussed the power of protesting.

The second speaker, Dalit Baum, is the director of economic activism at the American Friends Service Committee, a Quaker organization that promotes lasting peace and justice. The organization names justice in Palestine and Israel as one of its key issues, and has worked with both groups to “realize a just and lasting peace.” She discussed boycotts and economic activism, and she briefly discussed the BDS movement. She said that BDS and other boycotts against the occupation of Palesitian land are not anti-Semitic.

SGA also said in their statement that they are committed to diversity, equity and inclusion.

“Our goal as a Student Government Association is to foster an open dialogue regarding contemporary social issues,” the statement said. “We want to facilitate opportunities for students to access information on diversity, equity and inclusion topics.”

As a Jewish student, Aaron Bradin, a senior health sciences major, said he was bothered by SGA’s statement.

“It is a slap in the face to say, ‘this is what we stand for,’ but like you’re the student government, like you’re supposed to represent the student population,” Bradin said. “This isn’t a representation at all.”

Layla Barham, a senior political science, peace and conflict studies and international studies triple major and communications director for SJP, said the exhibit and webinar were meant to be two separate events. However, since SGA was also planning a similar event, the two groups decided to combine their efforts.

Barham said the goal of the event was to help students understand their rights when protesting and to teach them alternative ways to protest during the pandemic, such as economic activism. One movement that practices economic protesting is BDS. According to their website, BDS is a movement that uses boycott, divestment and sanctions to end international support for the oppression of Palestinans in Israel.

“The value of an event like this is to help us understand the context for past and on-going boycott movements and to understand what non-violent tools are available to people who are fighting for freedom and justice,” Barham said. “It was disappointing to see how little the critics know about the BDS movement and their willingness to misrepresent the goals of the movement as a way to defame its supporters.”

Barham said the BDS movement seeks to put pressure on Israel to follow international law and to ensure that the rights of Palestinians are not infringed. She also said that SJP condemns hate and discrimination in any form.

Attention was originally called to this issue by Eric Metheny, a conservative social commentator and podcaster, on Twitter. Metheny’s sentiments were quickly echoed by Ryan Fournier, the founder and co-chairman of Students for Trump, on Twitter. The event flyer and a piece of artwork from the event were also featured on the Instagram page BDS Report, which voiced its disagreement with the SGA event.

Brooke Beloso, associate professor of gender, women and sexuality studies and the faculty advisor of SJP, said she was concerned about the posts that have been created in response to the event.

“I was deeply concerned to see the right-wing white man who founded Students for Trump and has used his social platform to mock LGBTQ+ people and encourage such xenophobic campaigns as ‘Build the Wall’ tweet incendiary lies about Butler SJP to his one million followers,” Beloso said. “This places the lives and well-being of our students in jeopardy.”

Beloso also said she wants to make it clear that SJP does not stand for anti-Semitism, but rather, the group finds issue with the Israeli settlers who occupy the West Bank and Gaza Strip.

“This is a nonsensical notion,” Beloso said in response to allegations that the event was anti-Semitic. “Somehow, we are all mostly capable of differentiating between a nation-state and a religion in every other circumstance.”

Although initial event promotions included the Black Student Union, Bust the B.U.B.B.L.E. and Black Lives Matter Indy, no representatives from these organizations spoke.

Maddie Pines, a sophomore elementary education major, said she saw SGA’s post on Instagram, and reached out to them to learn more about the event. Pines said it was explained to her as an event explaining how to protest safely in light of COVID-19. However, when she attended the event, Pines did not find this to be the case.

“So I thought that this was going to be about our current political atmosphere in the United States,” Pines said. “When I went, I was bewildered and quite frankly, horrified that our SGA was co-hosting an event that was not the main purpose of it. I really found that the main purpose was more about targeting Israel and [promoting] the BDS movement.”

Pines also said she felt that SGA should not have been involved with an event that did not accurately represent the voices of all students on campus.

“I think SGA needs to be careful and held to a higher standard about the events that they take part in,” Pines said. “Because once they start taking political stances, they marginalize and delegitimize students whose opinions do not coincide with theirs and it makes students feel unsafe and unheard and unrepresented by the Student Government.”

This is not the first time issues have occurred between the Jewish community and SJP. In February, Butler University Hillel sponsored an event where the national outreach director for A Wider Bridge spoke. Butler Alliance and SJP both spoke out against this event and described it as “pinkwashing.”

Bradin said moving forward he would like to see SGA apologize for the way they handled the situation.

“I’d like change,” Bradin said. “I’d like an apology maybe, that would go a long way, especially with the Jewish population on campus, [and] in general more awareness to other groups on campus besides one.”

Barham said she would like to see SJP and the Jewish community on Butler’s campus work together in the future.

“This is not a religious struggle,” Barham said. “Palestinians and Jews alike know the impact of white supremacy. In order to build a better world, our communities must fight hand in hand against white supremacy, racism and all forms of injustice.”