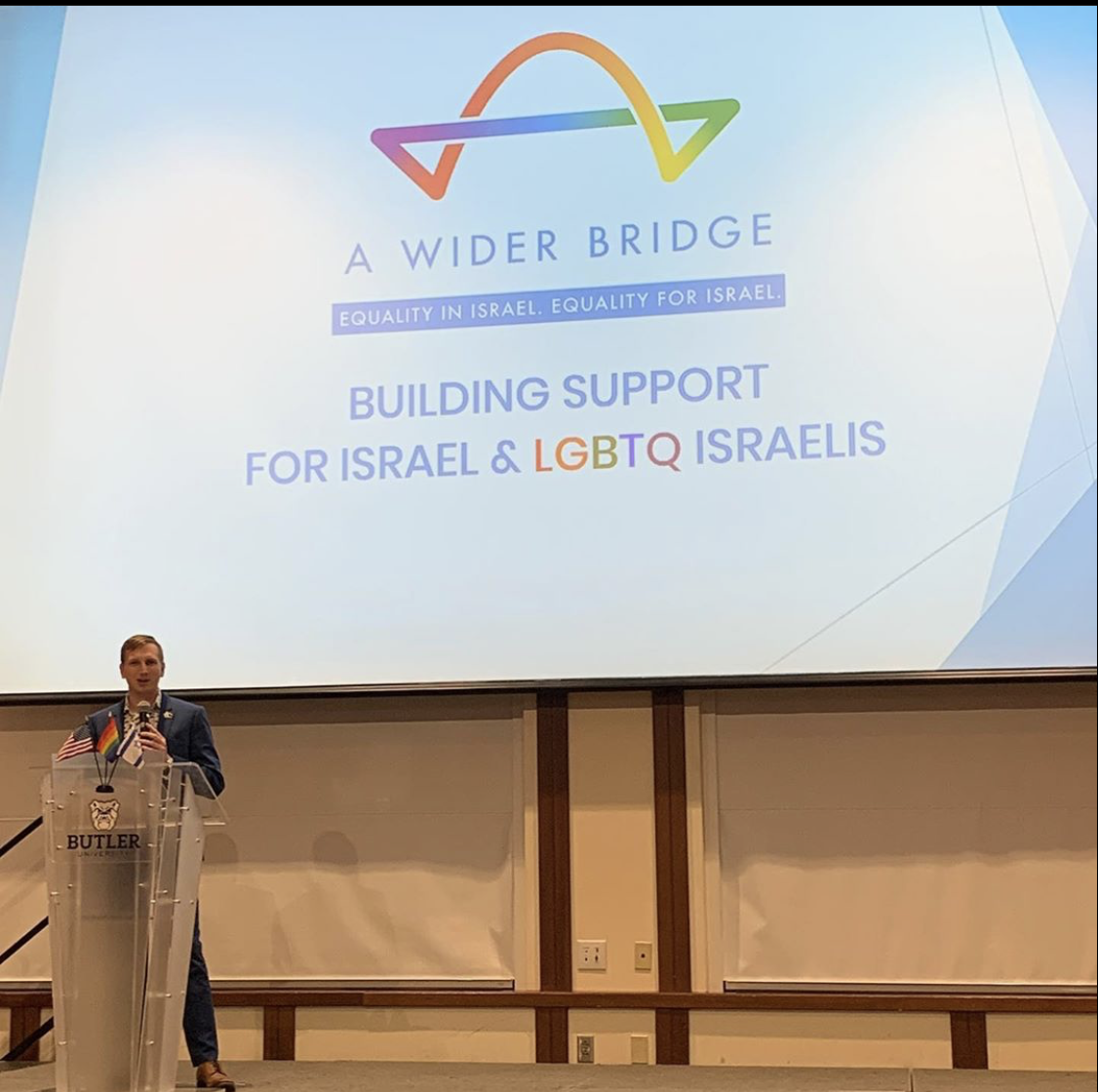 The event at Butler hosted Quentin Hill, a representative from A Wider Bridge.

On Feb. 19, Butler University Hillel held an event in the Reilly Room called “The LGBTQ+ Rights Movement in Israel,” in which Quentin Hill, the national outreach director for A Wider Bridge, spoke.

A Wider Bridge’s website states they are an “organization working through education, advocacy, relationship-building and grant-making to create equality in Israel by expanding LGBTQ inclusion in Israel, and equality for Israel by cultivating constructive engagement with Israel.”

Butler Alliance and Butler’s chapter of Students for Justice in Palestine publicly expressed disapproval for A Wider Bridge and the event. The organizations sent out a joint press release on Feb. 17.

One of the organization’s four stated values is pluralism and diversity. The values of A Wider Bridge align with the notion that societies improve when they include and value those with different backgrounds; this includes people with different gender and sexual identities, cultures, political opinions, and religions. Specifically, A Wider Bridge believes that those who identify within the LGBTQ+ community are imperative to Israeli’s success as a just and undivided society.

However, in the statement, SJP said A Wider Bridge is part of Israel’s “pinkwashing” campaign.

Pinkwashing, according to a journal article written by Corinne E. Blackmer and published by Indiana University Press, refers to “Israel’s putatively dishonest abuse of its sterling record on LGBT human rights to conceal or ‘whitewash’ its struggles with the Palestinians.”

Madison Pines, a first-year elementary education major and Hillel Israel education chair, worked to schedule and organize the event. Pines said the event was not meant to take a stance on pinkwashing, and that the speaker “did not talk about pinkwashing at all.”

The event qualified as a Butler Cultural Requirement, which are cultural activities students must attend before graduation. The press release stated that qualifying this event as a BCR is problematic because it goes against the purpose of BCRs, which aim to expose students to cultural and artistic learning opportunities as a means to enrich their Butler education and increase engagement with public intellectual life.

The press release asked that parties who approve events for BCR status look more closely at events and the values they promote, specifically “those that might impede the progression of another’s culture.”

SJP reached out to Alliance after they developed their initial statement. SJP president Roua Daas, a junior psychology and French major, said reaching out to Alliance was an easy decision since they had previously worked with them on past events.

“We talked about like how important it is for us to stand in solidarity for something like this, of course, just as people that fight against discrimination of any form,” Daas said. “It’s important to look at it through an intersectional lens and so we decided that we’re going to put up the statement.”

The press release said that most of A Wider Bridge’s funders have contradictory perspectives, and are instead “tied to right-wing, anti-muslim, anti-gay, hate-endorsing organizations” that donate large amounts of money to “homophobic, racist and oppressive practices.”

The funders Alliance and SJP refer to in their press release include The Paul E. Singer Foundation, The Jewish Community Federation and Endowment Fund and the Charles and Lynn Schusterman Family Foundation. These funders can also be found on A Wider Bridge’s “Our Institutional Funders” website page.

The Paul E. Singer Foundation makes donations in the name of Paul Singer, who personally donates to the Heritage Foundation, an anti-LGBTQ+ institution according to GLAAD. Similarly, Charles and Lynn Schusterman make personal donations to the Central Fund of Israel, which supports right-wing, pro-Israel initiatives.

According to The Forward, a Jewish-American newspaper, The Jewish Community Federation and Endowment Fund has made donations to far-right and anti-Muslim groups. The organizations the JCF has made donations to include Turning Point USA, The Heritage Foundation, ACT for America and the Center for Security Policy.

According to the Anti-Defamation League, an international Jewish organization, Turning Point USA spokespeople, activists and members have been connected to or have made pro-white, anti-muslim, anti-immigrant and anti-LGBTQ+ comments. ACT for America is considered one of the largest anti-muslim groups in the U.S. by the Southern Poverty Law Center and the ADL. The Center for Security Policy was founded by Frank Gaffney Jr., anti-muslim conspiracy theorist according to ADL.

While Pines said she was not the best person to speak on A Wider Bridge’s funders, she said the event was not intended to target any group at Butler.

Stephanie Skora, who describes herself as “an organizer, writer, Ashkenazi Jewish trans woman and dyke who organizes for Palestinian, Jewish, queer and trans justice and liberation,” spoke at Butler on Nov. 6 about pinkwashing. The event was held by SJP and Alliance.

One topic Skora went in-depth about during the event was A Wider Bridge. SJP’s public relations officer Reilly Simmons, a senior international studies, political science, and Spanish triple major, said it felt too coincidental when it was announced that a representative from the A Wider Bridge would be speaking on campus. Simmons said she felt like the event was a “direct retaliation.”

“We were like, ‘All right, like should we do anything about it?’” Simmons said. “We felt like at the end of the day, yes, because our mission is to stand against discrimination in any form and especially with Stephanie literally addressing A Wider Bridge specifically in her presentation. We were like, ‘Yeah, there’s no way that we can not do anything.’”

Pines said the reaction to the event was upsetting because she hoped people would approach the event with an open mind. She said Butler Hillel tried to be careful in the event’s marketing and wording.

“We weren’t trying to offend anyone or cause any controversy on campus, which is why we brought in Quentin because he has an education background and he’s been trained to do this professionally,” Pines said. “So all of his information is very much fact-based and there is not an emotional side. We were very careful with who we chose to bring onto campus so we would have liked if they would have come in with an open mind. But of course we’re never going to agree on situations like that.”