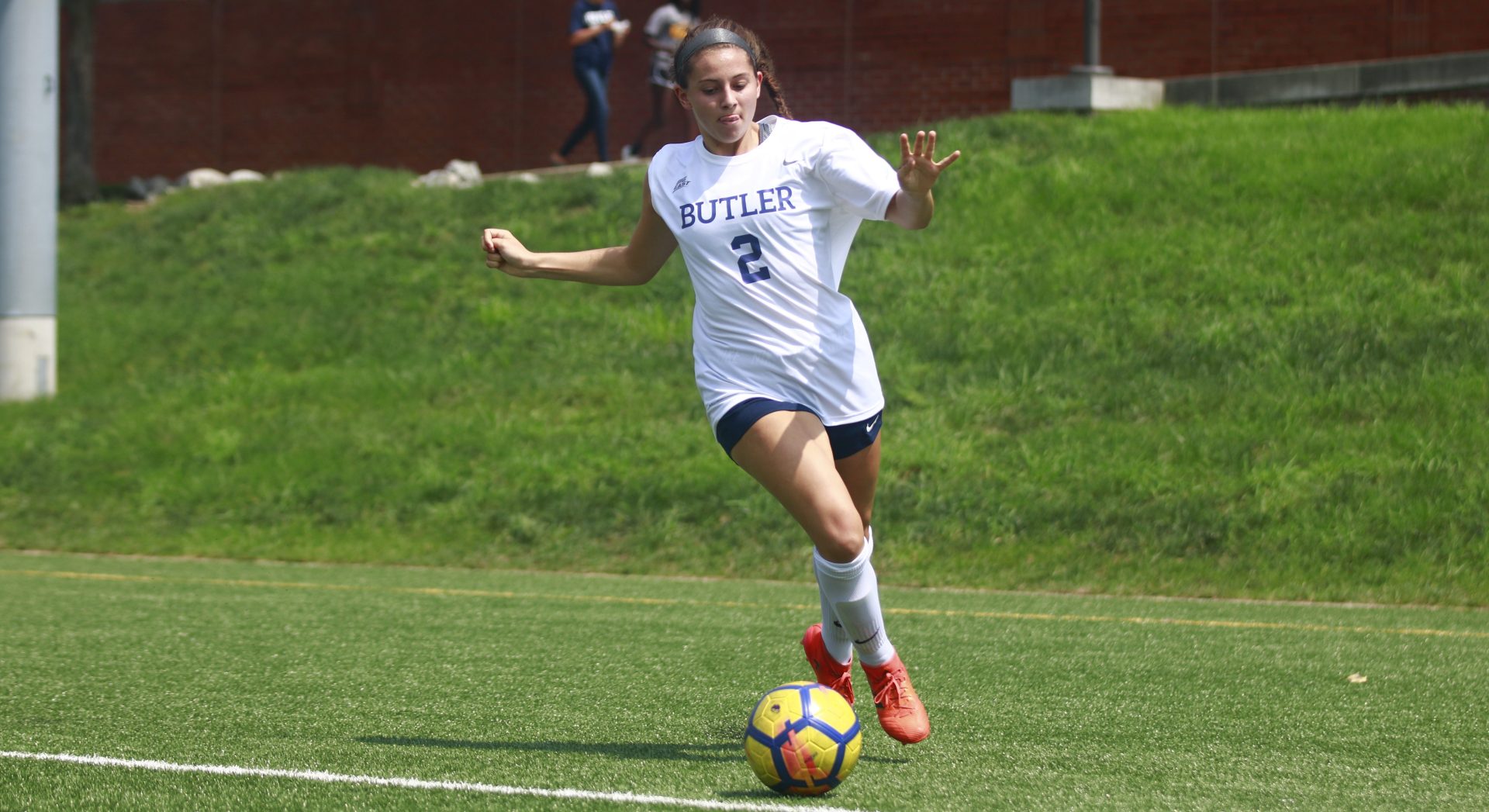 Katie Soderstrom plays the ball in a match last season. Soderstrom will be the leading goal scorer back for the women’s soccer team when play resumes. Collegian file photo.

Butler was running out of chances.

In the 93rd minute of a game against Creighton on Nov. 10, 2019, the ball rebounded off the goalkeeper, into the feet of forward Anja Savich, who passed it to midfielder Katie Soderstrom.

In true Soderstrom fashion, she knocked the ball into the back of the net for the win, her second of three game-winners at Butler.

“This was the first time and experience of scoring the goal and everyone just erupting from the sidelines and running and dog piling on the field,”  Soderstrom said. “It was just such a fun experience to be a part of, and I loved that.”

The goal for Soderstrom was not her first and surely won’t be her last.

In 19 games last year, Soderstrom co-led the Bulldogs with eight goals —  three of which were game-winners — and she led the team with seven assists, and as a direct result, was selected to the All-Big East First Team.

“I think she’s got some big things ahead of her,” Butler women’s soccer co-head coach Rob Alman said. “She’s scored some big-time goals for us and had some big-time moments. We are hoping for more of those to go.”

What sets apart Soderstrom from other players is her attacking mindset.

“You know when she’s in full flow, she’s an absolute nightmare to play against,” Alman said. “As a coach, it’s fun to watch her just go into that mode and effectively torment defenders and just be relentless with it.”

“She always tells me to go at people on the field and attack them and she’s always giving me confidence to just do what I’m best at and never stop trying,” Farnsworth said.

Soderstrom did not develop this mindset on the pitch when she got to Butler, however. It’s been the way she’s played her whole life.

Growing up, Soderstrom loved all sports and played several, including basketball, soccer, cross country, track and even gymnastics for about eight years. Once she got to high school, Soderstrom knew it was time to make a choice and focus on one sport: soccer.

As an avid U.S. Women’s National Soccer Team fan, Soderstrom obsessed over Mia Hamm — wearing the same number nine on her club soccer teams, collecting every book about Hamm and donning her jersey.

“I got her autograph at a game one time and I was like ‘this is the coolest thing ever,’” Soderstrom said.

Growing up in Carmel, Soderstrom started playing soccer at 5 years old, and coaches quickly took notice of the potential she had.

Alman had seen Soderstrom play from the very beginning. Before Alman was on Butler’s coaching staff, he worked one of the summer camps at Butler where he happened to coach a young Soderstrom. Once she was a freshman in high school, the real recruiting began, with Butler beginning to watch her on a regular basis, tracking her progress.

The coaching staff knew right away how they could utilize her in their system. Her isolation play is by far one of Alman’s favorite parts about Soderstrom’s game.

It was at this point when Soderstrom realized she wanted to work towards playing at a school that she loved and could earn a scholarship to continue her soccer career at the next level.

During her collegiate career, she has been able to combine her blazing speed with her technical skills to become a dominant force on the field that can compete against the top teams in the nation.

“I think she just raises our level of play so much,” Farnsworth said. “Like she’s such a good player — she plays with so much pace and intensity that it just rubs off on everyone else.

Senior defender Julia Leonard described how many times Soderstrom will make a play that leaves all of the players’ jaws on the floor.

“She will make this insane cross and go flying off the field on the ground, and then we will score and all of us go over there and start dog piling her as she’s on the ground because she just threw her body on the line for the team,” Leonard said.

To pair with Soderstrom’s attacking play on the pitch, her personality also shines through her game with unique pre-game rituals.

For home and away games, Soderstrom likes to wear different cleats — one pair for home games and another for away games.

“It’s mostly for the aesthetic because I like the colors of the cleats,” said Soderstrom, “but it’s just like a thing now that I stick with.”

Soderstrom also likes to make sure she takes time to visualize before games. Whereas a lot of players are social before game time, she uses this time to relax and refocus before the match starts.

While some players might be intimidated to take a leadership role as a freshman, Soderstrom’s personality and competitive drive enabled her to step right in and make a mark.

In the summer before freshman year, Soderstrom had texted her new teammates, reminding them to be confident — before she even knew what was in store for herself. Soderstrom appeared in all 20 games, scoring two goals including one game-winner and four assists. Then, after a successful freshman season, things skyrocketed.

She has been able to take huge strides forward both in measurable items like stats, but also the more intricate pieces to her game including her understanding of the game. Seeing former teammates like Macy Miller and Annika Schmidt go abroad to play professionally sparked interest in Soderstrom’s future aspirations.

“That’s something I never really considered, but I’m seeing all the things they are doing and it just seems like a really cool experience,” Soderstrom said. “I think it would be really cool to go play soccer in Europe because that is something that would be so fun, to travel and experience their culture.”

Soderstrom said she thinks it would be amazing to be one of the 40 people drafted into the National Women’s Soccer League, but is still intrigued by playing abroad. For now, having had surgery this past November, Soderstrom is simply ready to keep attacking for the Butler Bulldogs.