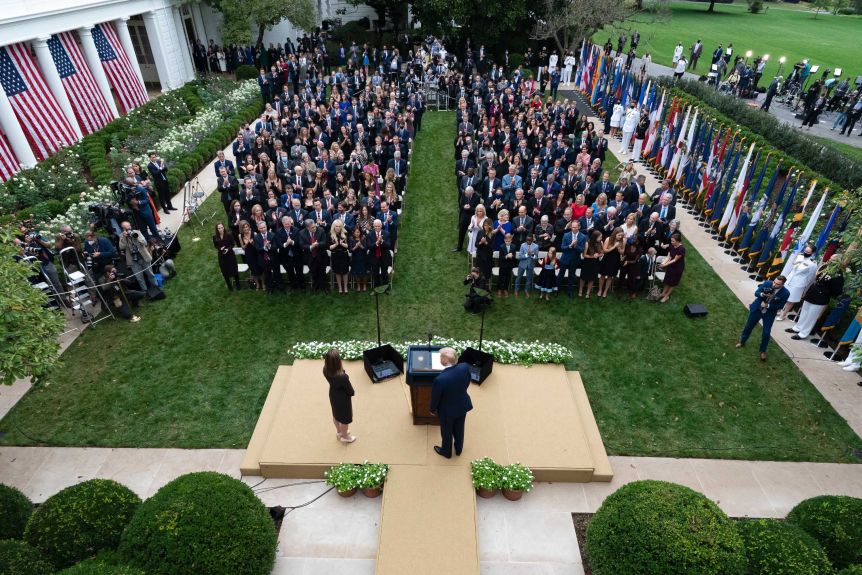 On Sept. 26, Trump held a ceremony in the White House Rose Garden to announce his nomination of Amy Coney Barrett, a circuit judge on the U.S. Court of Appeals for the Seventh Circuit and a professor at Notre Dame Law School, to replace Ruth Bader Ginsburg on the Supreme Court. Since this event, several attendees have tested positive for COVID-19, in addition to other Trump campaign officials.

After aide Hope Hicks tested positive on Thursday, the president and first lady were tested. At 12:54 a.m. on Friday, the president announced via Twitter that he and his wife, Melania, had tested positive for COVID-19. Doctors reported the president had a fever on Thursday night and Friday, and on Friday evening, Trump was flown by helicopter to Walter Reed hospital in Bethesda, MD. After being admitted, he spent around three days in the six-room presidential suite at the hospital. Melania Trump is recovering at the White House residence.

The president is receiving a number of medications, including remdesivir, a drug by Gilead Sciences that has been used to treat coronavirus patients since May 2020. Trump has not received hydroxychloroquine, the malaria drug that he has advocated for as a COVID-19 treatment in the past.

On Oct. 4, Trump did a brief drive-by through outside the hospital, publicly appearing before supporters who had gathered outside Walter Reed. The president has received backlash, as many believe that he was unnecessarily endangering the secret service agents accompanying him.

In the afternoon of Oct. 5, Trump was discharged from the hospital, taking to Twitter to tell his audience not to let the virus “dominate your life.” Trump has said that he intends to attend the presidential debate in Miami on Oct. 15, but this statement has also received backlash from medical professionals and the mayor of Miami, who expressed concerns over the president traveling to the city while potentially contagious.

In the days leading up to his diagnosis, Trump attended numerous events, including the presidential debate on the evening of Sept. 29. At this event, the Trump entourage arrived too late to be tested, and most declined to wear masks, despite being asked to by Cleveland Clinic staff. On Sept. 30, Trump attended an outdoor rally in Minnesota, and on Oct. 1, the president attended a fundraiser in Bedminster, NJ.

Hicks, Trump’s former communications director and a current aide to Jared Kushner, reportedly began to feel unwell on Wednesday, Sept. 30 and quarantined on Air Force 1 on the return journey from the Minnesota rally. Hicks was not in attendance at the Rose Garden event on Sept. 26, and tested positive on Thursday evening.

Senators Thom Tillis and Mike Lee, Republicans from NC and UT respectively, both announced that they tested positive on Oct. 2. Both senators attended the Rose Garden event on Sept. 26. Bill Stepien, Trump’s campaign advisor, and Ronna McDaniel, the chairwomen of the Republican National Committee, tested positive on Friday as well.

Former NJ governor Chris Christie, who also attended the Sept. 26 event, tested positive for the virus on Oct. 3 and was admitted to Morristown Medical Center as a “precautionary measure,” according to a tweet by Christie. Republican Senator Ron Johnson from WI also tested positive on Oct. 3. Since then, he has stated that he will attend the vote to confirm Supreme Court nominee Amy Coney Barrett even if he has to wear a “moon suit” to be present.

There have been new cases emerging in the president’s circle every day. Even though Trump has been discharged from the hospital, his physician said that he is “not out of the woods” yet. There will likely be new cases among Washington officials in the coming days.