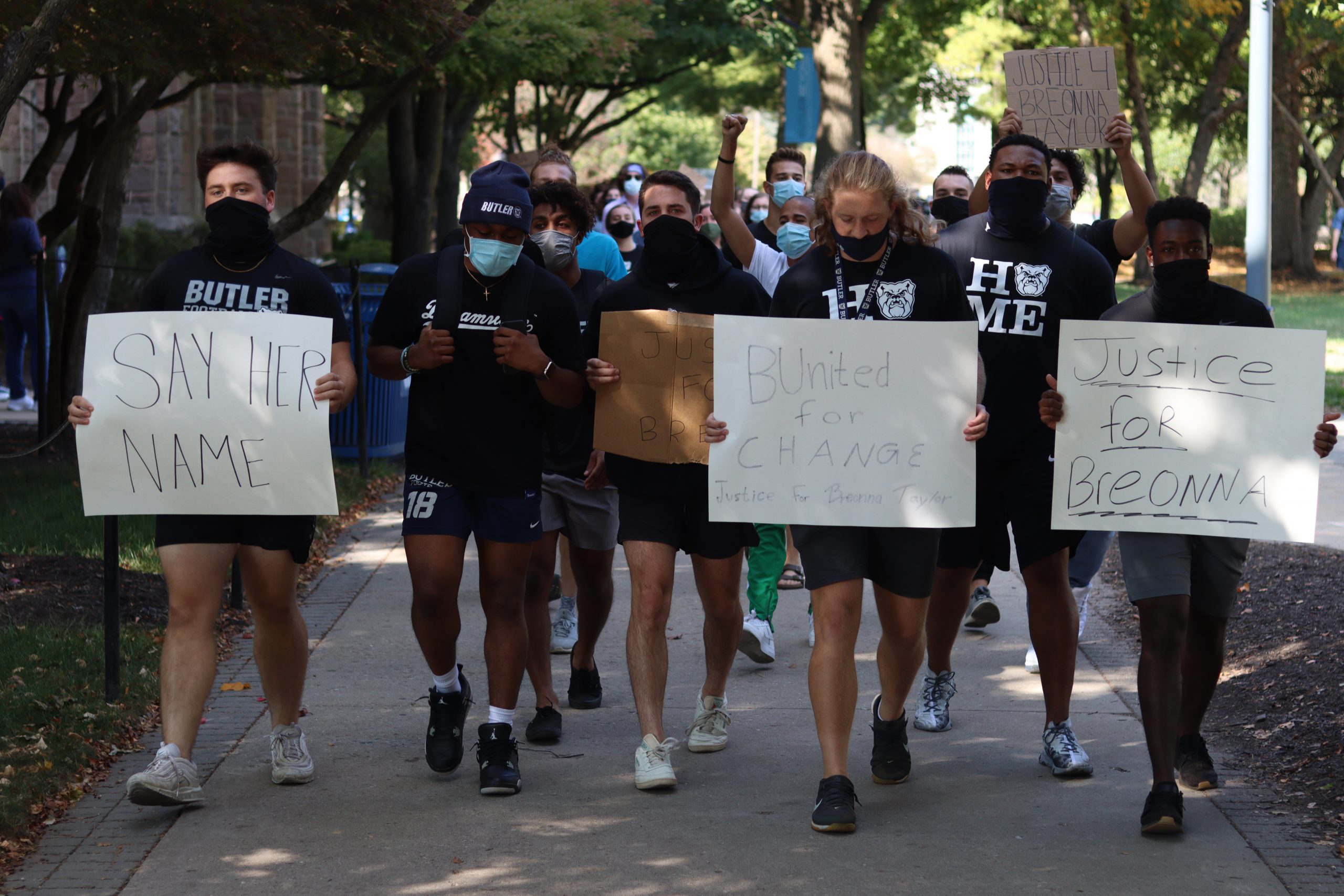 Butler students participate in the protest for the Black Lives Matter movement on Sept. 25. Photo by Julian Cirnigliaro.

Recent campus protests have left many students wondering how to voice their opinions at Butler University. While some students felt the protests were a distraction from learning, other students found that participating in counter-protests gave them a way to exercise their right to free speech.

The American Bar Association, an organization committed to advancing the rule of law and upholding the Bill of Rights, explains that, in addition to providing strong educational resources, universities should allow students the opportunity to “engage with others’ perspectives and experiences and develop and advocate their own philosophies.”

To facilitate an atmosphere like the one described by the ABA, certain guidelines should be followed. As such, four Bulldogs have given advice on how to maintain proper campus protest etiquette.

One major concern with any social gathering or event right now is the risk of COVID-19. Sabrina Stock, a sophomore psychology and English double major, was at the Sep. 23 anti-abortion demonstration to counter-protest. Stock said there are potential physical and mental risks while protesting.

“The university should try to send out notifications regarding a protest in case [students are] in a bad headspace and the topic is triggering,” Stock said. “And it’s also just a COVID risk to have people on campus that aren’t on campus anyways. So they can stay away from [the protest] if they feel unsafe.”

Butler’s website states peaceful protests that follow university guidelines are allowed on Butler-owned property as long as they follow the outside speaker policy. This policy includes registering with the university six weeks prior to the demonstration. However, any group following Indiana law on public property near campus cannot be restricted by the university.

Some protesters bring graphic images with them, which can be shocking and triggering. Stock recommends that students who know they will be triggered by content avoid the area of the protest. On the other hand, she also recommends that active counter-protest members bring food and water with them, and that they know their own limits when it comes to protecting their mental health.

Spread awareness of any protests

While Butler sent out an advance notice regarding the Sep. 23 demonstration against abortion, the university does not always send advance warning of demonstrations. In fact, the lack of a university email regarding the Oct. 12 religious protests left many students questioning Butler’s prior knowledge of the event.

Miranda Dehaai, a sophomore exploratory business major, is one of those students; she expressed her desire to be informed by the university if at all possible.

“[Butler] should try to inform [students] regardless of what the protest is for,” Dehaai said. “There’s different people with different opinions who might want to avoid it.”

If no public notice is made, students can still help protect fellow students by spreading the word themselves. Group chats and social media are popular ways to inform large groups of people about demonstrations and protests happening on or near campus. Not only does this protect students who wish to avoid the demonstration, but it also allows others an opportunity to exercise their right to counter-protest.

Stock recommends that the university include the subject, location and time of any scheduled demonstrations.

Furthermore, in the event of a protest, students should look to different student organizations for help and information. Grace Jackson, a junior political science and environmental studies double major, said the resources were helpful for students who wished to avoid the protests altogether.

“The Desmond Tutu peace lab made a map of campus [that] showed alternative routes,” Jackson said. “So if you were ever triggered by these images, you could [know] which routes [to] avoid.”

Grace Calabria, a junior middle and secondary education and English double major, expressed pride in how Bulldogs have already upheld the Butler way in their counter-protesting on Sep. 23. She said students and members of the off-campus group were able to peacefully talk about each other’s views on abortion without yelling or being disrespectful.

Calabria said the group later exaggerated and put a different context on the actions of Butler students at the counter-protest on the group’s Instagram account. She explained that it is still important to keep interactions respectful on social media formats, especially as platforms such as Instagram are only growing more popular.

To ensure that Butler students continue to show respect in their protesting and counter-protesting, students should note the campus code of conduct and sound amplification device regulations.

One of the most important aspects of campus protest etiquette is to come together and protect the student community. Whether that be through spreading information regarding protests online, seeking out advice from protesters with more expertise, or reaching out to a group if images are triggering, Grace Jackson recommended seeking community as a top priority.

“If you are at all in a situation where images, speech, or anything triggers you mentally or physically or in any way, seek community,” Jackson said. “Seek people around you that are your friends and your family, and that support you because [handling that situation] can be very difficult.”

Jackson recommended reaching out to groups geared towards working through mental and physical trauma for students finding themselves triggered by a campus protest, such as Counseling and Consultation Services or the Center for Faith and Vocation. Furthermore, both Dehaai and Stock recommend that students should not engage protesters on the opposing side if these protesters are not being civil and respectful.

“If you do decide to engage in whatever way, assuming you’re being respectful about it, as the other party should be and you do find that the opposite party is being too aggressive, if they are yelling at you, or saying extremely cruel things or untrue things, just get away,” Stock said. “You can’t engage with people who are not willing to respect you as a human being.”

To learn more about protest etiquette, students can reach out to organizations that have coordinated successful protests or counter-protests, or to people who have been a part of these demonstrations. Grace Jackson recommends the political science professors on campus, especially those who teach activism classes. Protest etiquette guidelines can facilitate a direct, respectful and peaceful protest with the potential to influence a world of change.