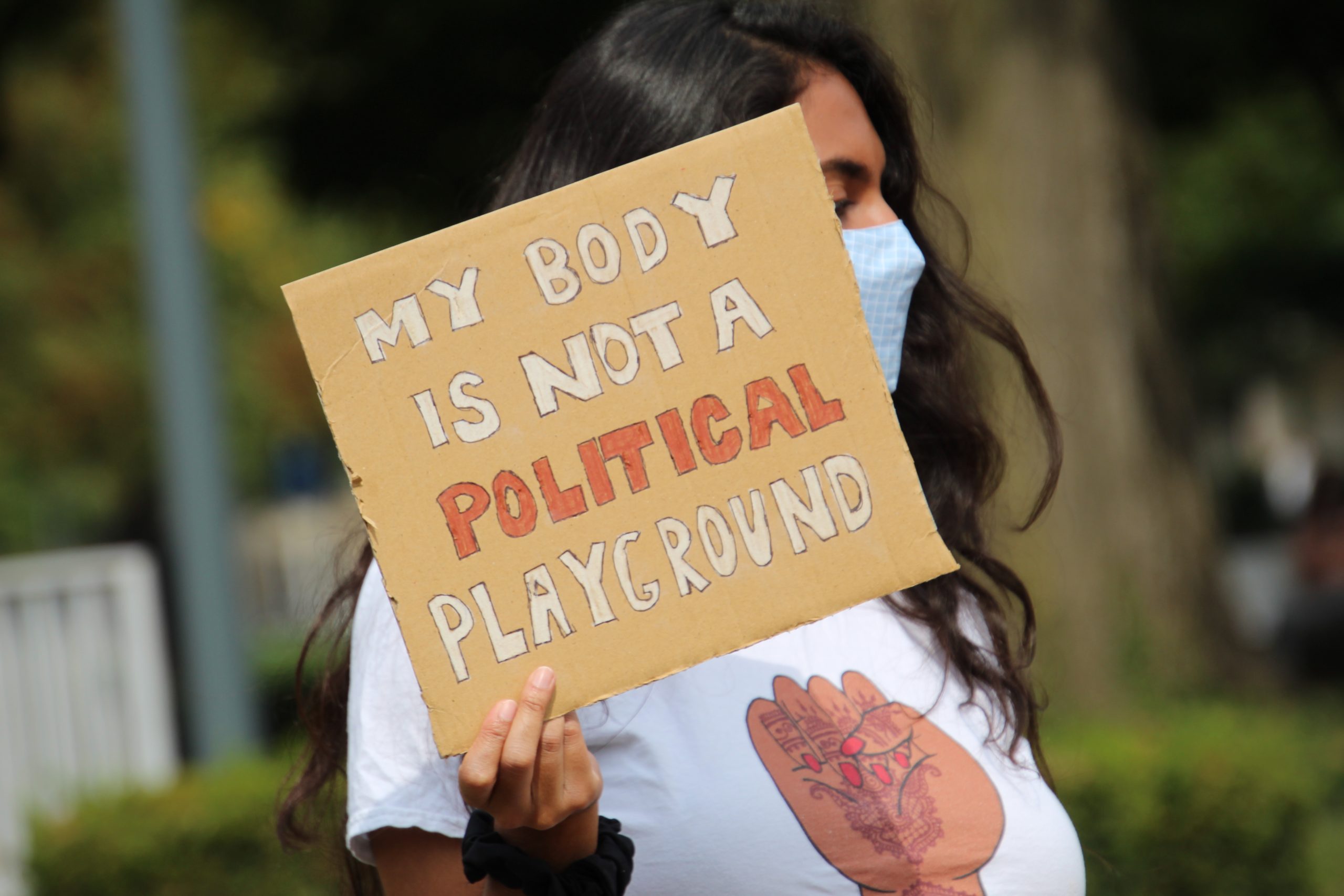 On Wednesday Sept. 23 anti-abortion demonstrators from the organization Created Equal, based in Columbus, OH visited Butler’s campus. Representatives from the organization stood on the sidewalk of Hampton Drive between Atherton Union and ResCo, displaying images and speaking to students passing by. Several Butler students participated in a counter-protest, some were there with organized groups while others happened to be there.

Created Equal has visited Butler’s campus several times before, but this was the first time in recent years that there was a counter-protest. Created Equal is allowed to protest on this spot on campus as it is public property, while the rest of campus is private property.

Butler warned students about the protests with an email on Monday Sept. 21, explaining that the demonstrations are allowed on campus due to the Constitutional right to freedom of speech. The dean of students office set up signs on either side of the demonstrators telling students to either have a civil discussion or avoid the demonstrations altogether.

The Collegian interviewed individuals from both demonstrations, asking each individual the questions below:

Why are you here today?

“I’m here today because I do think everyone has the right to free speech, but I do find it a little insensitive that they are displaying graphic images that might have a really negative effect on our students’ mental health,” sophomore psychology major Angie Zara said. “They don’t go here. This is our campus; our home. I also fundamentally disagree with them, but I know that’s their right.”

“We are here today to expose the reality of abortion,” Lexi Hall, a 19-year old Created Equal employee, said. “Most people believe that abortion just gets rid of a clump of cells or a blob of tissue, but by showing the truth of abortion, you can clearly see these are not just a clump of cells, this is not just a blob of tissue, it’s a human being that is being brutally murdered through abortion. We’re also here to talk to people and have educated conversations; civil conversations, in hopes to change their minds on abortion and really start the conversation on this college campus and all around the nation.”

What is your personal stance on abortion?

“I’m pro-choice as in everyone’s right to choose, not pro-abortion,” Zara said. “I don’t think it’s a good thing, but people have their own reasons and I don’t think anyone should be told what to do with their body. I also believe in separation of church and state, and I think a lot of [pro-life] reasons are based in religious beliefs and I don’t think that should be inflicted on anyone else.”

“Abortion is the intentional killing of an innocent human being and therefore abortion is always wrong,” Hall said. “Right from fertilization, that’s when human life begins: a single-cell zygote. It meets the standard of life so we are opposed to any killing of that human being from then on.”

Why is it important to discuss this issue specifically on Butler’s campus?

“Since we’re all coming in from… different places, different backgrounds, I believe it’s important to have this conversation,” sophomore psychology major Quinn Davis said. “Personally, I went to a Catholic high school and they forced their pro-life opinions on me and other students, so I think it’s important to have this conversation on Butler’s campus so that everyone can form their own opinions for themselves and understand each side of the movement.”

“We actually travel all across the country with our organization,” Hall said. “We don’t usually target certain universities, it’s basically just because this is in Indiana, and we’re going to other ones as well. We have gone to two other [universities] this week. We also go to other events; like if there’s a rally or something like that we’ll go there. We also go to high schools as well and stand outside the high schools and talk to the high school students.”

Aside from being here today, what are you doing to support your stance on abortion?

“We also go out to the abortion facilities and talk to women as they go inside, kindly introduce ourselves to them and offer them help from the crisis pregnancy centers that are usually right next door or down the street from the abortion facilities,” Hall said. “Tell them that we’ll be there for them, help them physically, financially, whatever it may be, help them through adoption if they so choose. So we do that as well, and we non-stop talk about abortion in other places and just support women who are in need.”

Why is abortion an important issue in this upcoming election?

“Trump supports anti-abortion, and we have to settle for Joe 2020 because he will advocate for more rights for women as well as minorities,” Isabel Austin, a first-year computer science major said. “This is important because if we outlaw abortion, it’s only going to outlaw safe abortions.

“This election is super important because we have two candidates: Joe Biden and Donald Trump,” Hall said. “Joe Biden is in support of abortion up until birth and even after birth, so that is a very radical view. [EDITOR’s NOTE: Joe Biden has not expressed support for late-term abortions or infanticide.] Even most people that I’ve talked to today on your campus aren’t in support of that… Where we have, on the other hand, Donald Trump who is in support of life and trying to protect the pre-born and protect all human rights. We don’t advocate for one candidate over the other, but we do encourage people to vote anti-abortion, vote for people who will seek to end abortion, seek to protect all human life.”

If you were triggered by any of the images displayed on campus during the demonstration or by content in this article see the resources below.