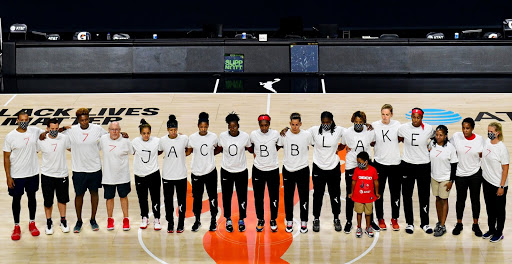 “As athletes, we would be discrediting our essence if we didn’t use that platform for good and for change,” Nneka Ogwumike, a Los Angeles Sparks player, said on Aug. 30.

A response to President Donald Trump’s snide reference to the NBA as a “political organization” after athletes spoke out against police brutality and boycotted games this past week, Ogwumike’s statement perfectly captures the legacy of sports athletes carry on today.

Sports and societal oppression are inextricably linked. In ancient Rome, sports fans gathered in arenas and stadiums to observe gladiators brutally fight. Athletes were typically convicts, prisoners of war, individuals purchased from slave markets or others considered to be socially inferior — though some athletes were able to make a name for themselves in the arena.

Considered professionals, they were trained to skillfully fight and occasionally kill, risking their lives and wellbeing to entertain wealthy elites and the Roman masses. While they were often celebrated and memorialized for their athletic prowess and bravery by elites and average citizens alike, they were still regarded as members of the lowest tier of society, at least until they earned their retirement and, in turn, their freedom.

Likewise, the American sports industry oppresses and silences athletes, all while exploiting their bodies for a similar kind of commercial entertainment. Throughout time, Black athletes and other athletes of color, women athletes and queer athletes have been excluded from competitive sports altogether. When protesting against wars and alongside social justice activists, athletes have been formally silenced or punished by sports governing bodies like the International Olympic Committee for getting political.

Historically, we can look to well-known examples like boxer Muhammad Ali, who passionately opposed the Vietnam War and refused induction into the U.S. Army, citing his religious beliefs and identity as a Black man, a Black Muslim, in America. Following his protest, he was stripped of his heavyweight title and suspended from boxing, effectively cutting off his source of income. Years later, at the 1968 Olympics in Mexico City, American sprinters Tommie Smith and John Carlos, shoeless, iconically bowed their heads and each held a gloved fist in the air on the winner’s podium, a symbolic nod to the U.S. Civil Rights movement. They were then forced to return their gold and bronze medals, removed from the U.S. Olympic team and banned from Olympic Village.

Tommie Smith and John Carlos, gold and bronze medalists in the 200-meter run at the 1968 Olympic Games, protest anti-Black racism in the United States atop the victory stand. Each wears a black, leather glove, raises their fist, stands shoeless and bows their head. Bettmann/Bettmann Archive

The previous year, in 1967, women weren’t allowed to participate in the Boston Marathon, so Kathrine Switzer entered as K.V. Switzer to conceal her gender. Two miles in, an official tried to physically remove her from the course, pulling at her arms and clothing. She finished anyway, becoming the first woman to officially complete the race.

More recently, we’ve seen current athletes continue these same fights. The WNBA, women’s tennis players and the United States women’s soccer team have been fighting against gendered wage discrimination for years, trans athletes have had to fight to even compete and, in the past few years, USA Gymnastics athletes have spoken up about sexual abuse and the organization’s negligence. And four years ago, Colin Kaepernick knelt for the national anthem before NFL games in a protest against police brutality for the first time.

Over the summer and within the past week, we’ve seen several professional athletes, teams, sports leagues and team owners continue the legacy of sports activism, speaking up in support of the Black Lives Matter movement and recent victims of police brutality.

In June, the NFL contrasted its past resentment toward Kaepernick by endorsing the Black Lives Matter movement and committing $250M over a 10-year period to help combat systemic racism. While this could likely be reduced down to a wise business decision, it is nonetheless a significant step toward finally backing the professional football players the league profits from.

And just last week, following the police shooting of Jacob Blake in Kenosha, WI and the killing of two protesters, the Milwaukee Bucks boycotted Game 5 of their first-round playoff series against the Orlando Magic. This move sparked a kind of unified labor strike by athletes and teams across multiple sports leagues.

For the first time ever, walkouts found their way to the WNBA and to predominantly white sports like professional tennis, soccer and hockey. Even Major League Baseball games were postponed because of protesting players. Shifting from quiet protest, with league-endorsed slogans on basketball jerseys, athletes are taking an actionable stand — something that cannot be ignored.

Unsurprisingly, this recent support for the social movement has been met with backlash similar to what Colin Kaepernick faced in 2016. From Trump’s statements to your Nike-burning local, many Americans are done supporting the NFL, NBA or really any sports league with some connection to BLM — at least as long as athletes and sports organizations continue to align themselves with the social justice movement.

In an attempt at protesting, supposed “sports boycotters” have taken to social media in the past couple of months, sharing their thoughts via Facebook copy-and-paste challenges or spiteful tweets suggesting they have decided to stop watching football from their recliner each Sunday in order to support United States veterans and the American flag instead.

In all seriousness, though, I’m not shaming these so-called boycotters for supporting veterans. United States servicemembers and veterans are often treated horribly by the state and others. Earlier this summer, for example, the remains of Fort Hood specialist Vanessa Guillen’s body were found months after she was sexually harassed, murdered and buried by fellow soldier Aaron Robinson and his girlfriend Cecily Aguilar — an event representative of the abuse women frequently face as members of the military.

Likewise, the military is known for its hostility toward LGBTQ+ Americans willing to enlist or already enlisted. Echoing President Bill Clinton’s “Don’t’ Ask, Don’t Tell” policy, throughout his term, President Trump’s administration has made it their mission to bar trans citizens from enlisting in the military using their preferred gender identity. Additionally, despite recent progress, unsupported veterans continue to experience homelessness, service-related mental illness and substance abuse.

I don’t intend to suggest servicemembers and veterans don’t experience hardship or aren’t frequently disrespected. Rather, noting the political undertones at play, I’m calling sports boycotters out for attempting to obscure their racism with patriotism and hollow support for veterans, appropriating a term used by actual activists, particularly civil rights activists.

It’s bitterly ironic of sports boycotters to protest athletic activism — first of all, for good reason, sports have always been political, so failing to recognize that is incredibly shortsighted. Sports have long given athletes a platform to speak out against societal injustice and exploitation, sports-related or otherwise. This is well-documented and well-known.

Despite this, though, some sports fans still expect athletes they praise for their athletic success and physical strength to, well, shut up and stick to the field — or court, or ice, or whatever else — à la Ancient Rome.

This isn’t totally uncommon; many fans of other celebrities also get uncomfortable when the topics of progressive politics or social justice are mentioned. With sports, though, there are arguably different factors at play — as mentioned above, sports are undeniably connected to the exploitation of societally-marginalized people and their bodies.

Whether an athlete is a kid promised a future of pro-football wealth and fame in high school or a young gymnast whose coaches and parents become so obsessed with the idea of success they sacrifice a child’s wellbeing, athletes often put their bodies and health on the line to achieve their goals. That shouldn’t come at the cost of one’s ability to engage in politics or social justice — otherwise, athletes really are being treated like objects of entertainment.

This is especially problematic considering the demographics of the sports industry; most NFL players are Black, while most coaches and team managers are white men. Most NBA players are also Black, while most head coaches are white. Likewise, most WNBA players are Black, and most professional level staff are white, though most are also women. But most sports reporters and sports fans are white men, meaning a majority white, male audience consistently reports on and consumes the athleticism of predominantly Black men and women.

Being an athlete is a career like any other — yes, athletes are hired and paid, sometimes very well, to do their jobs as best they can. But since sports is also about entertainment and, ultimately, profit, the implications of majority-white audiences watching majority-Black athletes succeed is important to note, especially when portions of those audiences then object to league accountability and racial justice.

Best put by writer and television producer Thad Mumford: “Is there a possible connection between the actions of the white fan who cheers rabidly after sack dances on Sunday, then may be reluctant to grant bank loans for black businesses on Monday?”

Second of all, sports boycotters’ so-called activism is half-baked. The intersection of the COVID-19 pandemic and widespread Black Lives Matter protests has made it painfully clear how contradictory conservatives are. In less than six months, we’ve seen some conservatives protest mask mandates, claiming their first amendment rights are being infringed upon, just to turn around and denounce mass protests against racial injustice.

We’ve seen heavily armed citizens enter state capitols and scream in the faces of capitol-building police, only to turn a blind eye to police brutalizing protesters and killing Black Americans or less than a month later. And now that athletes are using their voices, protesting peacefully as many of these same people have suggested activists against racial injustice ought to do, they once again decide to engage in some kind of confused social commentary they call “activism.”

So in this case, it seems our military-obsessed uncles and grandparents are really just upset athletes are defending their coworkers and, often, their own communities. Usually boycotting suggests action, but unlike the activism among athletes, there is no goal here — how does boycotting sports enact any change for the military?

This isn’t about the flag or the treatment of soldiers and veterans. They’re mistreated by the state too, and that’s incredibly simple to recognize. It’s about an obsession with watching the physical strength of politically and culturally silent athletes — it’s about their bodies, as if they’re objects, not their personhood.

Professional athletes often have incredible platforms, giving them the chance to speak on something important. Why is this bad? Shouldn’t we respect the wealthy and famous who do good with their money and fame, especially when it’s for the empowerment of communities? Or are we really that accustomed to wealthy elites with massive platforms — and jobs arguably less difficult than an athlete’s — hoarding their money, ignoring inequality and suffering?

We should be impressed some athletes are doing the hard work of activism when they’re only getting paid to play — and we should recognize the extra burden that’s putting on so many athletes and other American workers doing the same.

Of course not all conservatives, veterans or patriotic sports fans out there are boycotting sports — some either disregard the recent progressive activism of sports or are willing to learn and grow. But for those who aren’t, their resentment toward athletes is no more than a reaction to real, organized, goal-oriented activism.