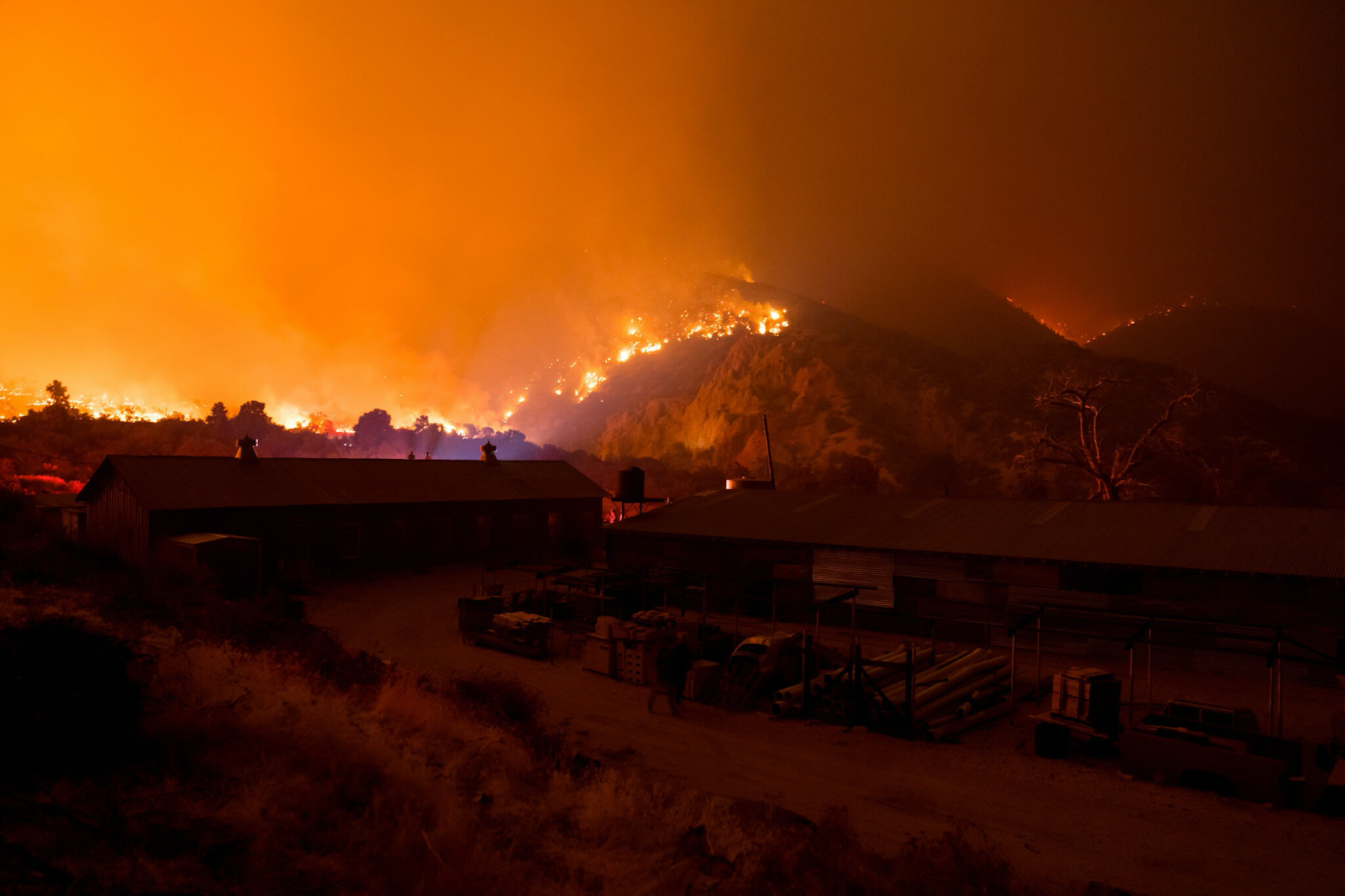 Photo courtesy of Eric Thayer for the New York Times

Between a  recession, pandemic and widespread protests against racial injustice, there is a lot to worry about for all of us this election season — though this certainly isn’t the first time systemic inequality, issues of healthcare and the economy have intersected.

Record numbers of people are unemployed, despite record highs in the stock market. Concerns about access to voting have been raised, and the president has talked about potentially ignoring election results. Many of our day-to-day experiences have changed with the sudden emergence of mask-use, social distancing and virtual meetings.

Now, wildfires blaze in western states and a new hurricane has hit the southern coast of the United States, bringing concerns about climate change to the surface of a campaign season that has largely sidelined the topic.

On Sep. 14, Wade Crowfoot, California Secretary for Natural Resources, addressed Trump, suggesting now is the time for unity during a roundtable discussion in McLellan Park, California on the wildfires.

“From our perspective, there is amazing partnership on the ground, and there needs to be,” Crowfoot said. “We’ve had temperatures explode this summer…we broke a world record in the Death Valley—130 degrees. [W]e want to work with you to really recognize the changing climate and what it means to our forests and actually work together with that science.”

Unsurprisingly, this led to a bit of banter — Trump responded to Crowfoot in denial, chuckling and smirking.

“I wish science agreed with you,” Crowfoot said.

This gave presidential nominee Joe Biden’s campaign an opportunity to respond during his speech addressing the wildfires, finally spotlighting the issue of climate change this campaign season — though, following pressure by environmentalists, Biden did list climate change as one of the four main pillars the U.S. needs to address alongside the pandemic, economic recession and racial injustice last month.

President Trump’s environmental reputation is historically dismal, and, honestly, I doubt anything is going to ever change that — not even his reelection prospects during a period of environmental distress.

Throughout his term, Trump has consistently dismissed climate change as a “hoax,” calling environmental activists “perennial prophets of doom” — which I honestly kind of like. As soon as it was possible, his administration backed out of the 2015 Paris climate agreement, suggesting it would “hurt the competitiveness” of the United States — the country will officially leave the agreement Nov. 4 this year, a day after the election. And the president’s administration has consistently pushed to increase oil, natural gas and coal output and eliminate rules on carbon emissions and governing clear air, water and toxic chemicals, calling them burdensome to business.

Trump did, however, change his mind about cutting funding for conservation this summer to sign the Great American Outdoors Act into law, the most significant investment in conservation the country has made in decades. But I’m not sure that will alleviate the effects of the extra 1.8 billion tons of greenhouse gases scientists expect the United States to pump into the atmosphere in the next 15 years following Trump’s rollback of climate regulations.

As for his current campaign, climate change is not mentioned, though his 63 bullet-point election agenda does make two relevant promises: “Continue to lead the world in access to the cleanest drinking water and cleanest air” and “Partner with other nations to clean up our planet’s oceans.” The United States is ranked 26th in the world on sanitation and drinking water, according to Yale University’s 2020 Environmental Performance Index, by the way.

Otherwise, his campaign has no real plan in terms of the climate. Rather, its primary focus is on promoting the economy at the expense of the environment — deregulation, free trade, economic competitiveness, manufacturing, jobs and the stock market.

What’s strange is he simultaneously claims to be a “great environmentalist,” citing his role in conservation, wildlife protection and banning some off-shore oil drilling. For obvious reasons, this is not wholly true, but it runs deeper than that.

The Trump campaign’s disinterest in addressing climate change as a legitimate concern only indicates the administration’s inability to respond to the needs of Americans; its shortsightedness in this area directly relates to its ineptitude in undertaking other key issues. The economy cannot be separated from the climate crisis, nor can the pandemic or white supremacy.

In many ways, Trump-endorsed economic policies and priorities are what got us into the mess of climate change. The political project of neoliberal deregulation gave corporations the freedom to accumulate enormous profits, all while treating the atmosphere like a literal trash can. At the same time, individual consumers have been told to think greener and change our lifestyles as best we can. This emphasis on the individual effectively diverts consumer attention away from companies contributing to the majority of the world’s greenhouse gas emissions, limiting any kind of large-scale, collective response.

It’s confusing to uphold the wellbeing of the stock market as of utmost importance when its prioritization is harming our environment, and by extension, us. Record highs in the stock market, which seem to be many people’s primary concern this campaign season, don’t necessarily mean things are good in reality — not for the environment and not necessarily for the 29 million people who were receiving some form of unemployment as of mid-August.

Not to be a prophet of doom, but, for many of us, the wellbeing of the stock market won’t matter as much if parts of the country eventually burn to the ground or sink into the rising ocean — or if a pandemic continues to impact the health, work and businesses of many Americans. Even so, prioritizing the economy doesn’t have to be mutually exclusive from protecting our climate and acknowledging science; it’s illogical to turn a blind eye to the climate crisis, desperately trying to preserve something we can and should change.

Biden’s plans for the economy and climate are by no means radical, but they do acknowledge the situation we’re in, making history as the boldest plans for the climate from a Democratic nominee. First, his campaign plans to recommit to the Paris agreement the first day of his presidency and reinstate many of the environmental regulations Trump rescinded to improve business. Additionally, he plans to ultimately invest $1.7 trillion over a ten year period in clean energy and infrastructure, thus creating more jobs.

“If we can harness all of our energy and talents…we can turn this threat into an opportunity to revitalize the U.S. energy sector and boost growth economy-wide,” Biden’s plans state. “We can create new industries that reinvigorate our manufacturing and create high-quality, middle-class jobs…”

The effects of the pandemic are not a result of some random natural disaster, but a direct result of environmental exploitation. Many believe the situation we’re in is an inevitable result of our globalized, economically interdependent world.

In some ways, the pandemic is a warning sign of what it looks like when the economy is prioritized over science.

According to scientists, those living in areas with high levels of air pollution are more likely to die from COVID-19. Deforestation or destruction of wildlife habitats and large, commercial livestock farms increase the likelihood that animals would exchange pathogens with each other and humans they may come into contact with. Additionally, global travel and shipping allows us to spread disease quickly and widely.

Denying the reality of the pandemic is truly a denial of the environmental consequences of living the way we do, and the pandemic’s resulting loss of life is directly related to a prioritization of economy and business over scientific advice. But what is perhaps most concerning about pandemic denial, especially among our leaders, is its potential consequences.

If some — our president, in particular — can so easily shrug off  200,000 deaths in roughly seven months as no big deal, as necessary to keep the economy open, what does that mean for a future of potentially catastrophic environmental damage?

Recent protests, initially a response to rampant police brutality and state violence against Black Americans, have highlighted the interconnectivity of these campaign issues. Many Black Lives Matter activists seek to bring awareness to an often-overlooked aspect of racial and climate justice: environmental racism.

Black Americans are disproportionately impacted by air pollution; communities of color in the northeast and Mid-Atlantic regions of the U.S. breathe 66 percent more vehicle pollution than white Americans, a study by the Union of Concerned Scientists found. Surveys by the National Institutes of Health have found asthma and lead poisoning rates are higher among Black children than white children in the U.S.. And the pandemic has disproportionality harmed Black Americans.

But environmental justice activists believe an economic recovery plan that aims to promote environmental sustainability and close racial income and wealth gaps will help to alleviate systemic unfairness in the U.S. made worse by the climate crisis.

In this way, the Biden campaign’s plans — which will create jobs, invest in clean energy and divert funding to Black and Latinx communities facing disproportionate levels of pollution — address the interconnectivity of the primary concerns surrounding this election, something that cannot be said of the current president.

Voting for Trump is a direct denial of climate change and its connection to key issues we all ought to be concerned with — the economy, the pandemic and racial injustice. Perhaps this is obvious to those thinking critically, but it should also be obvious to a self-proclaimed “great environmentalist.”