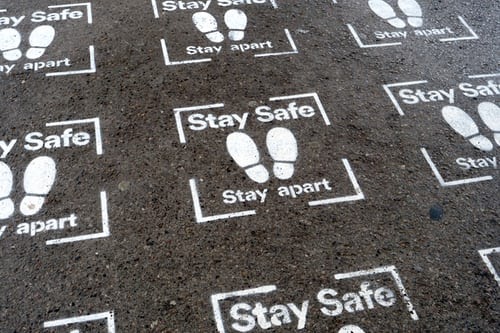 Though I returned to Butler just two short weeks ago, I do not foresee being able to stay much longer.

The secret frat parties. A new police dog wearing a Blue Lives Matter bandana. Classes being abruptly shifted online. Butler is not ready for operation in 2020.

Universities across the country are inviting students back to campus and are subsequently causing spikes in COVID-19 cases. As of this article’s publication, nearby Ball State University has a horrifying 59% positivity rate of the students who have been tested, which makes me nervous that Butler may stumble down that same path.

I made the risky decision to come back to campus because I knew my grades would suffer if I was learning from home. The second half of the spring 2020 semester was a nightmare for me. There was no separation between class, homework and personal time, which led me to a period of intense mental and emotional exhaustion.

I had hoped that this fall would be different. When the administration finally broke their silence over the summer, they implied that classes would be taught in person. I foolishly held out hope as I watched them put precedence on marketing instead of valid student concerns.

I suspected campus would shut down within a week or two of classes, given that university policy hinged on the hope that 20-year-olds would make selfless decisions. A plan like that did not prove to be as airtight as they had hoped. By Aug. 28, we quickly climbed to 53 confirmed cases.

This is not the only crisis the Butler community is currently facing.

In late June, BU4BlackLives, an organization consisting of anonymous Butler students and alumni, came forward about their concerns surrounding police brutality on campus. A few days later, they posted a list of demands for Butler to meet so that the school can pursue an anti-racist culture.

Though many students have made it clear they believe that Butler should consider meeting these demands, the administration has not met any at the time of this publication. The school wants to take matters into their own hands, but as the past has shown, it’s clearly not aggressive enough.

While the administration delayed meeting student demands, the Butler University Police Department decided to post this photo of Bear, the bomb-sniffing dog — in a Blue Lives Matter bandana. BUPD should be utterly ashamed of themselves for ever thinking this was appropriate to post — especially now. If that tweet alone is not enough to show that there is serious opposition to the Black Lives Matter movement and racial justice in general at Butler, then I honestly do not know what is.

Emma Lutes, a senior health sciences major, expressed her frustration with the handling of student demands from BUPD.

“With everything that’s happening with Black Lives Matter, [Butler] will post about how they care about it and they’ll hold discussions and everything but then we’re like, ‘Can you release the budget for BUPD?’ and they say, ‘No. We won’t do that. We won’t hold our officers accountable.’”

I am incredibly disappointed. As much as I want to be civil and patient, I simply can’t. Butler deserves minimal leniency right now. They have been given plenty of time to address student concerns and create a plan to keep students safe, and they failed miserably.

If Butler wants to continue engaging in the practice of peacocking, they need to go back to their abolitionist roots and start over.

Considering the situation surrounding BUPD, this school does not earn the right to present itself as some socially-just utopia to prospective students. It is point-blank misleading and harmful. They need to do better.

Louise Irpino, a junior English and creative writing double major, also wants to remind students not to be afraid to speak out.

“It’s kind of a badge of honor that we get to go here,” Irpino said. “You pay so much money and you don’t want to tarnish [Butler’s] reputation. Everyone wants to be proud of the school they want to go to, but I also think it’s okay to be critical of it.”

To be clear, the issues do not begin and end with the university. At risk of parroting the university’s patronizing messaging, the premise of the Community of Care is one we should be putting stock into, especially during a pandemic.

Students who have not been compliant with the Student Commitment for Personal and Community Wellbeing should absolutely be held accountable. The university might not have a plan to manage us, but it doesn’t take a genius to recognize that parties during a pandemic are nothing but a public health menace.

All cynicism aside, I truly hope that Butler commits to the wellbeing of all students. I do not want to feel the way I do about this school right now, but it is hard to be proud when it feels like profit is prioritized over your health and safety.

Change won’t come easily, and this fight is going to require everyone’s participation, no matter who you are or what you look like. Everyone deserves to feel safe on this campus, whether we’re facing a global pandemic or living through the civil rights movement of our generation.

Now is the time for Butler to truly embody The Butler Way. A good reputation should not come at the cost of student wellbeing.