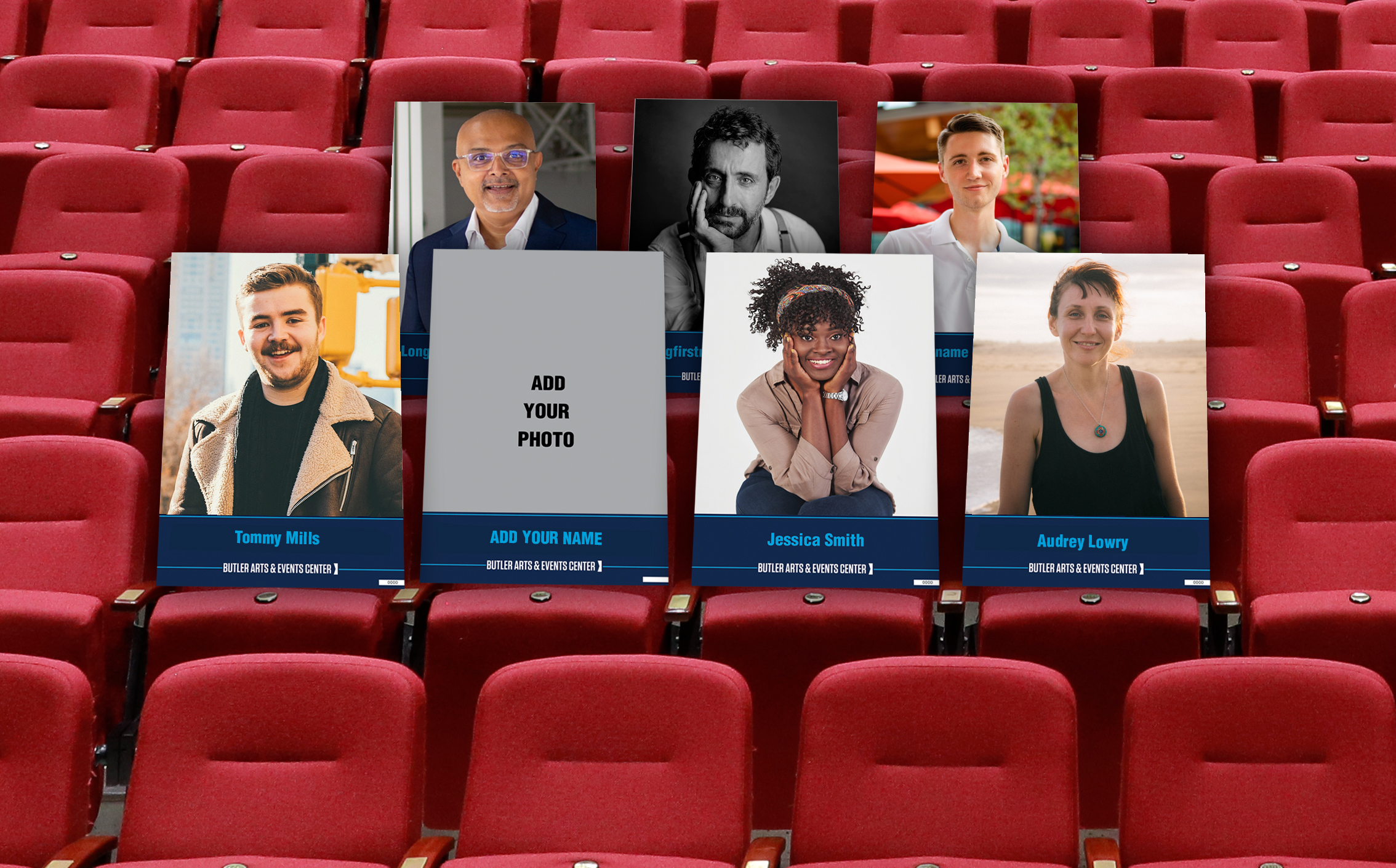 Support the arts with a giant-sized self-portrait. Photo courtesy of Butler Arts and Events Center.

In the midst of the COVID-19 pandemic, the entire Butler community has been adapting to a constantly evolving environment in various ways. Every organization at Butler has faced its own series of challenges, but few have been affected more than arts majors and the Butler University Arts & Events Center.

These groups have been forced to coordinate and deliver performances under strange and unfamiliar circumstances. One of the most prominent ways these performances have been affected is the absence of an audience. Recently, The Arts & Events Center has come up with a clever solution to this problem: Faux Fans.

Faux Fans, or “Faux Fans In the Stands,” is a new program that allows friends and family of Butler arts students to support performances by purchasing a 16 x 24 picture of themselves for $50. This picture will be placed in the audience at either Schrott Center for the Arts or Eidson-Duckwall Recital Hall, depending on where the performance is held. Each performance will be live-streamed, giving buyers the chance to catch a glimpse of their picture in the audience.

An important question raised is how Faux Fans will affect performers. Will it assist them during a show, serve as a strange distraction or simply not affect them at all? Kelly Schwantes, a theatre major with a minor in entrepreneurship and innovation, has provided some insight into the situation concerning music and dance performances.

“I don’t think it would affect anyone too much because they are going in with the impression of ‘my friends and family can’t be here anyways’, so it might be a nice surprise if you happen to look out into the audience and see a ‘face’ that you know,” Schwantes said.

Nole Beran, a sophomore theatre arts major, had a similar opinion on the two-dimensional audience staring back at performers. He related it to the virtual fans seen in sports games.

“I kind of compare it to what they’re doing in Major League Baseball… with the fake fans… it’s the same kind of thing. You need that crowd there to help you perform better.” Beran said.

Beran said he feels that even though physical cardboard cutouts of people are populating the audience, there isn’t a way to embody the emotions that the audience would normally produce.

“I can sit in front of a camera or an empty audience and give a monologue or something, but having that energy and that crowd either laughing, crying or showing emotion is what kind of drives us as performers,” Beran said. “So I think, while yes, it’s a good gesture to have cardboard cutouts to see someone there… hearing the audience is where a lot of the energy comes from.”

The Beethoven at Butler Series has already implemented the Faux Fans program into their live-streams. In reference to the series, Hurt said the following:

“We’ve actually added a clap track and it helps the musicians with the whole flow [of the] show,” Hurt said. “[It] brings [performances] back to normal as much as we can.”

Hurt continued to relate the situation to how both performers and audiences tend to be very receptive to emotional responses during a live performance.

“When you’re watching something on video, it just ends and you’re like ‘what’s going on?’” Hurt said. “Culturally, we already have that mindset to where we need to hear those triggers to make us know that we’re moving onto the next thing.”

Sattler also brought up a point about how portable the Faux Fans pictures are and how they can be changed around to fit their environment.

“The whole beauty of these is how we can move them. If something comes up last minute, they’re boards and they can easily be moved,” Sattler said.

Though the personalized cardboard cutouts are still in their beginning stages, they look to be a promising opportunity for those who care about Butler’s arts majors to provide at least a glimpse of the previous reality found in performing live on stage. Sattler hinted at the possibility of important Butler figures being viewable in the audiences during performances, a la “Where’s Waldo.”

“I will say, we will have some familiar faces that everybody will be able to recognize. Jim Danko and Lisa Brooks, and of course Blue are going to be in the audience,” Sattler said.

Will viewers see Faux Fans as a cheesy marketing ploy or a resourceful option for arts fanatics? Only time will tell. Faux Fans are available for purchase at butlerartscenter.org.