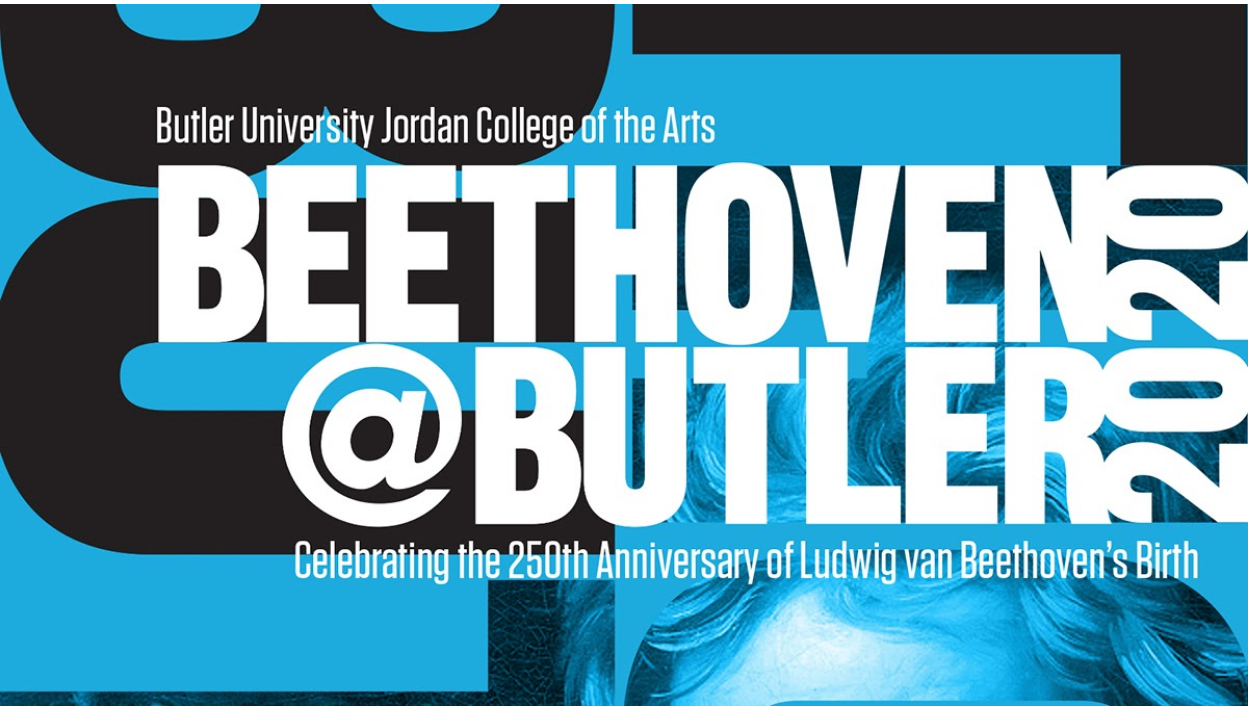 Looking for a party to attend without breaking social distancing rules?  Look no further! Join pianists from across the Midwest celebrating Beethoven’s 250th birthday with a nine-part live-streamed series. Beethoven at Butler will feature collegiate faculty and graduate students performing all 32 of the composer’s piano sonatas.

With the remaining programs scheduled for the next six Sundays, grab a computer and some birthday cake and join in the global festivities!

Kate Boyd, professor of piano at Butler University and Beethoven at Butler series coordinator, said that she and Lisa Brooks, dean of Jordan College of the Arts, started this series to showcase Midwest musicians.

Boyd performed the sonata No. 15 on the Sept. 27 program and will be performing sonata No. 27 on the Oct. 4 recital. Boyd’s past performance and the other previous Beethoven at Butler programs can currently be found on the Butler Arts and Events center, under “Streams You Missed.” Later in the season, they will be moved to the archive, where they will be available along with streams from past seasons for a $5 subscription cost.

DJ Smith, a solo pianist and Coordinator of Keyboard Skills at Butler, joined colleagues and “powerhouse female pianists” Kate Boyd and May Phang on last week’s program, playing the sonata No. 12: “Funeral March”. Smith remarks on how this sonata has been one of the most influential pieces by Beethoven in his career, citing the sonata No. 13: “Sonata quasi una Fantasia” and sonata No. 14: “Moonlight” as the two other works.

“[Sonata No. 12] is not quintessential Beethoven,” Smith said. “It’s not major third down, minor third down, you know, and very rough, and almost angry, you know what I mean? It’s beautiful. It’s lyrical. It’s romantic in style — but yet it has those little Beethoven surprises. It’s one that I’ve kept in my repertoire for that reason, you know, I played the Moonlight Sonata, too. I love both of them.”

Sophomore psychology major Marissa Ward shares Smith’s love for the “Moonlight Sonata,” which will be performed on the Oct. 18 program. Though Ward is not a musician, she finds it helpful to refer to the program notes when she listens to performances, such as the Beethoven series. She describes how the information found in these notes help her to better connect with the music. Viewers can typically find a download of these notes on the page below the livestream, or by following the link provided for each performance on the Beethoven at Butler series webpage.

“[The notes are] a combination of a little bit of history about the composer, why the director chose that [piece] and it makes it a little more personable,” Ward said. “It makes you really feel, at least it makes me really feel like I know what I’m listening to. And I know why it’s important and a sense of passion; I find that in the notes.”

The context provided by these notes can be helpful to the performers as well. Douglas Perez, a third-year student in the master’s program for piano performance and pedagogy, loves the story behind sonata No. 19, the piece he will play on the Oct. 4 program.

“He wrote [Sonata Nos. 19 and 20] as teaching pieces,” Perez said. “Initially, he didn’t want them to be published. There is a story about how his brother Carl went behind his back and then took them to the publisher. And because they were so marketable, because they were easy teaching pieces, they were accessible for the everyday pianist. And so [the sonatas] would sell more. So, they think that’s why Carl went behind Ludwig’s back and took those two to a publisher and published them.”

Knowing this story allows Perez to make stylistic choices that coincide more with the period in which the piece was written versus when it was published. As this series is live-streamed from the Eidson-Duckwall Recital Hall, Perez also said that performing without a live audience has affected his mindset going into the Oct. 4 program.

“Who knows who’s watching and who knows what people are going through especially with all the things that are going on right now,” Perez said. “So it’s my responsibility to — as best I can — share with an audience, because there are people out there who really need something for their heart and for their soul, and maybe it could be a little Beethoven.”

Both Smith and Boyd share similar sentiments to Perez, and said that they are especially honored to be a part of such a large celebration. Boyd also remarked on how incredible it is to be celebrating the 250th birthday of Beethoven with live music.

“When the pandemic happened, there was some concern: Would we not be able to bring people to campus, would we have to cancel it or something like that?” Boyd said. “And so, I’m very grateful that we are able to have live performances, even if they are streamed. Now we’re able to commemorate Beethoven’s 250th birthday during a time when I think music is more important than ever, because music is something that brings us together. It’s a shared experience we can have. ”

Furthermore, Smith shares how Beethoven’s struggle is one thing that makes his music relevant and worth celebrating today.

“I think that Beethoven really struggled with his compositions because he [was] hearing things that [couldn’t] be produced on the instruments of his time,” Smith said. “That whole idea of struggle, I mean, my gosh, 2020 has been a struggle. I guess it’s fitting that on this celebration of his birth, we’re kind of struggling with a lot.”

As the Beethoven celebration continues, the remaining programs will be live-streamed every Sunday at 7:00 pm and can be found on the Butler Arts and Events website. Boyd encourages all students and members of the Butler community to join, especially since several of Beethoven’s “cornerstone pieces” have yet to be performed on this series.