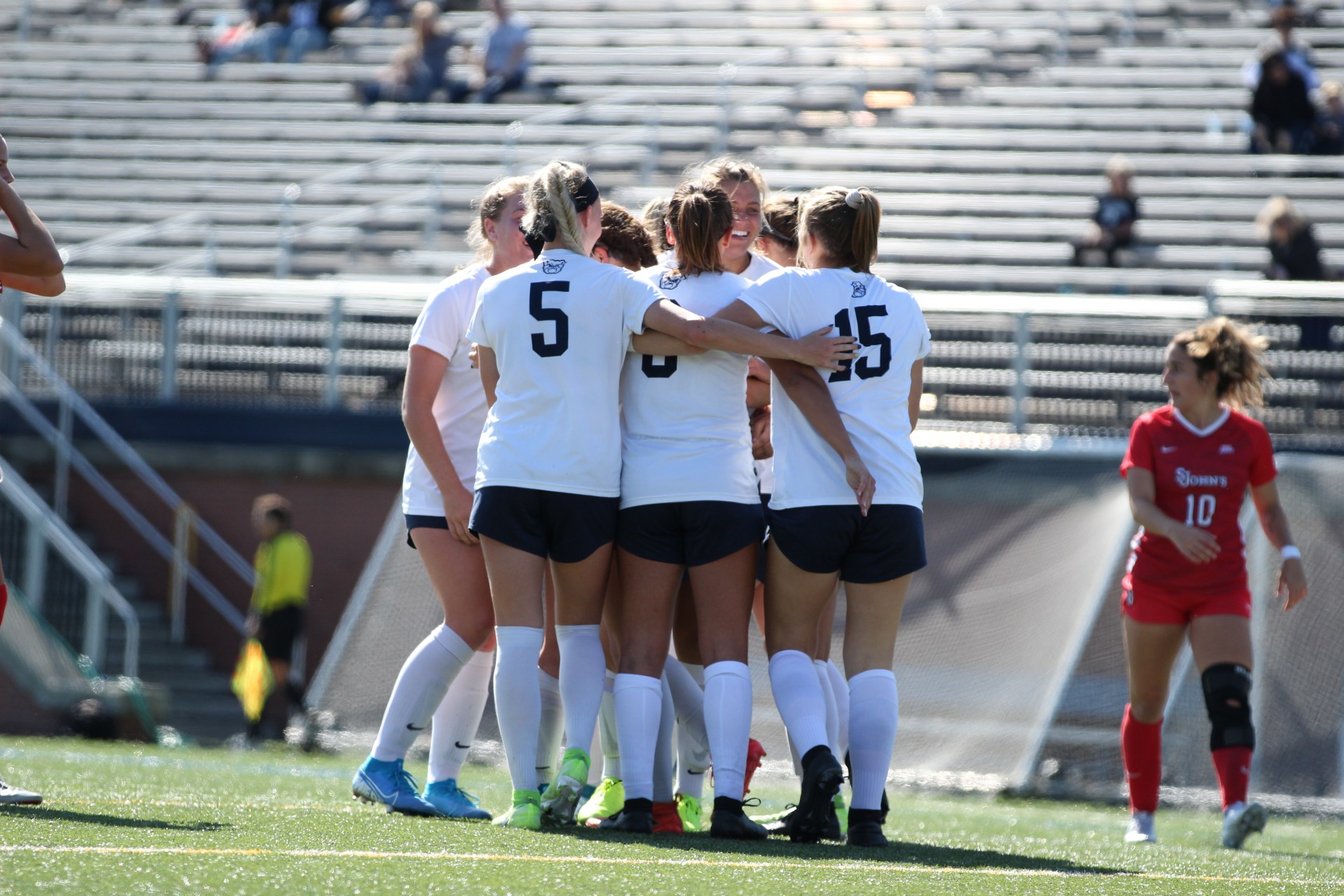 The Butler women’s soccer team celebrates a goal during a game last season. The team has been forced to practice in non-traditional ways this year due to COVID-19. Collegian file photo.

Butler’s fall semester began with disheartening news — the first two weeks of classes would take place virtually. This left students confined to their screens and dorms, and it left athletes unable to practice or access workout facilities.

The Butler women’s soccer team may have lost their season, but that hasn’t stopped them from working towards their future goals.

For first-year midfielder/forward Alli Leonard, the two weeks offered up some time to adjust to college life, however atypical it may be this year. Leonard admitted that the transition was tough, but used the extra time to get closer with her teammates, some of whom are also her roommates, and work on certain aspects of her game.

“The whole team in general was very inclusive,” Leonard said. “Although we couldn’t get together or anything, they were always reaching out, texting us, letting us know certain workouts we could do or even places we could go eat with our own class.”

Sophomore midfielder Becky Dean added that the coaches did a good job of keeping the team close with Zoom meetings during the two week period where they were unable to group together.

“We did some film sessions over quarantine,” Dean said. “In that two week period they made sure to keep us updated on the athletic department and what they had to say about going back to sports.”

Junior midfielder Morgan Kloosterman said she believes that teamwork is just as important off the field as it is on the field. Even when classes returned to in-person and campus facilities began opening up, social distancing has still made this aspect of team building a bit tricky.

“It’s kind of hard to create the team dynamic where we could go hang out with kids in other grades and kids that didn’t live with us, but we are trying to do as much of that as we can on the field and kind of build that team comradery,” Kloosterman said.

As the shock of losing both their fall season and valuable practice time subsides, the team is regrouping for the possibility of a spring season. The practice schedule closely resembles one of their normal fall seasons, but the players know not to take in-person practices and workouts for granted.

Dean said that practices are a good distraction from the thought of losing their season.

The team’s expectations are high as they look into the future and the past. Last season’s loss in the first round of the Big East tournament combined with a huge desire to get out and play after a cancelled fall season has created a buzz of excitement about this season.

“We had a lot of big expectations coming into this season,” Dean said. “I think those are even bigger because it’s been pushed back. I think that we’re going to be a team to look out for next season.”

Though the stakes are high the team’s goals remain the same. Regardless of the expectations or the obstacles put in their path, Kloosterman said they hope to come together as a team and play to the best of their ability.

In order to achieve their goals, the team finds motivation within themselves and within their teammates, even when it may be difficult. Leonard, Kloosterman and Dean all agreed that this mutual support pushes them to be their best for their team and the future of the program.

“It’s pretty hard,” Dean said. “It seems like there is so much going against us, but in the end I just like to look towards the future and towards what’s to come. For the recruits who are looking at Butler, it keeps me motivated to keep the programs expectations high.”

When looking at the events of the past few months, Dean says she now understands not to take anything for granted.

“Something as little as going and playing a game against IUPUI on the bowl, it can seem little in the moment, but when it is taken away from you, you really miss it and you would give everything to do it again,” Dean said. “Cherish every moment that you have on the field with your teammates.”

Leonard illustrated a similarly positive mindset. She believes these odd times can be used to grow both as a team and as an individual.

“I feel that these opportunities give us a way to grow,” Leonard said. “You can look at this from one perspective where it’s just horrible and you’re missing out on so many things but at the same time it gives you opportunities to learn something new and grow together as a team.”