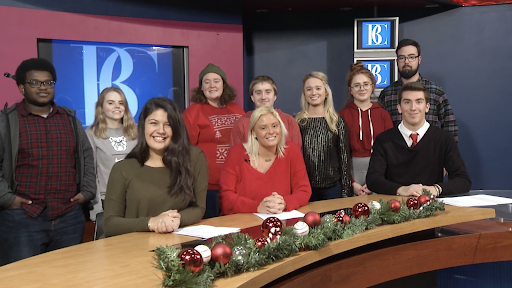 There was a point in my time at Butler where I was in jeopardy of dropping out of school, becoming just another tally in the 30% of college students who drop out after one year.

Years later, that lost scholar has nearly faded from memory. It doesn’t completely disappear. I hold on to a part of that memory as a reminder to keep pushing and striving to be better.

That once-struggling student has since changed his major to sports media and completed three internships: one with Vans, another with a minor league baseball team and the last with WISH-TV in Indianapolis.

He’s a member of the dean’s student advisory board in the College of Communications and has given tours and demonstrations of the Fairbanks TV studio to prospective students.

He’s had the chance to report inside the basketball cathedral that is Hinkle Fieldhouse and interview some phenomenal people.

I have no doubt in my mind that joining The Butler Collegian was a pivotal contributor to making so much of that possible. It’s given me continuous opportunities to learn and grow, while making lasting friendships that will stand the test of time, just as the stories we share do.

But my Collegian story isn’t like most. Many in the 134 years of this newspaper’s existence began by writing about campus news or sports, sharing their opinions or exploring Butler’s culture. Their work is printed and then distributed in academic halls and other corners of the university.

My work was done in front of a lens.

Fall of 2018, the inaugural year of The Collegian’s multimedia section, laid the foundation for what the future of this paper could be as it expands and explores new avenues of content and production. A small bundle of only five staff members created what has become known as the Butler Collegian newscast.

Since then, the section has more than doubled with a group of lively, ambitious and talented students who make the experience so special.

Those who help behind the scenes simply do not get enough credit for all they do. Whether it is moving cameras, changing set arrangements or making adjustments for audio, they make it all come together. Some even fill in as an anchor or reporter if needed. Each comes in with an attitude that’s encouraging and uplifting. The manner in which they communicate and interact with the staff makes them the heart and soul of a production.

The on-camera personnel will no doubt find their futures in broadcast. Their approach to storytelling is unique and builds an emotional tie that is sometimes best demonstrated on screen. They exhibit great talent and craftwork in writing and delivering stories.

My goal as the multimedia editor was to build from last year and bring the staff together. Few of the multimedia staff members had actually met each other in person prior to joining The Butler Collegian, but now connect as though they’ve been working as a team for years.

I can’t thank our digital managing editor Josh Doering enough for the countless hours he put into helping the Newscast. The support I’ve received from our managing editor Meghan Stratton has been tremendous week in and out. Our editor-in-chief Jessica Lee had the confidence in me to take on this role and contributed immensely to developing the vision for the section.

Additionally, tremendous credit goes to the section writers and their editors who take time out of their everyday lives to report on the stories our community needs to hear. The stories they investigate enable us to take their written content and transform it to video. Without them, the newscast would not be possible.

In my journalistic pursuits, my objective is to inform and entertain. I’ve found my goal in life is to bring people together.

The highlight of my week was each Monday and Tuesday evening after classes were done. Whether I walked into The Collegian office or the TV studio, I knew I’d be in a place with people who wanted to be together. I knew I could contribute to that closeness. Whether it be quotes on the office wall or antics off camera, there’s moments from this experience I won’t soon forget.

I’m confident heading into graduation that I’ve answered that question — who do you want to be? The answer is quite simple.