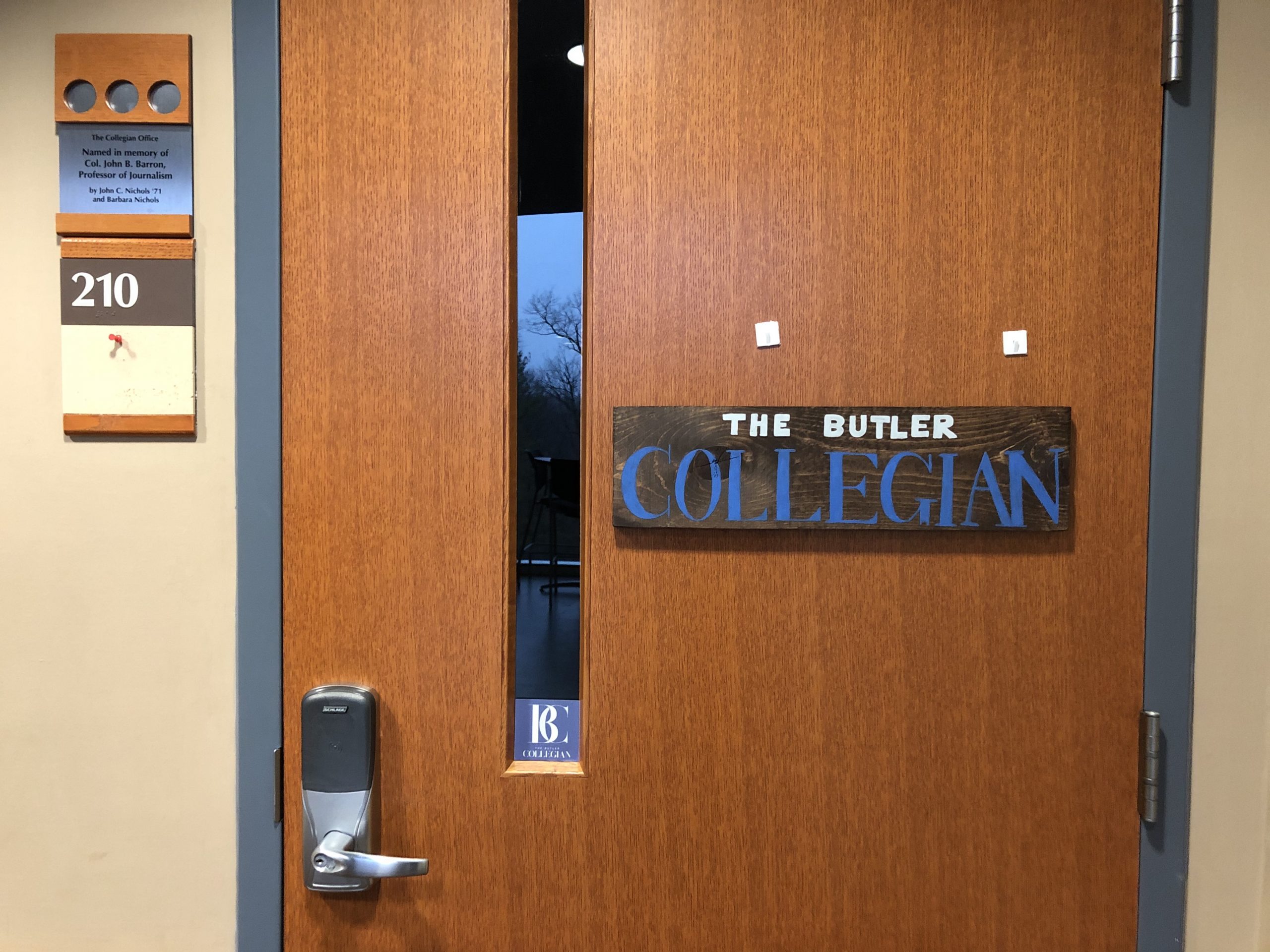 The room where it happens. Photo by Jessica Lee.

It was just supposed to be a room like any other on Butler’s campus, really. It had a purpose like all the others. But what made Fairbanks room 210 different is the fact that it is the Collegian office: the newsroom, the meeting place and, oftentimes, the war room.

For a long time, that’s what room 210 was supposed to be and that’s what it was. It was just the place I went to work, and I didn’t think much more about it. It has a collection of computers, a corner for each section of the paper and, of course, a food table.

But boy, oh, boy, is it something way more.

Room 210 is the place that I have grown the most over my four years at Butler University. From a professional standpoint, I’ve grown leaps and bounds as a writer. Every time I look through some of the articles I wrote in my early Collegian years, I get a nice chuckle, because they aren’t very good. Now, I have stories that I bring up whenever I get the chance because I’m that proud of them.

Because of room 210, I feel like I can take on the journalism world after I leave Butler — whenever I enter the industry and whatever that might entail.

Room 210 ultimately gave me the opportunity to live out a dream of covering the Butler men’s basketball team and working in Hinkle Fieldhouse on a regular basis, which is just an incredible thing to think about. It’s the foundation of every internship I’ve gotten over the last four years, too, because The Collegian was the first thing I got to put on my resumé.

I have covered the golf, football, soccer and basketball teams during my time at The Collegian. I’ve covered topics as varied as Andrew Luck, California state legislation and Hinkle Fieldhouse emcees. All the highs and lows of my writing career were with The Collegian — from the Society of Professional Journalists awards to the piece about sports psychologists that I’d rather forget about, it’s all part of my story. I would be remiss if I didn’t acknowledge and thank The Collegian readers who gave me a platform to write about those things. So, thank you.

I’ll always be thankful for the experience, the writing and the growth, but it will never stack up to the people I’ve met along the way.

From my first sports editors — Zach Horrall and Marisa Miller — who challenged me and gave me stories that allowed me to grow as a writer, even though I’m convinced they were just psyched they had someone who actually wanted to be the golf beat writer. To Dana Lee, who I swear makes you a better writer just by reading her work, but was also the most ruthless editor I’ve ever had.

I found out who my best friends are in room 210. Josh Doering, the kid from Canton, Michigan who knows everything under the sun about sports. He’s my best friend, my podcast co-host and the most genuine person I have ever met. Chris Brown — yes, that’s his name — was the perfect co-sports editor and friend. He kept me grounded even when a source wouldn’t respond to yet another email. Meghan Stratton is — hm, hm — the one I didn’t expect to be so close to. A year ago I didn’t know anything about her, but now she’s one of the people I talk to about everything.

And then there’s the editor-in-chief, Jessica Lee. I’ll keep this short, because I was told I only have about 700 words to bid my farewell, but for what it’s worth I could write a lot more than 700 words about her. I am forever in debt to her in more ways than one. She gave me a chance to be a sports editor, which I wanted so badly, and without that position this year wouldn’t have been so special.

Jess has become the person I go to on my worst days, on my best days and all the other ones in between, and it’s because of her that I know I’m never alone.

Those are just a couple of the people I’ve met in room 210 that have made me the person I am today. I love them deeply, more than words can describe. I love The Collegian, too, more than I ever thought I would. It’s the best decision I made at Butler.

I might not have always been resting in Fairbanks room 210. In fact, it was usually the opposite. But one thing is for sure: Fairbanks 210 is my home, and I was never alone.