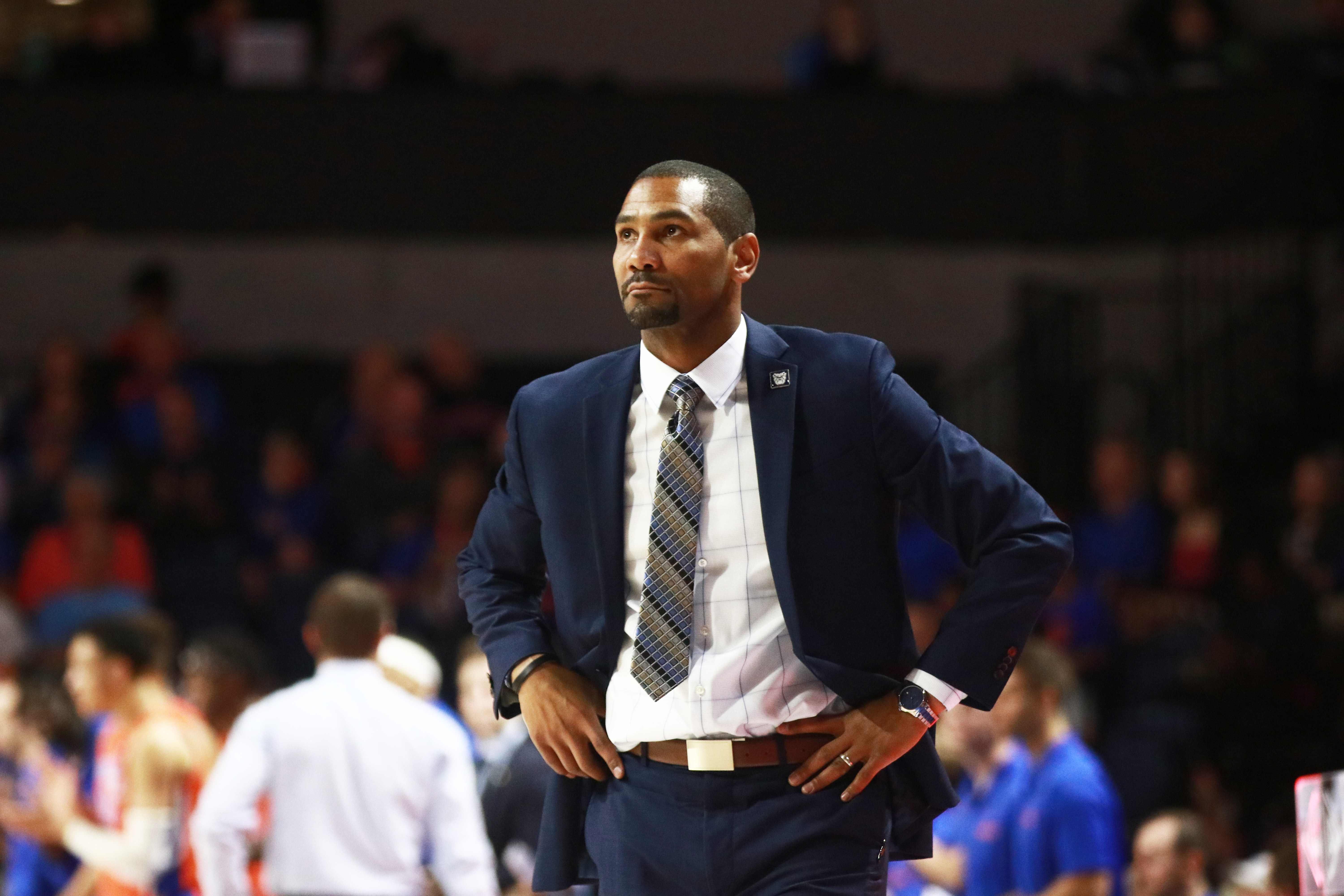 Everything has an answer.

In many cases, there is a particular answer with a particular problem. A math problem, for example, has one answer. Two plus two equals four. Call a tow truck if your car dies. Revisit an offensive strategy after a bad loss. Oftentimes the answer is clear and there is only one of them.

But some things come that don’t have a clear answer. There isn’t necessarily a right answer, or a wrong one for that matter. The answer is up for interpretation and it varies from person to person.

It’s not hard to imagine what these things are. Tragic loss, maybe losing a job or one of a million other instances that are seemingly unfair and have no logical answer to why they had to happen — kind of like a global pandemic that is upending the lives of everyone in the world.

Everyone is looking for answers nowadays. Answers that provide comfort and sanity. For Butler men’s basketball head coach LaVall Jordan, he turns to his faith to find those answers.

“Where do you find your answers?” Jordan said. “And I look to my faith to find the answers for the things that humanity brings to us and the things we go through each and every day. I think that’s where I lean and trust and find the answers.”

The Butler men’s basketball team is looking for answers, too. A season that has so much to be proud of, stripped away before the Big East Tournament or the NCAA Tournament could take place. Every season comes to an end, but very few end without complete closure.

This one ended with seniors playing in a game that they didn’t know was their last at the time. It ended with three straight wins, including one against a rival on the road on their senior night.

Wake up and the entire postseason is ready and waiting. Then it was gone.

“You don’t have true closure,” Jordan said. “You do have the finality of it, but in terms of your emotional well-being, you don’t have the opportunity to get beat or lose and say that you gave it your all. You didn’t have that, that’s the difference…It’s a completely different conversation when there is no opportunity.”

Jordan’s faith plays an important role in how he approaches coaching a college basketball team. It impacts his decision making on an everyday basis, but also during the coronavirus pandemic. Jordan and his coaching staff held a meeting for everyone around the Butler program in New York after news of the season ending broke. Not just players — players, families and friends.

The joy and smiles of a conference tournament at Madison Square Garden was replaced with sadness and tears.

“Just allowing those guys to feel and just reaffirming that it’s OK to have whatever feelings you have,” Jordan said. “Frustration, disappointment, whatever you are feeling is OK. Just being open and honest, we’d had conversations all year, just open and honest conversations about a number of different things.”

Those open and honest conversations were most important during that time of uncertainty. As a man that his players, specifically senior forward Sean McDermott, described as one who walks his life with Christ, Jordan called on Christ in a challenging moment and leaned on him to offer those answers for himself and his players.

“He invited us all in after we found out the news and just prayed over everybody,” McDermott said. “Family, friends, whoever wanted to come. And I thought for me that was really special that he would do that in such a challenging moment.”

Ephesians 4:11-16 is the cornerstone of Jordan’s coaching philosophy and he uses it not only in times of crisis, but in the everyday operations of being a head coach. Motivation comes in many forms. Some coaches scream and shout and show videos of motivational speeches to lead teams, but Jordan finds his grounding and leadership in faith and scripture.

The beginning of the passage states, “Christ himself gave the apostles, the prophets, the evangelists, the pastors and teachers, to equip his people for works of service. So that the body of Christ may be built up until we all reach unity.”

Sound familiar? A body of unity is something Jordan preaches throughout every season, growing as a team and building a family that improves day to day. The last verse states, “From him the whole body, joined and held together by every supporting ligament, grows and builds itself up in love, as each part does its work.”

Jordan is trying to teach unity and buying into an operation and family bigger than any individual, and his motivation doesn’t come from YouTube.

“I think that’s unique for a coach,” McDermott said. “Especially in a competitive sport like basketball. And then I think it played a huge role at the end of the season when all this happened. There’s just like the realization that this is a game. There’s a lot bigger things in life than the orange ball that we try to shoot in the hoop.”

That’s how Jordan approaches his basketball team, by equipping them to do the work and to be a part of something bigger than themselves. Butler is a developmental program. For Jordan, that doesn’t just mean on the basketball court, but as the young men that come through the program who are figuring out who they are and what choices they want to make.

In basketball, the goal is to get better everyday, little by little, chasing the point at which you want to be even though you may never get there. Even though Jordan isn’t quite where he wants to be with his faith, he’s trying to grow everyday in his relationship with God.

“You’re never where you want to be,” Jordan said. “But thank God I’m not where I used to be. You’re constantly seeking growth and trying to be better than you were yesterday. It’s something that has grown and continues to grow.”

Being a Christian, as Jordan said, doesn’t mean you aren’t human.

“You deal with the humanity of everything that we all deal with,” Jordan said. “Temptation, failure, success, prosperity and all of the things we are going through everyday.”

Jordan wasn’t always fully committed to his faith. Like many, he grew up going to church. His grandmother sang in the choir, his grandfather was a deacon and a young LaVall was on the Sunday School bus every week.

Everyone makes a choice about what being a Christian means for them, personally. Jordan’s moment came during a time of uncertainty in March of 2010 — when he was let go from the University of Iowa basketball program.

“It was a surrendering and rededicating my life and completely following him,” Jordan said.

While losing a job and enduring a global pandemic are two completely different things, uncertainty comes with both. Jordan can’t control everything, but like on the basketball court, there are things to control.

Whether it’s on the basketball court leading his program of young players through a normal season or in the midst of a global pandemic, Jordan leans on his faith to find comfort in the questions and concerns of humanity.

Faith is where he finds his answers.