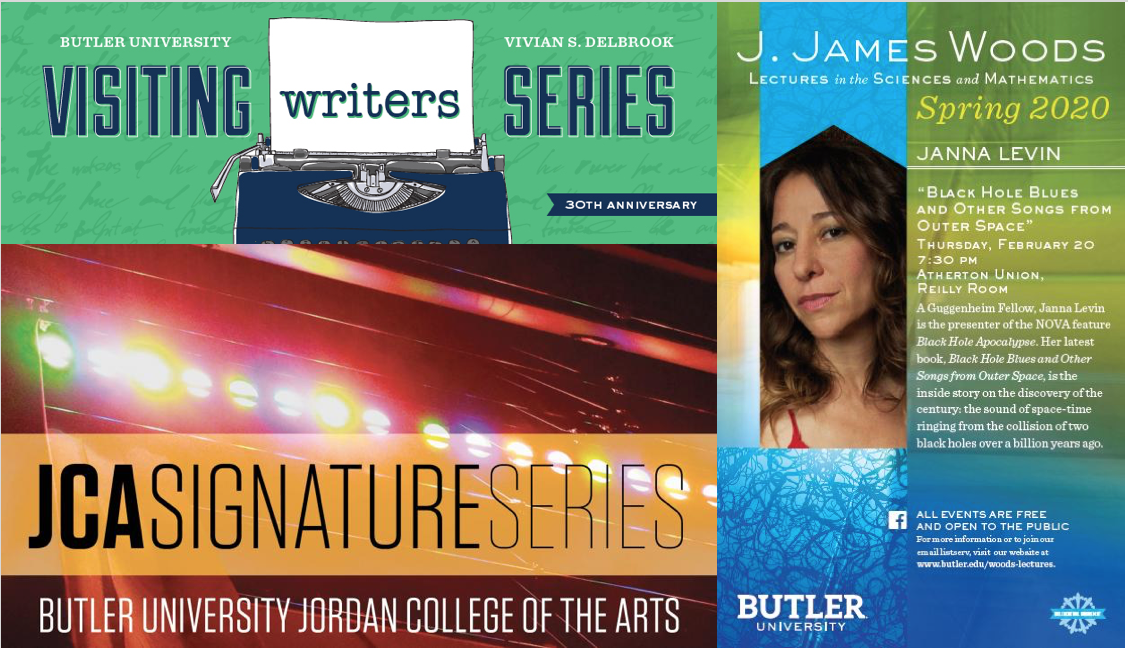 In an effort to limit the spread of the coronavirus, Butler closed campus and canceled all in-person events. Of course, these cancelations included various ongoing series hosted by different academic departments. These series events are often required for classes, serve as extra credit, count toward the coveted eight Butler Cultural Requirements and generally serve as a source of entertainment and connection for both the Butler and Indianapolis community.

In its 30th anniversary year, the Vivian S. Delbrook Visiting Writers Series prematurely ended its spring season after only two events. The remaining three VWS events, which included speakers Kate Bornstein, Ada Limón and Percival Everett, have been canceled. There is a possibility that these writers may come during a different year, but currently next year’s schedule has already been booked.

Chris Forhan, an associate English professor, does not think that the cancelations will impact the VWS in the future.

“The VWS has been going strong for several decades,” Forhan said. “It has a loyal following both on campus and in the community, and it has a solid source of funding, so the series should not be affected in the long run.”

Some classes required students to attend VWS events, however, many professors have either eliminated that requirement — similar to how the BCR has been waived for students graduating in the spring or summer — or have created a replacement requirement. Forhan suggested students check with their individual professors regarding the VWS requirement.

Natalie Shaffer, a first year English major, is in the Visiting Writers First Year Seminar. Her class is continuing on as if the series had not been canceled, with some slight changes regarding how they discuss the material. She, like many other members of the Butler community, said she is upset about the end of the semester.

“I made a lot of new friends at Butler and I was getting used to calling that place ‘home’ for the next four years,” Shaffer said. “I didn’t have a proper goodbye with my friends and professors. But I know this is all for my safety and I appreciate that Butler is taking the necessary precautions to try and alleviate this situation.”

The remaining three JCA Signature Series events, which included performances of theatre, music and dance, have been postponed and reworked into the next academic year’s schedule.

Lisa Brooks, the dean of Jordan College of the Arts, does not think the cancelations will impact the series in the future due to the global cancelation of concerts and performances. While the series will not be impacted, the students, faculty and staff that call JCA home have been.

“It’s been devastating,” Brooks said. “I don’t think there’s quite a similar scenario anywhere else on campus, and our students are almost going through a sense of mourning because this is what we do.”

Brooks discussed how the different majors have been suffering and coping with the new normal brought on by coronavirus. Butler ballet and music students are two schools she acknowledged that have been struggling the most with the cancelation of arts events.

“I sent an email to all the students yesterday, inviting them to respond to me and just to give you an idea, one of our dancers wrote to me, I’m quoting, ‘I am hurting so much, some days are more difficult than others… None of the final moments on stage, in class performances were cut short and there were no goodbyes.’ I know a lot of students are feeling that,” Brooks said. “I would say that our students feel a particular sense of loss that cannot be overstated enough, and I’m not really sure how to help them.”

Center for Faith and Vocation Series

The Center for Faith and Vocation hosts two series throughout the year: the Religion Seminar Series and A New View Film Series. The Religion Seminar Series hosted its last event the Tuesday before spring break, while A New View Film series canceled its last film event. Currently there is no plan to postpone or reschedule the film for the next academic year.

Daniel Meyers, director of the CFV, is currently planning events for the next academic year. Similar to this year, he plans on having four events for each series — two in the fall and two in the spring.

“The assumption we’re playing with is that by September we’ll be able to host these events, but that’s with the assumption and optimism that we have when we planned these events,” Meyers said. “We’ll plan for a normal fall, but if things need to change we need to be flexible in that way.”

The J. James Woods Lecture Series is devoted to the discussion of science and mathematics. In accordance with coronavirus precautions, the remaining two events were canceled, which included neuroscientist Greg Gage and professor Tanya Smith.

Ankur Gupta, associate professor of computer science and chair of the Woods Lecture Series, is currently attempting to reschedule the two speakers for the fall semester. He does not think the canceled speakers will have any impact on the program.

“Obviously we liked the people we invited so we’re trying to work that out,” Gupta said. “We have a pretty strong following both on and off campus and I think it’s pretty clear universally why we’re canceling the events.”

Updated information on postponed or rescheduled events can be found on Butler’s events page.