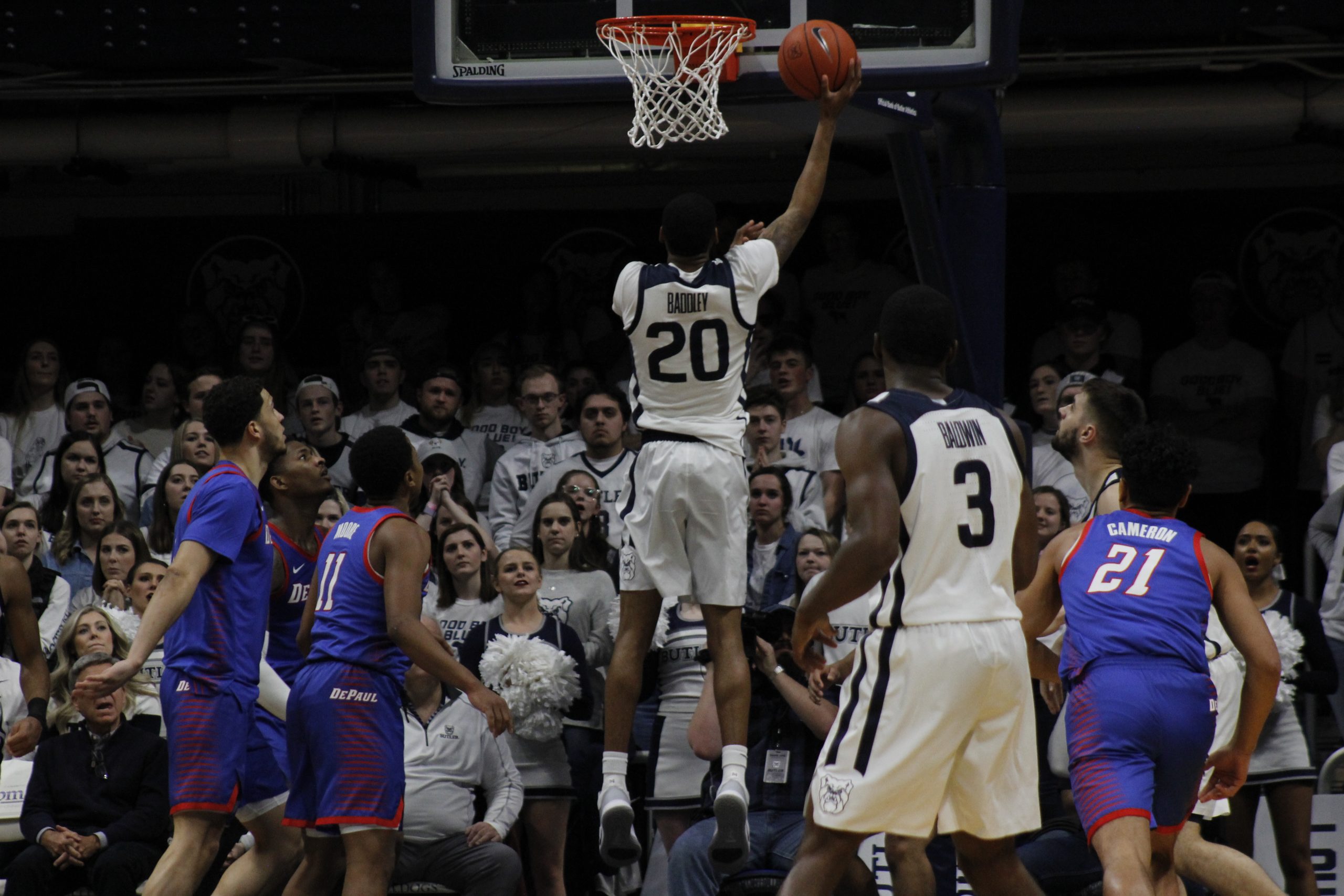 Henry Baddley goes up for a layup in a game against DePaul on Feb. 29. Baddley will be honored along with Baldwin, McDermott and Smits on senior night. Photo by Kelly Hallinan / Collegian file photo.

The Butler men’s basketball team will defend Hinkle Fieldhouse for the final time in the 2019-20 season on Wednesday against the St. John’s Red Storm.

The Red Storm sit near the bottom of the conference at 4-12 in conference play and 15-14 overall. However, the Johnnies are coming off of arguably their best win of the season, beating the Creighton Blue Jays 91-71.

Behind 33-of-60 from deep and 14-of-22 from the field, St. John’s won just their second game since the beginning of February. Four players scored in double figures and the Red Storm committed just seven turnovers in the blowout.

In the first matchup between Butler and St. John’s, the Bulldogs went on a 23-2 run in the first half, only to cough up the entire lead in the second half and need a 7-0 run at the end of the game to escape Carnesecca Arena with a win to open Big East play.

Here’s what Butler needs to do and what you need to know as they take on St. John’s on senior night for Kamar Baldwin, Sean McDermott, Henry Baddley and Derrik Smits.

How to watch/listen: CBS Sports Network, 1430 AM

St. John’s is not a great 3-point shooting team. They are currently eighth in conference play, shooting the deep ball at just a 32% clip as a team. They have an especially hard time scoring the basketball when they don’t shoot the three well. The Johnnies have shot better than 35% just twice in their last eight games — the only two games they won in that time span.

It is even more important for Butler to defend the perimeter because the Johnnies are one of the worst 2-point field goal teams in the Big East, shooting just 43% from inside the arc against Big East opponents. Furthermore, they don’t get to the free-throw line to compensate. St. John’s free throw rate — calculated by dividing free throw attempts by field goal attempts — is last in the Big East and when they do get to the free throw line they knock down free throws at just a 72% clip.

St. John’s has the ability to score north of 80 points when they shoot it well from beyond the arc. When they don’t, they struggle to surpass 65 points, especially in their last eight games.

There aren’t many things that St. John’s does better than most teams, but one of them is winning the turnover battle. Only two teams in the country have a better turnover margin than the Red Storm. In conference play, the Johnnies are first in both offensive turnover percentage — meaning they don’t turn it over often — and first in defensive turnover percentage — meaning they force more turnovers per defensive possession than any other team in the Big East. St. John’s turns it over on just 13% of their possessions while forcing a turnover on better than 20% of opponents’ offensive opportunities.

What makes the Red Storm defense so dangerous is they force a lot of live-ball turnovers. In other words, the turnovers St. John’s force don’t result in an inbounds play or some other stop in action. When the Johnnies force turnovers, they often result in fast break opportunities while the opponent is scrambling on defense. Averaging 10 steals per game, St. John’s is fourth in the country in that category.

In the first meeting between these two teams, live ball turnovers were almost the demise of Butler. After a remarkable first half, Kamar Baldwin was sidelined for a large portion of the second half due to an ankle injury and the Red Storm ran rampant on a Butler offense with only one true ball handler. They forced 16 turnovers in the second half — including 11 steals — resulting in 15 points off of turnovers. It’s no secret as to why the Johnnies clawed back into the game.

Fortunately for Butler, both Baldwin and Aaron Thompson are healthy right now and should be at LaVall Jordan’s disposal to handle the pressure of the St. John’s defense. However, another ankle tweak or foul trouble in the backcourt would leave Butler vulnerable to that pressure once again.

3. Controlling emotions will be important on a highly emotional night.

Senior night is always highly emotional, as it should be. Baldwin, McDermott and Baddley have been part of 82 wins in a Butler uniform, including two NCAA tournament appearances and three tournament wins. Baldwin, who currently has 1,908 career points at Butler, is just 31 points behind Matt Howard for fifth on the all-time Butler scoring list. Depending on how many games the Bulldogs play in the postseason, Baldwin could finish as high as the third leading scorer in Butler history. Sean McDermott has started every Butler game in the last two seasons and 14 more as a sophomore and Baddley has played in 115 games as a Bulldog.

The point is Hinkle Fieldhouse is saying goodbye to a group of highly impactful seniors. And they are saying goodbye to the Hinkle faithful. It’s easy to get caught up in the moment especially against a team like St. John’s, who Butler shouldn’t have a problem beating at home. But as mentioned previously, St. John’s will get hot if you let them and can capitalize on mistakes on defense like few other teams do.

The Bulldogs are in a three-way tie for fifth in the Big East. They could go 2-0 and finish in fifth and avoid playing on Wednesday of the Big East Tournament, or they could slip up and find themselves in the bottom four. This game carries weight and Butler will need to remain focused among the emotion of senior night.