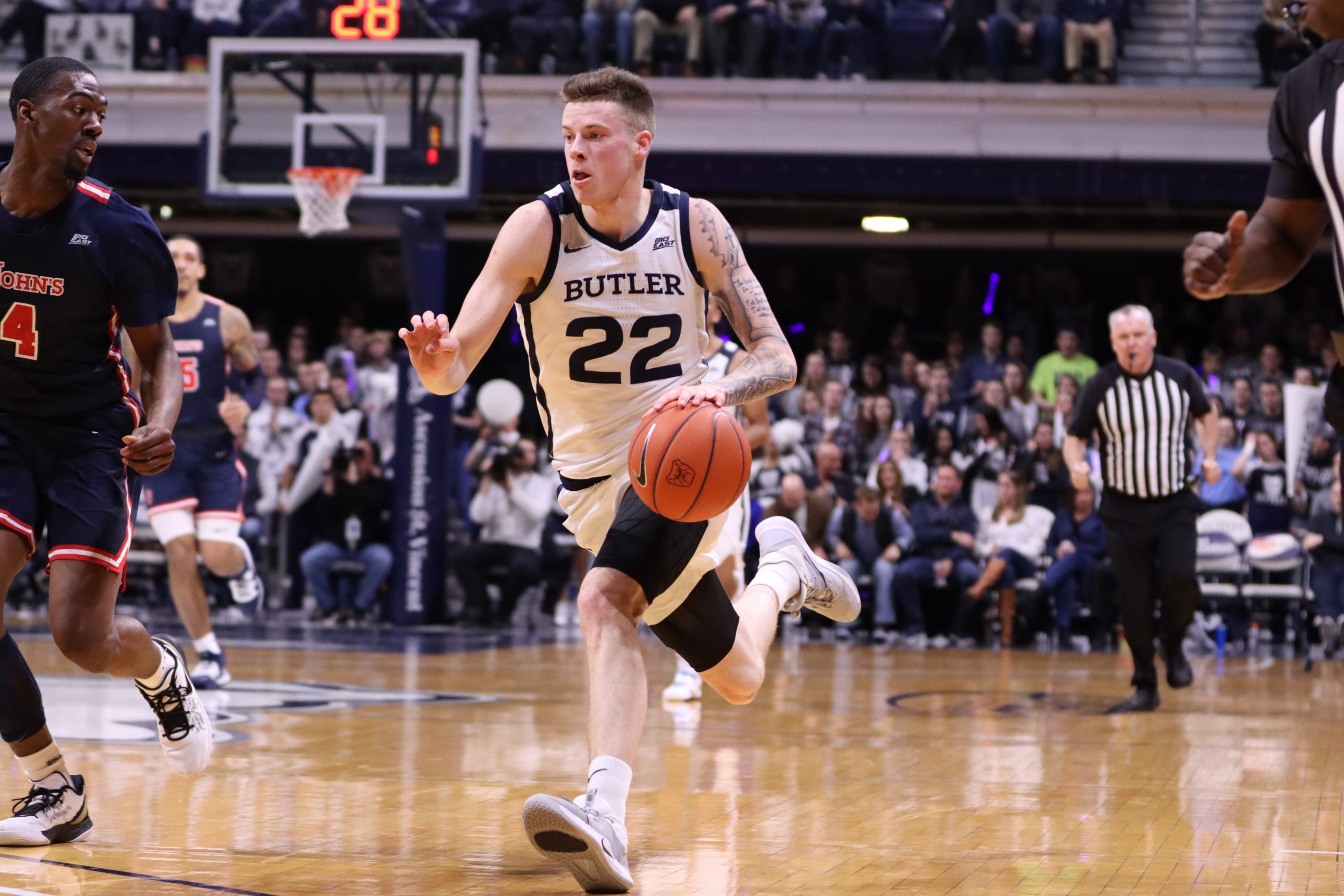 Sean McDermott dribbles down the court against St. John’s on senior night. The senior scored 16 points and 14 rebounds in his final game inside Hinkle. Photo by Chandler Hart.

The first half didn’t go perfectly for Butler. They only shot 42% from the field and let St. John’s forward Julian Champagnie score 16 points on 6-of-8 shooting. If it weren’t for an offensive rebound and putback from Sean McDermott in the closing seconds of the half, the Bulldogs would have been trailing by at least three, and possibly more, after 20 minutes.

Instead, they were down by just one and what followed in the second half was arguably Butler’s most complete 20 minutes on the offensive end this season. They doubled up the Johnnies 46-23 in the second frame and never looked back after opening up the second half on a 17-5 run.

McDermott led the Bulldogs with 16 points — more on him in a minute — and four other Bulldogs scored in double figures. The only other time Butler had five players score in double figures was in the home loss to Providence on Feb. 1. Butler got a complete offensive performance from all corners of the court and ultimately cruised to another senior night victory.

Let’s go beyond the box score as Hinkle says goodbye to some of the better players to ever put on a Butler uniform.

1. Butler was almost untouchable in the second half.

By the numbers, the second half was pretty spectacular — maybe the best all season. They outscored the Johnnies 46-23 in the second half. They were 17-of-30 from the field shooting 57% as well as 43% from beyond the arc. Nine of the 10 players who say the floor scored with the lone exception being John-Michael Mulloy. Three different players didn’t miss and the Bulldogs dished out 10 assists as a team.

They were equally impressive on the defensive end. The Red Storm shot just 31% — 9-of-29 — from the field. After Champagnie lit up the Bulldogs for 16 points in the first half, he had just seven points on 3-of-6 shooting in the second frame. Only four St. John’s players scored and nobody had more than nine points. They were outrebounded by five and dished out just three assists as a team. Butler was suffocating on the defensive end after halftime.

The second-half performance points to LaVall Jordan’s ability to adjust after halftime. The Bulldogs picked up the pace considerably in the second half. Jordan discussed speeding the Johnnies up after the game saying he wanted to spread them out more giving players like Kamar Baldwin and Aaron Thompson more room to maneuver in the lane. In the second half, it was clear that nobody on the St. John’s roster could stay in front of Thompson. The junior exploited that scoring six points in the second half, dishing out three assists and getting to the front of the rim regularly.

On the other end, one player was really burning Butler in the first half and they essentially shut him down after his quick start.

It’s always fitting when a senior has one of his best performances of the season, and his career, on senior night. McDermott scored 16 points and pulled down 14 rebounds including 10 in the first half. He was 6-of-11 from the field and shot 42% from beyond the arc. It was just his third double-double in a Butler uniform.

His stat line in-and-of-itself was impressive. But it’s also the epitome of what McDermott has become as a Butler player. Of course, he’s one of the more dangerous shooters in the country. As an aside, he became the third Butler player in program history to knock down 200 threes in his career. Pretty fitting that came on senior night.

But he also is the guy who does all of the little things right. He rebounds with alarming consistency for someone who is not that big in stature. He grabbed three offensive rebounds including the one at the end of the first half that really carried momentum into the break for the Bulldogs. He’s one of the best on the team when it comes to taking charges. He did that tonight, too. Not only was it a great performance from the redshirt senior on senior night, but he did it in very Sean McDermott fashion. Simply fitting.

3. Maybe the most important thing to come out of tonight, was the Big East tournament implications.

While Butler was beating St. John’s, Providence was beating Xavier meaning the Bulldogs secured a five or six seed in the Big East tournament. Even if the Bulldogs lose to Xavier in the final game of the season at the Cintas Center, it is impossible for Butler to finish worse than sixth in the conference. As a result, they won’t have to play on Wednesday in the first round of the Big East tournament. They get a bye to the quarterfinal round. The outcome of the Xavier game on Saturday will have implications as to which team Butler will play in that quarterfinal round, but now they have to win one less game in order to win the Big East tournament.

Senior night celebrations were spectacular and it was a fitting way to end McDermott, Baldwin, Baddley and Smits’ tenures inside Hinkle Fieldhouse. But like McDermott said, there is still a lot of work left to do and the events of tonight put the Bulldogs in a much better position in the conference tournament.

LaVall Jordan ventured a guess as to how he would define a Butler Bulldog. He said a Bulldog is thankful like Smits, a servant like Baddley, passionate like McDermott and humble like Baldwin. You’d be hard pressed to find a group of seniors that had a bigger impact on this Butler program.

And, of course, happy senior night and retirement to Butler Blue III who also served his last game inside Hinkle.