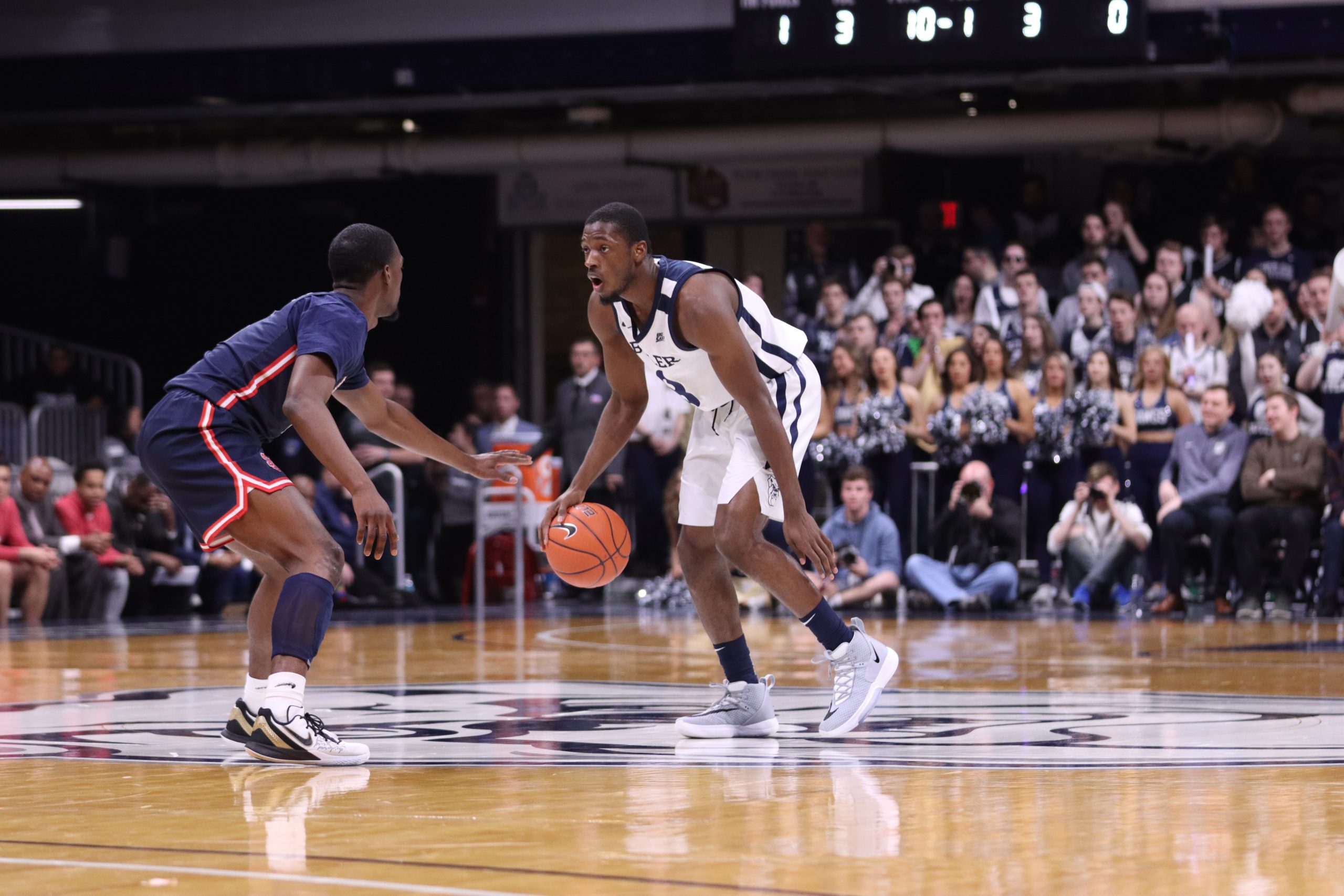 Kamar Baldwin makes a move during a game against St. John’s on March 4. Photo by Xan Korman / Collegian file photo.

Two weeks ago, the Butler men’s basketball team was facing the possibility of finishing in the bottom four of the Big East and playing in the first round of the Big East tournament. Three straight wins later, the Bulldogs are a five seed in the tournament and they safely avoided playing on Wednesday. Here’s what you need to know ahead of Butler’s quarterfinal matchup against the Providence Friars.

1. Butler split the season series with the Friars.

Butler’s performances against Providence this season were indicative of how the Bulldogs were playing at that point in the season. The first contest between these two teams came on Jan. 12. The Bulldogs won the game 70-58 in convincing fashion, winning their third straight Big East game to start conference play. At that point, the Bulldogs were 15-1 and at the top of the conference. Their defense was elite like it had been all season up to that point and four different players scored in double figures. The Friars shot just 31.7% from the field and 6-of-25 from beyond the arc.

The other contest came at Hinkle Fieldhouse on Feb. 1. This game came at one of the tougher points of the Butler’s season. For starters, the Bulldogs had lost three of their last five games after starting 3-0. More importantly, Butler was missing Aaron Thompson who was sidelined with a left wrist injury at the time and Christian David had just recently torn his ACL against Villanova. As a result, Butler’s lineup had very little depth and despite double figures from each starter, the Bulldogs got just one bench point and lost 65-61. Providence’s Luwane Pipkins finished with 22 points and knocked down all 10 of his free throws.

Butler will never be fully healthy again this season, but the current injury report for the Bulldogs is much closer to what it looked like on Jan. 12 than it did on Feb. 1.

2. The Friars are one of the hottest teams in the Big East.

Creighton has taken the Big East by storm and taken most of the publicity late in the season, and for good reason. But the Friars are quietly one of the hotter teams in the Big East and their 10-6 finish in conference is a result of that. Providence hasn’t lost since Feb. 12. They have won six straight including victories over Seton Hall, Villanova and Marquette in that time span. To finish the season, they absolutely dominated Depaul in a 93-55 destruction.

The difference over the last several weeks has been their 3-point shooting. Since Feb. 12, the Friars have shot worse than 40% from deep just once — in that game they shot 39% — and have made at least seven threes in five of those matchups including double digits twice. The Bulldogs held Providence to just 12-of-45 from beyond the arc in the two games they played this season, but everything suggests that the Friars have a different level of confidence from beyond the arc at this point in the season.

A month ago, Providence wasn’t anywhere near the tournament, now they are safely in the field and on the short list of teams that nobody wants to play.

3. The elephant in the room — Butler’s Big East tournament performance.

Since joining the Big East prior to the 2013-14 season, the Bulldogs have been — to put it nicely — less than stellar in the Big East tournament. They have just one win in the conference tournament that came in 2018 behind 32 points from Kamar Baldwin. Luckily, the Bulldogs aren’t in need of win at Madison Square Garden to secure a spot in the tournament.

However, the Big East tournament hasn’t always been indicative of what Butler will do in the tournament. In 2017, the Bulldogs went 12-6 in conference before losing in the first round to Xavier only to make it all the way to the Sweet 16 the same season.

Some sort of success in New York isn’t crucial from a tournament perspective, but the Bulldogs have more momentum right now than they have since early in conference play when they started the Big East with three straight wins. Butler has a chance to really be rolling heading into Selection Sunday if they perform well at MSG.