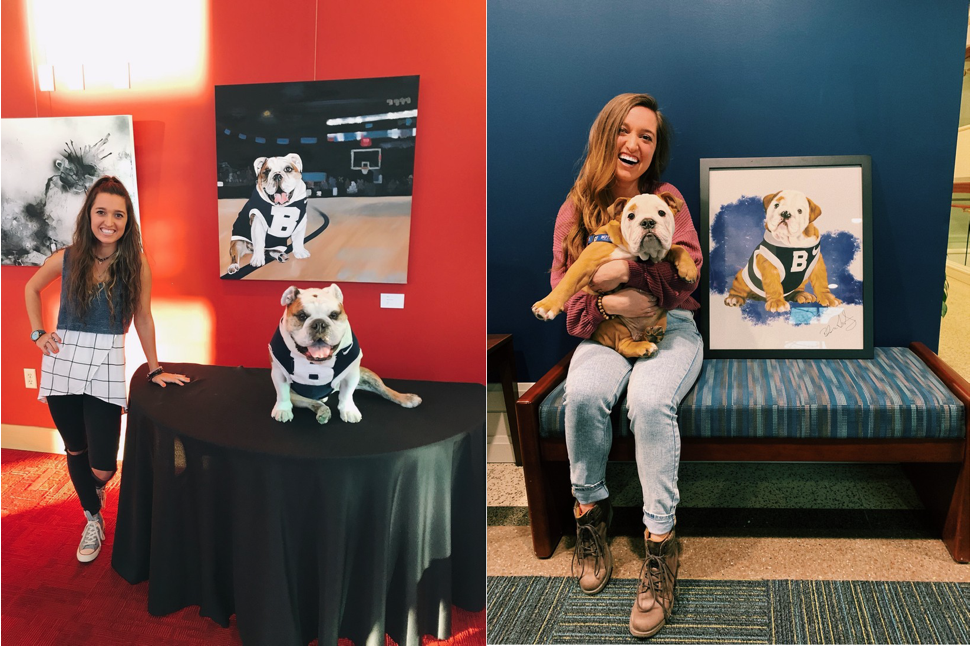 It’s safe to say that both bulldogs are preeminent figures on campus. When the dogs aren’t greeting prospective students or cheering on current students, their slobbery, wrinkled faces constantly gaze at students from hats, stickers, photos and shirts. For Trusty, they gaze through her artwork.

Most students will not make it through high school without taking at least a few required art classes. The same was true for Trusty, who took the typical painting, drawing and ceramics all three years of school. While she had always been creative, making art was never a primary passion; not until she was selected for an AP Studio Art class during her senior year.

“Since I spent a whole entire year making art, and it was the whole senior year thing of applying for college, everyone talks about ‘What do you want to do?’” Trusty said. “I was like, ‘I see myself doing art.’ It was hard because a lot of people don’t take you seriously, but at the end of the day it was what I was most passionate about, so I want to pursue art in any way that I can.”

Trusty first pursued art as a graphic design major at Ball State. After one year at the school, she didn’t feel it was the right fit. So, in 2017 Trusty made the move to Butler and added an education minor to her art and design major.

One of Trusty’s oldest friends on campus is Stevie Sedlacko, a junior healthcare and business major. The two met during Sedlacko’s first year, when they both lived in ResCo.

“I probably spent 85% of my time in her room, hanging out with her roommates,” Sedlacko said.  “They were kinda like my first friends here.”

Sedlacko knew Trusty was an artist from the start, and he has been cheering her on ever since.

“Every time she has an idea or finishes a painting I’m the first one to say, ‘Hey let me see it, let’s see what you’re working on,’” Sedlacko said. “I got spoiled freshman year, seeing all the designs she created. I think she’s mastered pretty much all mediums across the board.”

One of her earliest art assignments would be the catalyst for her art career at Butler.

“I was in a painting class where we had this major project of either making a big painting or series of small paintings,” Trusty said. “And for me, I was like, ‘Go big or go home.’ At the time it was almost a year since I had transferred here and I loved it, and felt like this was my home now. So I was like, ‘I’m gonna paint Trip, because I’m a bulldog.’”

Trusty did just that. She painted a realistic portrait of Trip on a canvas that stood nearly four feet tall, which was featured in Schrott Center for the Arts for a few months in 2017. Shortly after, Trip posed with his portrait, signature turkey leg and all.

But the bulldog art did not stop there. During her junior year, Mark Brouwer, executive director of annual giving, reached out to Trusty after seeing her painting of Trip. Brouwer had a small bulldog statue on his desk that he commissioned her to repaint. Brouwer’s freshly-painted desk keepsake got the word out about Trusty’s painting prowess. Shortly after, she was commissioned to repaint her biggest bulldog yet.

“They had a really old [bulldog statue] that I think students painted about five years ago,” Trusty said. “It was sitting in the basement of Jordan for forever. Once they saw my mini statue and the painting, Mark connected with a lot of higher-up people in the university. That’s how they got ahold of me to do the bigger [statue] that’s in Jordan right now.”

The statue was delivered to Trusty’s home over winter break, where she painted it in her free time.

All of this, however, is before Blue IV broke the internet.

“Blue had his little debut and social media was just all of his pictures,” Trusty said. “Just for fun, for me personally, I can’t just not paint Blue if I painted Trip.”

Trusty’s third bulldog piece arrived in the form of a digital painting of Blue’s first Instagram photo. The portrait was created using Procreate, an illustration app that allows the artist to paint on a tablet using a stylus, in the same way they would use a traditional canvas and paintbrush.

Two years after first meeting Trip, history repeated itself when Trusty was able to pose with Blue IV in front of his portrait. The meeting was set up after Evan Krauss, marketing specialist and Blue’s handler, reached out to Trusty.

“She started posting the process of her painting Blue, and I believe it was just a few days after we debuted Blue,” Krauss said. “Once we saw it was finished, we were just blown away by her accuracy and depiction of Blue. She delivered us a framed piece of it, so we were able to hang it up in our office. It meant so much to see someone put so much time and effort into their craft just for our mascot.”

Blue’s portrait rounded out Trusty’s Butler experience, making her decision to transfer something that she will never regret.

“It’s kind of been like a process,” Trusty said. “Bigger painting sophomore year, statue junior year, Blue senior year. It’s like I did a bulldog every year.”

Following graduation, Trusty plans to pursue a career in graphic design, along with participating in art therapy for children with disabilities. Her entire portfolio can be found on her Wix site.