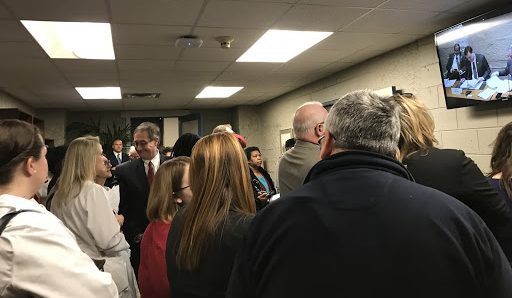 My first task as a Butler student was to read “Just Mercy” by Bryan Stevenson for the required summer reading before first year. Shortly after, the Desmond Tutu Peace Lab brought Stevenson’s stories about justice and redemption to life when they hosted Ian Manuel, one of Stevenson’s clients, at Butler. Now, as the book’s film adaptation is ending its run in theaters, Indiana’s legislature is considering a bill that counters the sentiments of justice embodied by these works and experiences.

Stevenson’s book details many instances of injustice in our criminal justice system: one story is about Manuel. When he was 13 years old, Manuel was coerced into an attempted robbery, and after the attempt failed, a bystander suffered a nonfatal gunshot wound. After he turned himself in, his counsel advised him to plead guilty to minimize the sentence to 15 years. Manuel was tried as an adult, given life without parole in an adult facility and kept in solitary confinement to limit contact with adult inmates. In 2016, Manuel was released due to the work of Stevenson, the Equal Justice Initiative and Manuel’s victim, who had forgiven him.

Under the original version of Indiana Senate Bill 449, a case like Manuel’s could have allowed a child as young as 12 to be tried as an adult and subsequently held in adult facilities in Indiana. State Senator Erin Houchin, who authored the bill, said Senate Bill 449 is meant to close a loophole that prevented the Noblesville school shooter from being tried as an adult.

The bill, which was amended on Feb. 3, however, does not include this provision anymore, and Siobhán McEvoy-Levy, professor of political science and peace and conflict studies and director of the Desmond Tutu Peace Lab, does not believe the bill covers this issue.

“It doesn’t do anything to prevent school shootings,” McEvoy-Levy said. “It doesn’t have any benefit for public safety at all.”

Instead, the bill could have the opposite effect. Without the provision to change the minimum age for children to be tried as adults, Senate Bill 449 actually expands direct file for 16 and 17 year olds to be tried as adults through an “attempted” crime caveat. Currently, Indiana code states that the adult courts have jurisdiction over juveniles that are 16 or older if they allegedly committed a list of various violations. These violations include murder, kidnapping and rape, to name a few.

Senate Bill 449 would expand this list to include any attempt of those listed violations. Children would be tried in adult court for any attempt to commit these violations, regardless of whether they succeed in their attempt.

This move stands in opposition to the national trend to decriminalize youth. The Children’s Policy and Law Institute of Indiana, a member of the National Juvenile Justice Network, was established to reform Indiana’s laws that criminalize youth. The organization’s president and founding member of the Indiana Coalition for Youth Justice, JauNae Hanger, believes this bill is a move in the wrong direction.

“States are moving away from putting children in the adult system because it doesn’t work,” Hanger said.

According to the Equal Justice Intiative and the UCLA Criminal Justice Reform Clinic, children that are held in adult facilities are nine times more likely to commit suicide and five times more likely to be sexual assaulted than those held in juvenile detention. Additionally, they are often held in solitary confinement. These experiences are extremely traumatic, and the children held in adult facilities are not guaranteed the rehabilitative services the juvenile system offers. The lack of services is especially damaging because children are uniquely capable of rehabilitation.

During adolescence, youth decision making is significantly impacted by peer pressure and undeveloped impulse control. But, given time to develop, children can rehabilitate.

“They have both the opportunity to develop and to change,” McEvoy-Levy said. “When you’re 16 you make a decision more irrationally than when you’re 30.”

When children are not exposed to rehabilitative services, however, they are more likely to commit additional crimes upon release. The rate of violent crime recidivism for children who were transferred to the adult system is 39% higher than their peers who remained in the juvenile system.

Senate Bill 449 would also disproportionately affect youth of color. In state fiscal year 2018, 156 juvenile cases were directly admitted to adult court; 69% of the individuals in these cases were black.

“It’s bills like these that really perpetuate that whole system of the school-to-prison pipeline,” Tarryn Harris, a first-year political science and international studies double major, said.

Considering these factors, Senate Bill 449 would not make Indiana safer — in fact, it would do the opposite. This bill would lead to more crime in our communities. It would increase the number of children in the adult court system. It would inflict irreversible damage on the most marginalized and vulnerable Hoosiers.

As students, professors, alumni and community members in this state, we should reject this attempt to destroy our children’s potential. We must demand that they receive just mercy.

On Feb. 4, Senate Bill 449 passed the Senate, and on Feb. 11, it was assigned to the House Committee on Courts and Criminal Code. If the bill passes through this committee, it will move to the House for a vote. While the future of the bill is uncertain, I urge concerned citizens to express their discontent. If you would like to register your disapproval with your representative, you can find their contact information here. You can also get involved with the Indiana Coalition for Youth Justice or the Desmond Tutu Peace Lab at Butler University.