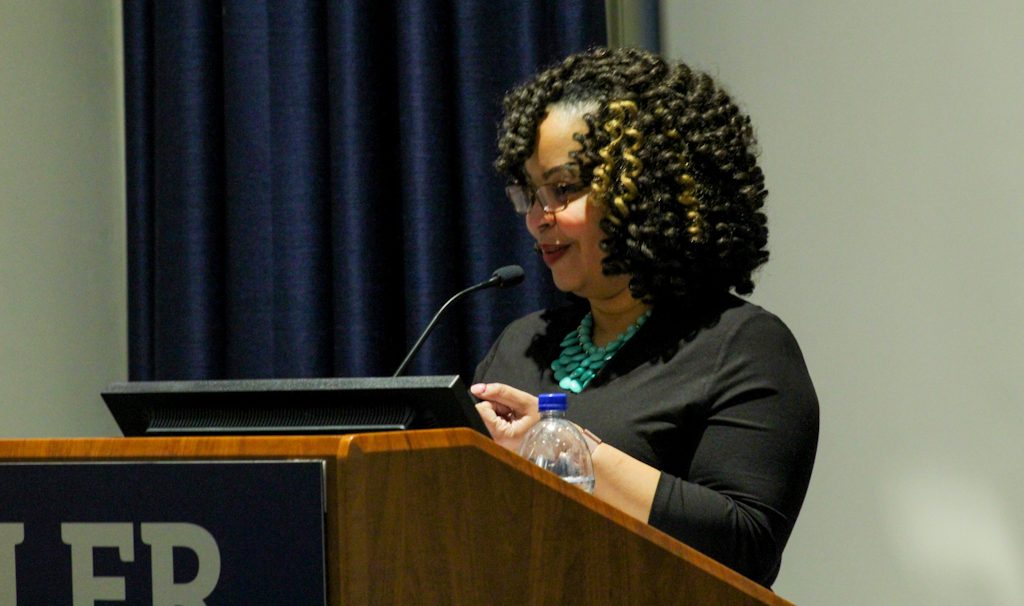 “Until the lions have their own historians, the history of the hunt will always glorify the hunter.”

The ancient proverb, made famous by Nigerian novelist and essayist Chinua Achebe, author of “Things Fall Apart”, is what fuels Wendi Thomas’ work every day.

She believes the best journalism disrupts the status quo and holds accountable the hunters and lions of the world.

“Journalism is printing what someone else doesn’t want printed, and everything else is PR,” Thomas said. “Our role is essential to democracy and holding the powerful accountable and just telling the community what’s going on so we can have a greater sense of who we are and what our struggles are.”

The 1993 Butler University graduate spoke Feb. 17 in the Johnson Room in Robertson Hall about her role as founder and editor of MLK50: Justice Through Journalism, a nonprofit online news platform that produces journalism that “disrupts the status quo,” as she described it.

MLK50’s stories, which are published on the organization’s Medium website, are centered around economic, racial and class inequality primarily in Memphis, Tennessee, which is the second poorest large city in the U.S.

“We believe in a more accurate story and a fuller story, because it amplifies the voices of people who are typically overlooked,” Thomas said. “So I wouldn’t say that we give each of them voices, because they already have voices — we’re helping make sure that they’re heard.”

MLK50: Justice Through Journalism started as a year-long investigative project which was prompted by the 50th anniversary of Martin Luther King Jr.’s assassination, which occured in Memphis in 1968.

MLK50 covers the issues related to equality for which King advocated as a civil rights leader and putting them in context in Memphis, which has a two-thirds black population. One in four people in Memphis live below the poverty line.

“It [is] an incredible chance to create the kind of newsroom that I’ve always wanted to work in,” Thomas said. “This newsroom would be led by people of color, and it would center the most vulnerable people — the people that Dr. King would center, were he still alive.”

Thomas first came up with the concept for MLK50 while completing the Nieman Journalism Fellowship at Harvard in 2016, and launched the digital newsroom in April 2017 when she returned to Memphis the following year, she explained at Feb. 17’s event.

“I think MLK50: Justice through Journalism is necessary because we need to change who tells the story,” Thomas said.

Thomas’ path in journalism started her first year at Butler in 1989, when she switched from studying pharmacy to journalism.

“It’s great to be back in the place where I first fell in love with journalism,” Thomas said to the crowd.

At Butler, she worked as a columnist for The Butler Collegian, writing columns she now considers to be “trash” writing, as she said sarcastically at the event.

“That’s what you’re in school to do: to experiment, to test, to fail and to try again,” Thomas said.

“I’m really proud… to see somebody focusing on communities that are often disenfranchised and generally underrepresented and not spoken about in the media,” Colston Patterson said.

During her college years, Thomas also formed a lasting relationship with her advisor and professor Art Levin, who was head of Butler’s journalism department at the time.

“He was amazing,” Thomas said. “We stayed in touch after I graduated. He was an amazing man and really believed in me long before I believed in myself.”

Levin passed away Dec. 27, 2019. Thomas said she’s carried Levin’s impact with her through the hard times in her career — such as when she was the second-ever full-time female black columnist at a newspaper in Memphis, and was eventually switched by her boss from the position after receiving dangerous threats from a reader. The first woman in Memphis to hold such a position was Ida B. Wells, African-American investigative journalist and leader in the civil rights movement, 122 years prior.

“I was demoralized,” Thomas said.

Thomas left the newspaper shortly after the incident, and within the next year was accepted to the Nieman Fellowship at Harvard.

The majority of MLK50’s readership are black women, which is also intentionally the majority of Thomas’ freelance and part-time reporting and editing staff.

Thomas had just $3,000 to use when she launched the newsroom — three gifts of $1,000 each from two friends and an uncle of hers. As the project gained momentum in its first year, Thomas applied for grants from foundations and raised money to keep it going.

Today, Thomas is the only full-time employee, but MLK50 is hiring two more full-time staff members this spring — an employee to handle the business side of operations and a reporter.

“In a time when there is so much negativity about journalism, it just makes me so excited to be part of journalism,” Geertsema-Sligh said. “If journalism is not for justice, then what is it for? I really support — I really agree with her approach to journalism.”

To learn more about MLK50: Justice Through Journalism, visit mlk50.com or twitter.com/mlk50memphis.