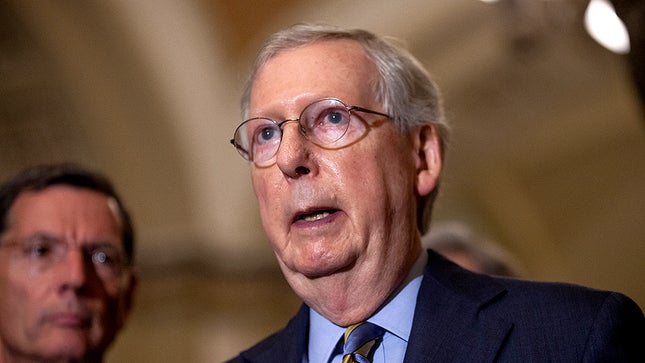 Sen. Mitch McConnell has delayed voting on a bill concerning gun control reform since it was passed to him in January 2019. Photo courtesy of The Hill.

Feb. 27, 2020 marks the one year anniversary of the House of Representatives passing H.R.8.

H.R.8, also known as the Bipartisan Background Checks Act of 2019, is a bill that requires universal background checks on all gun sales.

Since H.R.8 was passed on to the Senate, it’s been sitting on Majority Leader Mitch McConnell’s desk. His inaction is costing lives.

Twenty-five years ago, Congress established a background check system with the Brady Bill, which required a five-day waiting period for buying a firearm.

People who are prohibited from obtaining a gun — the mentally ill, convicted felons and domestic abusers, amongst others — can go online or to an unlicensed seller and purchase a gun without a background check. As of 2018, Armslist.com ran 1.2 million ads for guns that did not require a background check.

If H.R. 8 becomes law, unlicensed sellers will need to conduct background checks. If they do not comply, they will face fines and possible jail time. These penalties will decrease gun trafficking and help law enforcement track guns used in crimes.

Gun trafficking is a huge problem, and Illinois’ and Indiana’s weak gun laws enable it. Almost a quarter of guns recovered from crimes committed in Chicago can be traced back to Indiana.

It’s funny how people are comfortable talking about what regular citizens, even young children, can do to prevent gun violence but suggesting that we hold politicians accountable is outrageous.

There are ways that communities can come together and teach people how to deal with problems other than extreme violence. But why do we have to suffer while our representatives are essentially profiting off of our pain?

Rep. Susan Brooks, who represents Indiana’s fifth congressional district, voted against H.R.8. When asked why, she said she didn’t want to make it hard for farmers to borrow guns. I’m not kidding.

What’s actually happening is it’s $12,600 she’s received from the NRA that’s talking. If I have to be appreciative of anything, I should be glad she didn’t accept $1.2 million like Sen. Mike Braun or $2.8 million like Sen. Todd Young.

Both Braun and Young have yet to publicly acknowledge the existence of H.R.8. Although the bill had bipartisan support in the House, and over 90% of Americans support background checks, they’re being eerily silent.

This isn’t as shocking to me as it may be to other people. I had a friend that went to a Mike Braun town hall and was told by his staff that Mike Braun is not a representative. He doesn’t vote for other people — “he votes for what he feels inside.”

What I can conclude from that statement is that if certain policies don’t affect him, he doesn’t worry about them. Sen. Braun, prove me wrong.

Tell me you’re heartbroken when you hear that your black constituents are 15 times more likely to die by gun homicide than white residents. Tell me you feel something when you hear 61% of gun deaths in Indiana involve minors.

Waiting for the president to tell you to take a vote on a bill is ridiculous. At that point, just admit that you care more about $1.2 million from the NRA, which McConnell gladly accepted, than the 100 Americans being shot and killed every day.

I’m not sure what it will take for McConnell, or the rest of the Senate, to step up. It’s been said a million times before but I’ll say it again: thoughts and prayers are not enough.

Simply thinking about communities affected by gun violence is not going to save anyone’s life. I’m not dumb enough to believe that these senators, who are complacent in the deaths of Americans, think about and pray for victims and survivors.

If they did, it would eat them alive. We wouldn’t be where we are today.

In the 365 days that have passed since H.R. 8 made it through the House, the Senate could have saved a portion of almost 40,000 lives. Mitch McConnell, make it right. You have blood on your hands.