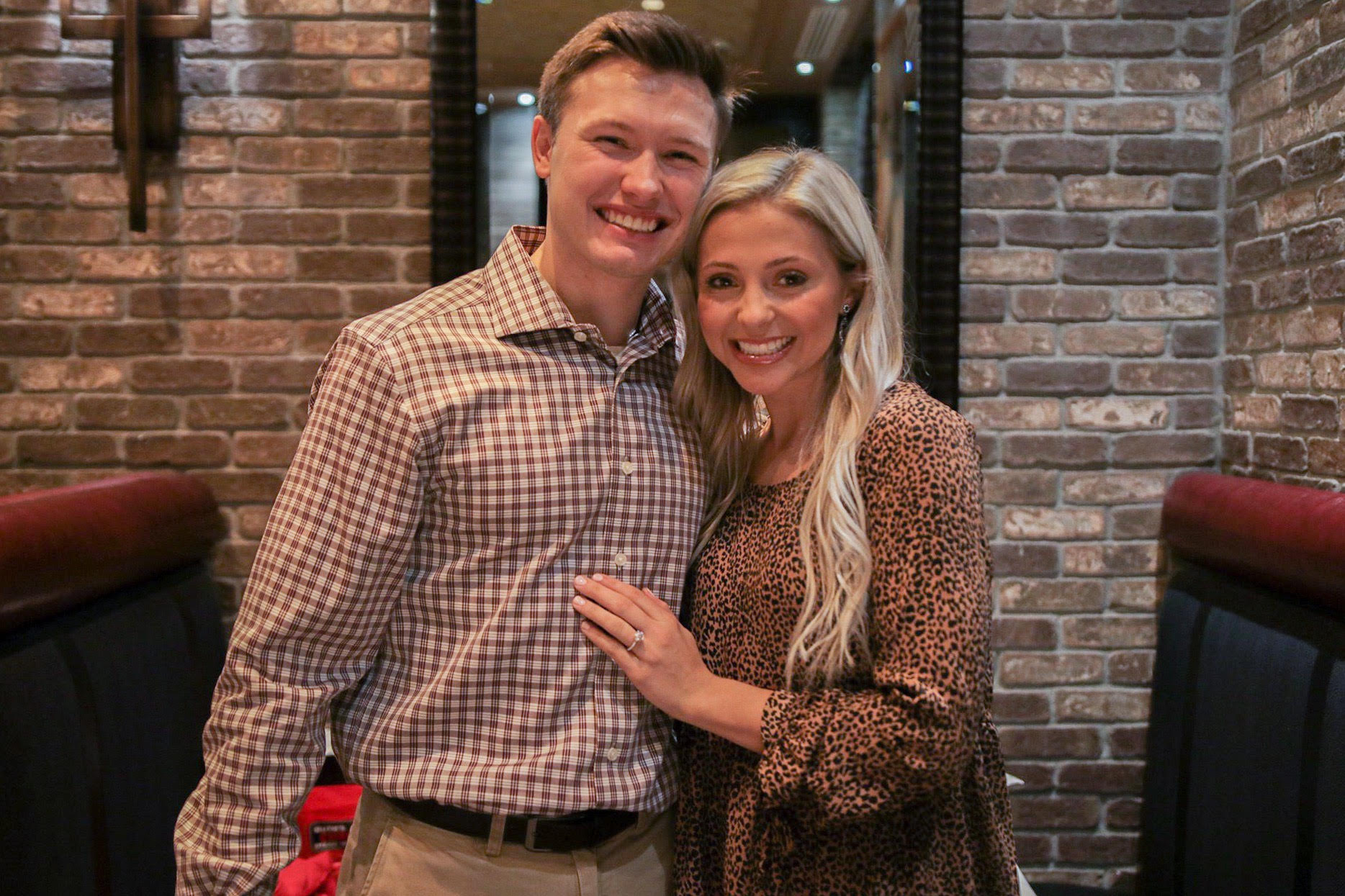 Picture this: you’re trying to leave a concert with one of your best guy friends, and you’re trying to navigate through the crowd when he reaches back to grab your hand. That’s when the realization hits you. He direct messaged you his number and took you out to dinner at Scotty’s Dawghouse before going to a Rascal Flatts together.

Is this a date?

“I was so naive,” Tate Fritchley said.

After all, when her friend Rayder Hobbs let her know he had front row tickets to Rascal Flatts, she wasn’t going to turn it down. Because they were just friends, right?

“He tries to grab my hand, and I was like, ‘Oh no, we are just friends,’” Fritchley said.

Fritchley, a senior marketing major, didn’t think much would come from that one-sided date. She couldn’t guess that the same friend would one day get down on one knee and propose to her.

Hobbs, a senior business administration major, knew from the beginning.

“I remember just trying to make you laugh as much as I could,” Hobbs said.

One day, casually talking in speech for business class — where the two met — turned into an Instagram DM. Hobbs feigned homework trouble and asked for her number — just because it’s easier to text than DM, of course. Even though Fritchley saw right through his tactics, she gave her number to him anyway.

Besides, Fritchley had noticed Hobbs in class too.

“There was always this guy smiling at me, and I was like, ‘Who is this kid who just keeps smiling at me all the time?’ and I was so confused,” Fritchley said.

While she gave him her number, Fritchley still had her reservations. She had just ended a three-year relationship and didn’t feel as though she wanted to jump into another one — especially so early in their first year of college.

This didn’t stop Hobbs from trying.

“He was very persistent, even after I told him I just want to be friends,” Fritchley said. “He continued to take me to lunch dates as friends, he took me to Bazbeaux for my first time which is so good, we went to a Pacers game. He was just okay with it and I think he knew eventually we would start dating.”

Inviting her to Rascal Flatts was just the first step, but that didn’t go as planned despite his efforts.

“I called my dad specifically like, ‘Dad, what can you do? I really am crushing on this girl,’” Hobbs said.

Hobbs tried grabbing her hand as they were leaving the concert, but Fritchley was not ready for that. She realized how it must have looked and texted him after the concert and Hobbs said she “basically friendzoned [him] out of the blue.”

Hobbs knew Fritchley was worth the wait and decided he was in it for the long run. He continued taking Fritchley out on friend dates and by October of their first semester, they were dating.

They had to face long-distance. Fritchley is from Evansville, Indiana and Hobbs lives in Indianapolis; they were going to be three hours and a time change away from each other over the summer. They decided they were going to make the drive to see each other every other weekend because their relationship was worth it.

“We were just kind of like, ‘Let’s just take this a day at a time. Let’s not think too far into the future,’” Hobbs said.

Hobbs proposed at the same restaurant – Ruth’s Chris – and in the same booth that they had sat in for their first real date. The decision to get engaged while still in school was not hard for the couple, as they had been thinking ahead for the future.

No matter their start, Hobbs always had that gut feeling.

“It was kind of one of those things that there wasn’t a guarantee that anything was going to happen but I still kinda thought that it could,” Hobbs said. “We were treating each other as friends but I kinda always wanted it to be more.”

Ironically, on the first day of their speech class, their professor said to them:

“Look around, there might be someone in here you’re gonna marry.”

Fritchley and Hobbs like to laugh about that now.