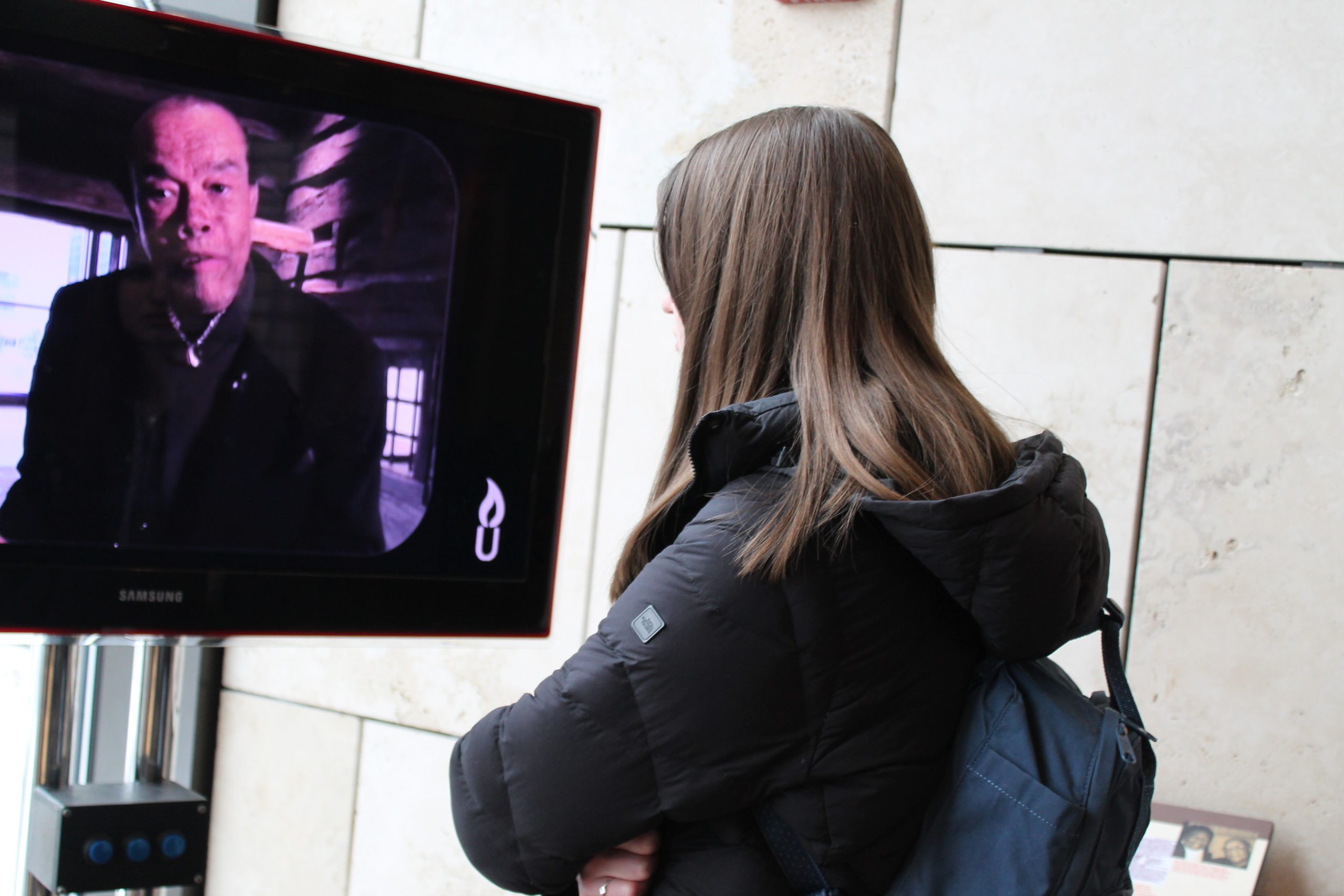 People of all ages and races observe the haunting relics of past injustices, speaking in whispers because to be loud would be to disrespect the people who have worn these chains and manacles. However, the atmosphere is warm and welcoming. Vibrant and colorful works of art by black artists cover the walls. The sound of a jazz saxophonist performing a Beyoncé cover echoes through the halls of the building. While this place is a monument to the millions of people across history who have had their liberty stripped away by the institution of slavery, it is also a celebration of survival and freedom.

A group of approximately 50 Butler University students and faculty traveled to Cincinnati, Ohio to visit the National Underground Railroad Freedom Center museum on Feb. 8. The trip was organized by members of the Desmond Tutu Peace Lab as well as SGA’s Diversity, Equity, and Inclusion board.

The Freedom Center, located in the heart of downtown Cincinnati, is a museum dedicated to educating the public about slavery. The Freedom Center focuses on slavery in the U.S. and across the world. In combination with exhibits detailing the history of the African slave trade beginning in the 15th century, the Freedom Center provides contemporary information about modern-day slavery and human trafficking.

“The most powerful and the most meaningful pieces I think are the real artifacts, like the manacles that the slaves were forced to wear, chains, the KKK costume,” McEvoy-Levy, a professor of political science and peace and conflict studies at Butler, said. “The things that just bring it to life and remind you that there were real human beings on both sides, who were being abused and were abusers.”

The museum houses several unique exhibits, including the last surviving slave pen in the U.S. This building was transported to the Freedom Center from Germantown, Kentucky and was reconstructed on the second floor of the museum. The pen was used to temporarily hold slaves, who would then be sold and sent to locations across the southern U.S.

A large section of the museum has an exhibit detailing the history of slavery in the Americas from Christopher Colombus to the Jim Crow era. Butler students had the opportunity to watch a short film depicting the story of a runaway slave, to touch unprocessed cotton and learn about how slaves would have cleaned it, and to read about abolitionists such as Sarah Grimke, Frederick Douglass and John Brown.

Emma Gifford, a first-year political science major, was shocked by how many common misconceptions about slavery that Freedom Center tour guides debunked.

“There is no one correct interpretation of history,” Gifford said. “There’s many different accounts, and I think exploring as many of those different accounts as possible, especially the minority accounts, is really important. It’s obviously not my fault that I had the incorrect information, but it just reminds me how much reform can be done through education.”

The tour guides at the Freedom Center were knowledgeable and passionate about educating visitors about the injustices that came from slavery in the U.S. One guide told the story of Aminah Brenda Lynn Robinson, an artist whose work is featured at the museum. Robinson was aware that her ancestors hailed from Angola on the West coast of Africa, which was extremely uncommon for descendants of slaves.

“I forget that it’s almost a luxury to know who your family is and to know your past, when a lot of black people in America, they don’t know who their family is beyond really like 200 to 300 years ago,” Gifford said. “And it makes me feel awful.”

In addition to historical information, the Freedom Center has a strong emphasis on modern slavery and how to prevent it. It is estimated that as many as 45 million people across the world today are enslaved, which is more than at any other point in history.

The modern slavery exhibit features the stories of several real-life former slaves that live across the globe today. A Haitian girl forced into domestic servitude and abuse, an Indian boy working to make bricks without pay, a Moldovan teenager sold to an Italian brothel and a Brazilian man forced into hard labor are among the stories told.

The exhibit also ensures that visitors understand that there is still slavery inside the U.S. People are trafficked domestically across the country. The exhibit discusses multiple different types of modern slavery and human trafficking, and focuses on awareness and prevention.

“I thought that was really interesting to talk not only about the history, but what’s happening now,” Gifford said.

The Freedom Center is currently hosting a temporary exhibition, MotelX, which is a multimedia human trafficking prevention art installation. While there is normally an additional admission fee to enter this exhibit, Butler students were able to see MotelX for free on Saturday.

The space is decorated to be a fully-furnished hotel room, and the exhibit is both immersive and interactive. By pulling back bedsheets or opening dresser drawers, visitors can discover messages telling the stories of what a victim might be experiencing in a hotel room such as the one in the exhibit.

McEvoy-Levy said she hopes the immersive experience will be “memorable” for students.

Reilly Simmons, a Desmond Tutu Peace Lab intern and Diversity, Equity, and Inclusion board member said she was impacted by this exhibit.

“I had never seen something like that before,” Simmons, a senior international studies, political science, and Spanish triple major, said. “I think my heart rate skyrocketed.”

Simmons is also the student who conceptualized and organized the trip to the Freedom Center.

“I thought we should do it in February for Black History Month,” Simmons said.

As both an intern for the Desmond Tutu Peace lab and a member of the Diversity, Equity, and Inclusion board’s education and advocacy committee, Simmons was positioned to be able to plan an event cosponsored by the two organizations.

Butler’s Peace Lab is a collaborative undergraduate thinktank for social justice and peace-related issues. The organization is comprised of students, interns and three faculty fellows.

The mission of the Desmond Tutu Peace Lab is to develop and disseminate innovative and strategic approaches to peace education, leadership, policy, practice and advocacy.

The organization organizes study tours, such as the trip to Cincinnati, as well as guest lectures and other activism-related activities. The Peace Lab is designed to fit the social justice interests of the students involved.