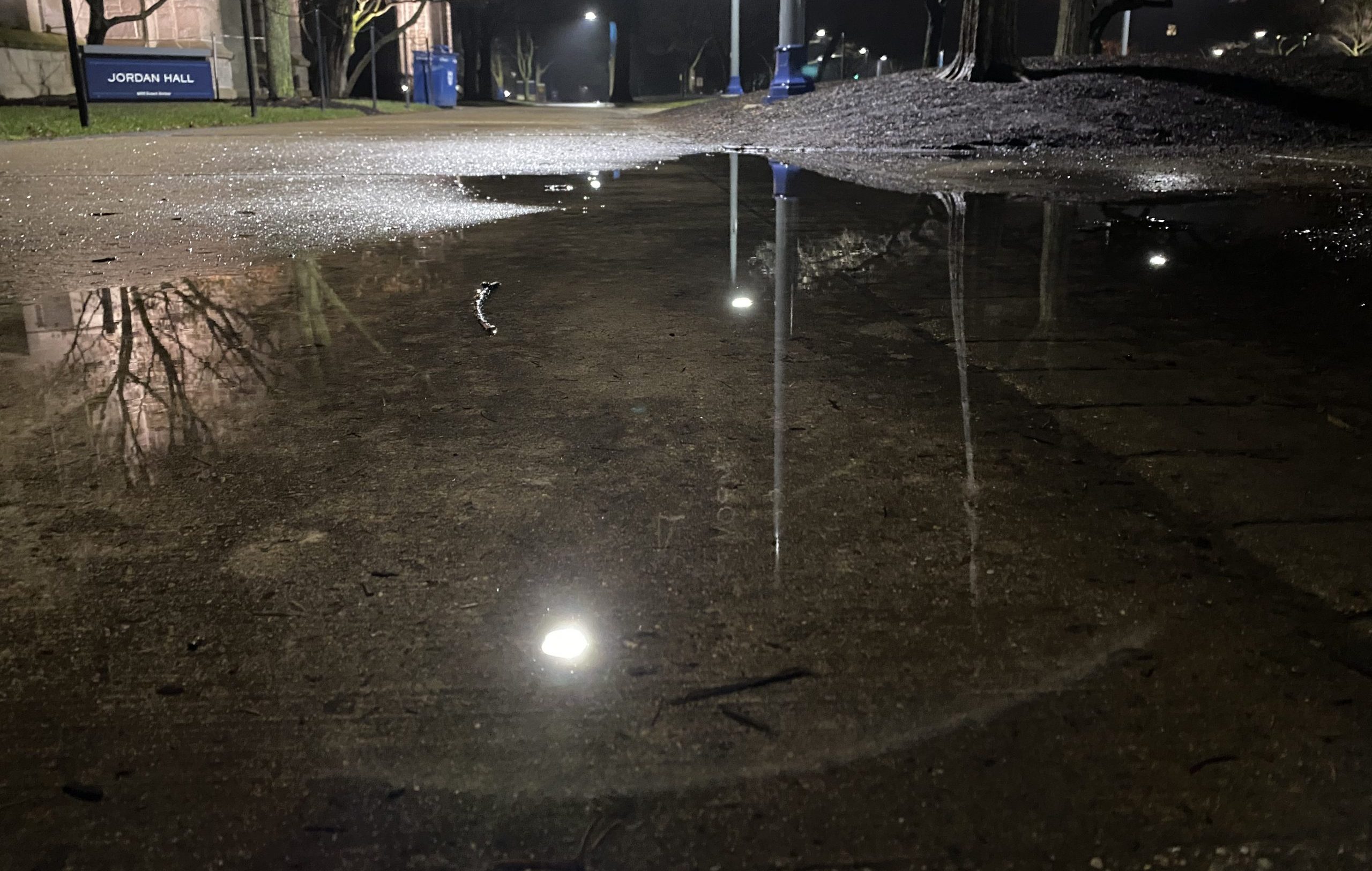 Photo courtesy of the Butler Collegian.

One of my earliest memories as a first year was one drenched in rain. I ran out of my dorm ready to make my way to Gallahue for an 8 a.m. lab. What I didn’t realize at the time was that there would be more than a few roadblocks on the way. Huge rain puddles were now obstructing the main sidewalks of the campus, placed there by a storm which had been raging all night. By the time I had gotten to class it was too late for my shoes and socks. It was that day I learned the importance of having a good umbrella and parkour skills on a rainy day.

This story is not the only one of its kind. From stories of being soaked by passing bikes to other tales of students not checking the forecast before making wardrobe choices, many Butler students can relate to the struggles of traveling through the massive puddles which tend to litter the campus when it rains.

In Indiana, where the average rainfall is 42.4 inches each year, flooding on walkways and roads is definitely to be expected and the city of Indianapolis has taken steps to remedy the issue. However, sidewalk flooding is still very prevalent on campus.

At a time when projects like the $100 million sciences renovations and expansion project are in progress, it can be really easy to overlook little details like the sidewalks. Despite this, there are reasons why the sidewalks shouldn’t be ignored.

For one, the condition of the sidewalks is only going to worsen over time as most things do. It would probably be wise to address the flooding now before it gets out of hand. It’s important to remember that unlike certain floors of Ross Hall or select rooms in Jordan Hall, the sidewalks can’t just be retired or closed.

Current projects that are underway shouldn’t just be put on hold for the improvement of the walkways, the notion isn’t reasonable and would likely cause more problems than it would fix. However, it would be nice to see plans happening in the near future which entails the addition of sidewalk drains or pipes to more problematic areas of flooding.

It’s also important to point out that the sidewalks are tools by which the university’s students use to travel from class to class. Any problem that affects a student’s ability to get to class or could pose a potential safety hazard should be a priority.

The sidewalks are basically the first visual impression people get when they enter the campus; it makes sense to make them as visually appealing as possible.

Sabrina Zeis, a first-year pre-pharmacy major, thinks that when the sidewalks flood, it tends to give the campus a much more unsightly appearance.

“The water on the sidewalks isn’t clean it is just gross and muddy and it just makes the sidewalk look gross,” Zeis said.

Spring is one of the most popular times for college visits; incidentally, it is also the rainiest season of the year. As such, if the university wishes to optimize first impressions then it would be in their best interest to remedy the flooding for anyone visiting on a rainy April evening.

Obviously, the university sidewalks pose a problem for students and the campus. This isn’t to say that all current projects which are in progress should be halted for the sake of improving the walkways. However, Butler students’ struggles should be enough to encourage future plans for improvement, so the stories of drenched socks and unintentional splashes from passing bikes are nothing but distant memories.