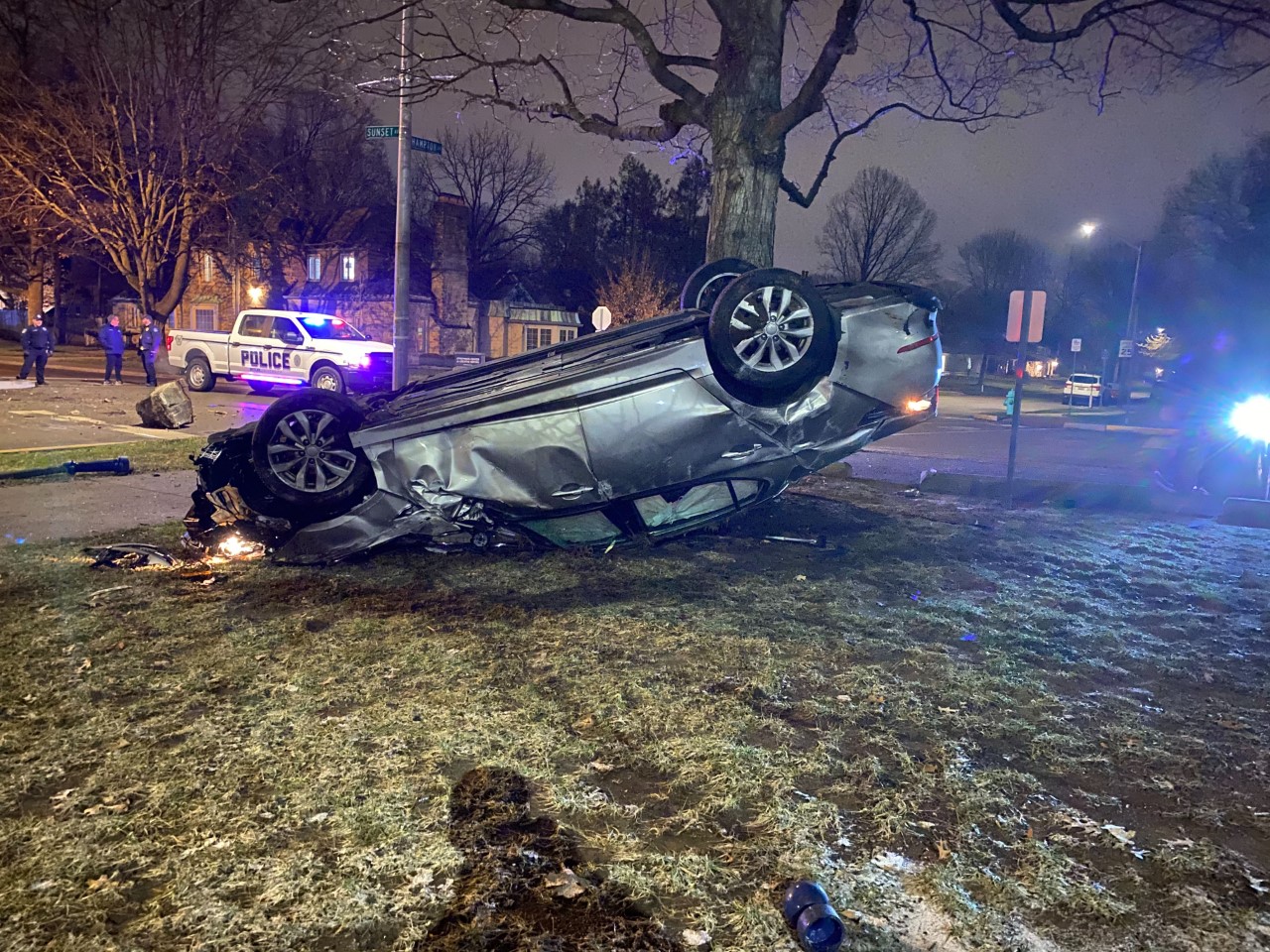 At about 12:12 a.m. on Jan. 28, some students in Ross Hall and ResCo suddenly awoke to the sound of a car accident just outside the dormitories. BUPD chief John Conley said a car driving south on Sunset Avenue hit a rock, flipped and slid across Hampton Drive into a tree.

Conley said the victim was in stable condition as of Jan. 29, and that he had no affiliation with Butler University.

It is still unclear what caused the driver to go over the triangular median which lies between Sunset Avenue and West Hampton Drive, where the car hit the large rock, as it has not yet been confirmed if alcohol was involved or if the driver fell asleep at the wheel.

It was clear, however, that his car was then sent airborne and he was likely in need of medical attention. BUPD officers who saw the accident from their nearby headquarters rushed to the car to help the victim.

As officers approached the vehicle, they noticed a problem. The driver’s arm was being crushed as it hung out of the car’s sunroof. The officers needed to assess the driver’s injuries, but could not fully do so until his arm was freed.

The officers soon realized they would not be able to do this on their own, so they summoned students standing nearby for help. What happened next is what BUPD Chief John Conley described as a testament to the character of a Butler student.

Conley said the students rushed to the officers’ aid, seemingly without hesitation, and were able to relieve the pressure on the man’s arm so the officers could pull his arm back through the sunroof and assess his injuries.

“It’s one of those things where we all talk about The Butler Way and some of the students showed that,” Conley said. “Denying that selfishness and stepping forward and coming to the aid, that’s The Butler Way.”

The victim was subsequently taken to the hospital in critical condition. At that point, BUPD began the process of handing the investigation over to the Fatal Crash Investigation Unit, a division of IMPD which specializes in crashes of a more severe nature like this one.

Dave Mizsak, a senior finance and management information systems major, was driving home from Irwin Library at about 12:20 a.m. when he came across the scene of the accident.

“That was pretty brave of them to step up and actually go help the police officers,” Mizsak said.

Mizsak also described seeing car parts strewn across the street near the accident, and was surprised at how a car could have flipped in such a location.

“It almost felt like the car was literally dropped from the sky,” Mizsak said.

Conley also said that this incident is a reminder that it is not just the right thing to do to help if you are a bystander in a situation like this, it is also state law.

If directed by a police officer to help in a situation, it is a legal obligation to do so — unless they are physically or mentally incapable of doing so. If an individual fails to do this, it is considered a misdemeanor and could lead to their arrest.

However, Conley said this did not seem to be the motivation of the students who helped.

“That was not the question at the scene, I think there were a lot of students that just automatically came and helped,” Conley said. “Whether he was wrong or not in what he was doing, he’s a human being, and being able to step forward and help somebody who’s in pain and suffering in order to get medical help to him, that’s a big thing.”

Damages from the accident included displacement of a large rock from the median into the road, knocking down a stop sign and abrasion to the tree in front of Ross Hall. The extent of the damage to the tree is unclear, however, the stop sign was replaced and the rock was moved back later that morning.

The case is still being handled by IMPD to determine any other contributing factors to the accident.

The Collegian will continue to follow this story as updates become available.