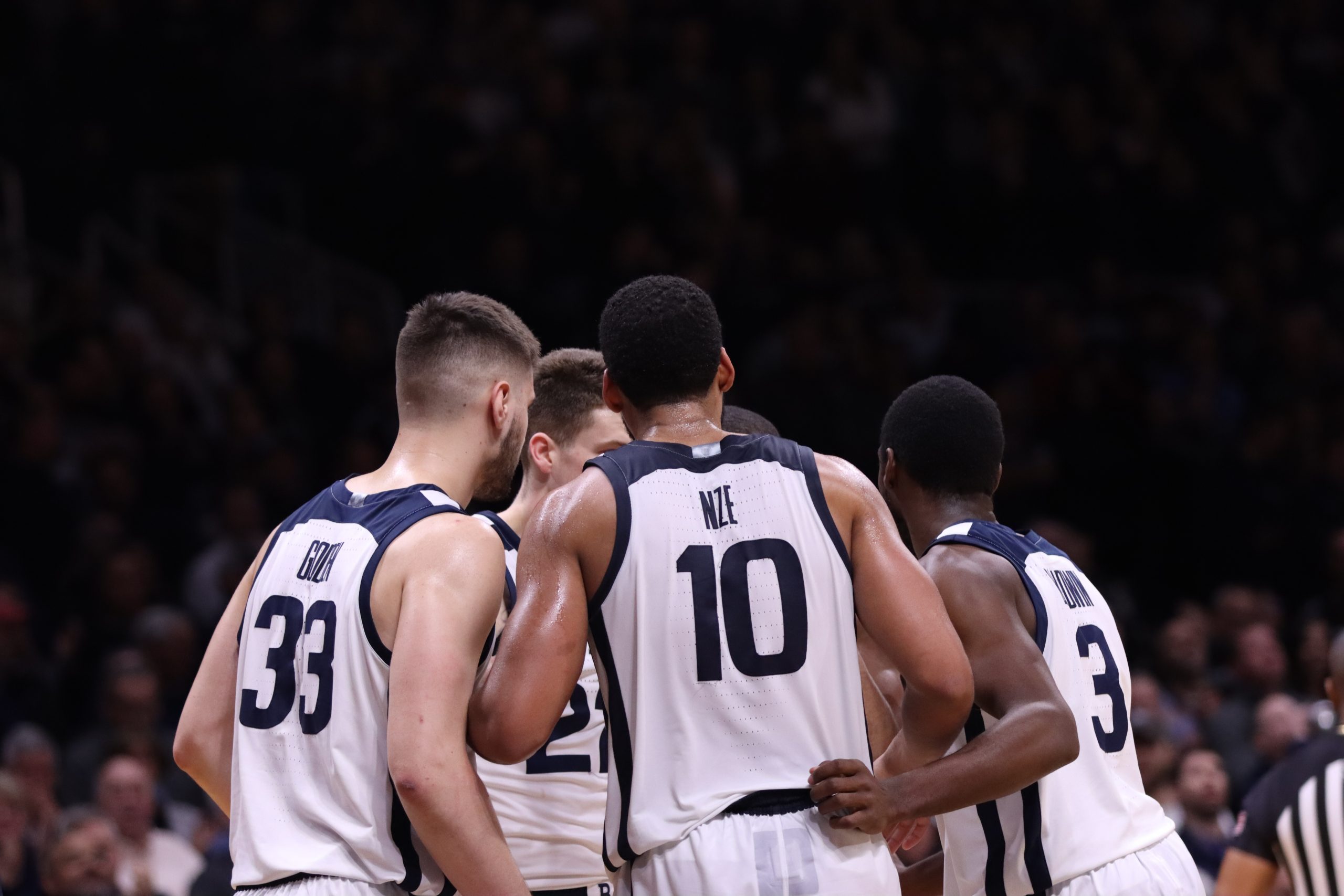 The Bulldogs huddle up during a game against Villanova on Feb. 5. The Bulldogs defeated the Wildcats 79-76. Photo by Xan Korman / Collegian file photo.

After a 1-1 week that included a home win against Villanova and a road loss to Marquette, No. 19 Butler returns to Hinkle Fieldhouse for their first matchup against midwest rival Xavier.

The Musketeers have had an uninspiring 2019-20 campaign after beginning the season ranked 19th in the AP Poll and picked to finish third in the Big East conference. With that being said, Xavier is playing some of its best basketball of the season. The Musketeers have won three straight — including their most impressive win of the season at Seton Hall — and are now just a game back from the Bulldogs, who sit in a tie for fifth in the conference

Here’s what you need to know and keys to a Butler victory on Wednesday night.

It’s in Xavier’s best interest that they don’t shoot a lot, because they don’t make very many. The Musketeers make just 6.5 threes per contest — 250th in the country — this season and Big East play hasn’t been much better. In 11 Big East games, Xavier has had only one game in which they’ve knocked down double-digit threes, and only two games in which they’ve knocked down nine or more.

Only once have the Musketeers knocked down better than 42% of their triples in a Big East game. For the season, they are shooting just 30.6% a team, which puts them just inside the top 300, nationally, in that category.

The Musketeers aren’t going to be dangerous from beyond the arc, but they make up for it with their athleticism and ability to get to the free throw line. The more Butler forces the Musketeers to be jump shooters, the tougher it will be for them to score.

If Butler makes them shoot it or earn it at the line — the Musketeers are the worst free-throw shooting team in the Big East — they should be in a solid position against Xavier.

2. The Musketeers won’t overwhelm you with sheer size, but they have long, athletic players at every position. And Butler is going to have to be physical to combat it.

Tyrique Jones, standing at 6 feet, 9 inches, is the tallest player in Xavier’s starting lineup. So, from a height standpoint, the two teams won’t start anybody with a clear advantage. With that being said, Paul Scruggs is the shortest player in the starting lineup and he’s going to check in at 6 feet, 4 inches. The other three Xavier starters — Naji Marshall, Zach Freemantle and Jason Carter — all stand between 6 feet, 7 inches and 6 feet, 9 inches.

On top of the size across the board, the Musketeers will put out some of the best athletes in the Big East. Scruggs, Jones and Marshall are three of the most athletic players at their respective positions in the conference. Scruggs will be taller and longer than both Kamar Baldwin and Aaron Thompson; Marshall will give anybody, whether it’s Sean McDermott or Jordan tucker, issues with his scoring and physical ability; Jones is one of the more physical bigs in the country. This would be a game that Butler could really use the defensive ability and rebounding of Christian David off of the bench.

3. Xavier rebounds the ball as well as anybody in the country. Butler will have to put an emphasis on finishing possessions on defense.

Xavier’s athleticism translates into one of their biggest strengths as a team: rebounding. The Musketeers rebound it very well on both ends of the floor; they are 22nd in the country in total rebounds per game. More specifically, they are top 40 in the country in offensive rebounds per game — with double digit offensive boards in 17 of 24. The Bulldogs haven’t done a great job with defensive rebounding in conference play. In eight of their 11 Big East games, Butler opponents have pulled down nine or more offensive boards.

In Big East play, Xavier has the second-best offensive rebound percentage, grabbing an offensive board on 32% of their misses against conference opponents.

In Xavier’s best win of the season at No. 10 Seton Hall, the Musketeers outrebounded the Pirates by 29 rebounds, more than doubling Seton Hall’s 22 rebounds with 51 boards. They pulled down 14 offensive rebounds and 37 on the defensive glass. The result? An 18-point advantage in the second-chance points category and an unexpected win inside the Prudential Center.

The point is, the Musketeers have gone on the road in conference play and won a game against a top 25 opponent, very similar to the position they’ll be in on Wednesday inside Hinkle Fieldhouse. It’s not only important for the Bulldogs to play good defense and force Xavier into tough jump shots, but also to finish off those possessions with defensive rebounds.