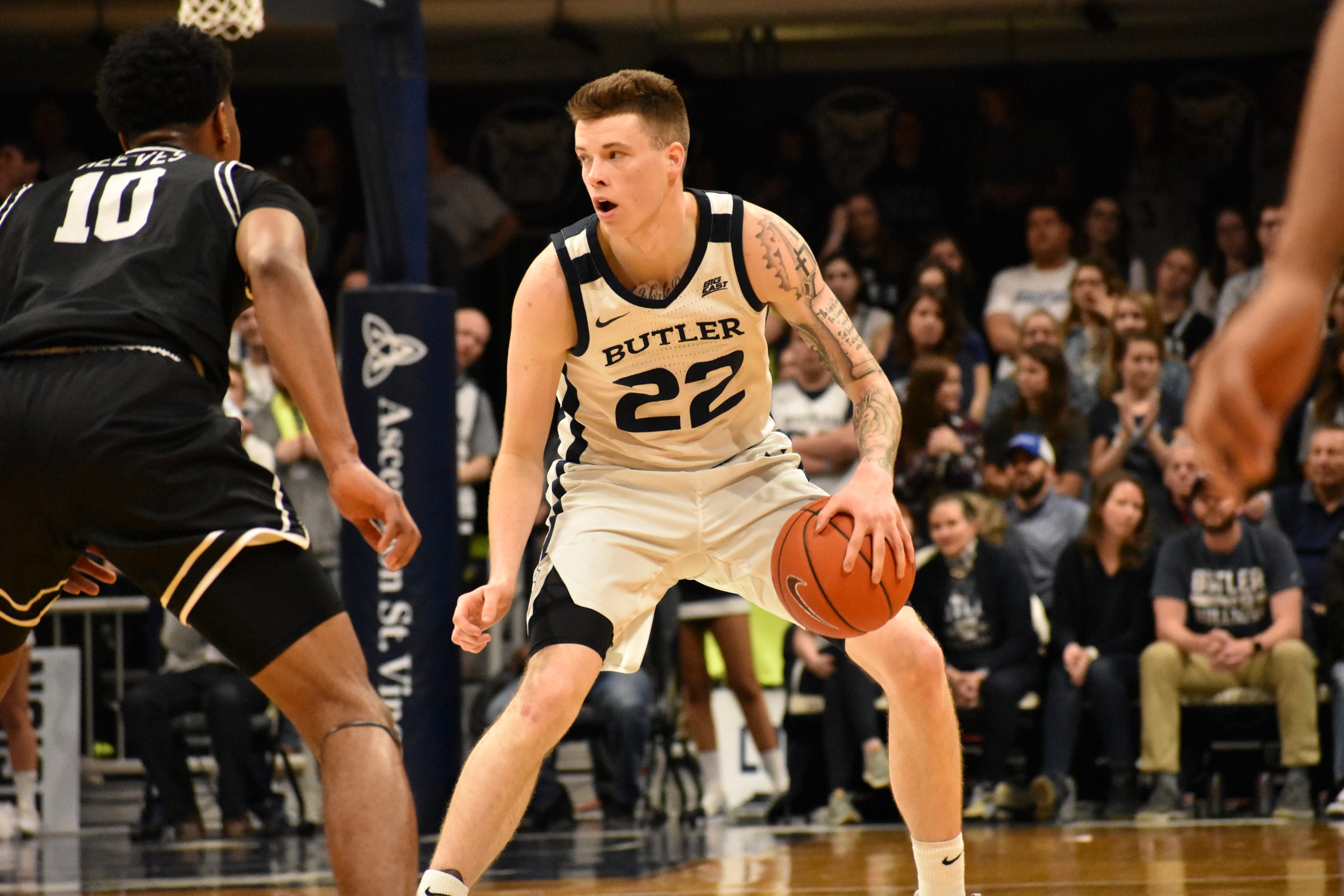 Sean McDermott dribbles the ball during a game this season. McDermott was held scoreless against the Golden Eagles. Photo by Donald Crocker / Collegian file photo.

The Butler men’s basketball team had a chance to slide into a three-way tie for second in the Big East with a win at Marquette on Feb. 9. Instead, the Golden Eagles are in that position after defeating the Bulldogs 76-57.

It looked like the two teams were going to be locked into an offensive explosion after the first 10 minutes. With 9:05 left in the first half, the score was 23-21 and both teams were shooting better than 50% from the floor. The Bulldogs scored just five more points in the half and didn’t look very good on offense for the rest of the game.

Bryce Nze and Kamar Baldwin led the charge offensively. They combined for 37 points on 16-of-25 shooting. Baldwin turned in another elite second-half performance but it wasn’t nearly enough this time around. The rest of Butler’s team was just 7-of-35 from the field. We’ll get to the rest of Butler’s offensive struggles today on the road in a moment.

There were no incredible performances from the players, but a handful of really solid ones. Nobody had more than 20 points, but five different Golden Eagles had eight points or more. Markus Howard and Sacar Anim didn’t have spectacular games but the production was there elsewhere. The Golden Eagles shot 28 free throws to Butler’s eight.

The Bulldogs could be 7-4 in conference and in a tie for second, instead, they are 6-5 after a 19-point loss. Let’s go beyond the box score.

1. Butler just wasn’t good enough on offense in this one.

The Bulldogs offense fell short in several categories today and after the first 10 minutes, didn’t make enough shots to hang with Marquette’s balanced attack on this particular day. Nze and Baldwin combined for 37 points on 16-of-25 shooting but the production from elsewhere was virtually non-existent.

Sean McDermott took just two shots in the first half and the first one didn’t come until there was under two minutes remaining in the period. He took just five shots in the game and was 0-of-3 from beyond the arc. No other Butler player had more than seven points and the two players that reached seven — Jordan Tucker and Bryce Golden — were a combined 6-of-23 from the floor.

The Bulldogs scored 30 points inside the paint, but had no other level of offense to go with it. Butler was just 4-of-20 from beyond the arc, three of them coming from Baldwin, and the Bulldogs took just eight free throws in the entire game. They didn’t get to the line, they didn’t shoot it well and all-in-all didn’t make enough shots to win a Big East road game. The offense was very one dimensional and the production came from very few places.

2. Sean McDermott, either everything or nothing.

In the past couple weeks, McDermott has been either everything for Butler on offense or almost nothing. Against Marquette the first time around, he had 16 points on 63% shooting and turned in 21 and 25-point efforts against Georgetown and Villanova. The issue is that in between those games he had a 1-of-11 game at Villanova and a 2-of-5 performance in Butler’s loss at home to Providence a week ago.

McDermott and the Butler coaching staff have to find a way for McDermott to impact the game offensively even when he isn’t shooting it well. In games that McDermott has less than two field goals in conference play, the Bulldogs are 1-3 with the lone win coming against Providence.

To be fair, McDermott has been good for large portions of the season and has had big performances in big games. But he has become too big a piece of this offense to disappear completely like he did against the Golden Eagles. When teams have effective gameplans for the sharpshooter, the Bulldogs have struggled to find ways to keep him involved and productive especially on the road.

3. Butler’s defense wasn’t bad, but Marquette got production from a lot of different places.

Sacar Anim and Markus Howard have been Marquette’s best offensive players in Big East play. Neither had phenomenal games — Howard still finished with 17 despite just 4-of-11 from the field — but other Marquette players picked up the slack.

Kobe McEwen and Brendan Bailey combined for 32 points on 11-of-19 shooting to provide a spark and makeup for Anim’s less than stellar day on the offensive end. Bailey had scored in double figures just once in the last seven games and McEwen continued his streak of four straight games of scoring in double figures.

The Golden Eagles are always going to get production from Howard. Today wasn’t his worst day, but it certainly wasn’t his best and he still walked away with 17. Marquette gets much tougher to beat when they get contributions from their role players. Today, they get that contribution in a big way. Combine that with 21 points from the foul line and Butler’s offensive struggles and it’s easy to see why the home team ultimately ran away with a 19-point victory — Butler’s worst loss of the season.

With the loss, Butler fell to 21st at KenPom. The ranking is their lowest in that metric since Nov. 25 prior to their win over Missouri in the Hall of Fame Classic. They are now outside of the top 25 in both offensive and defensive efficiency.