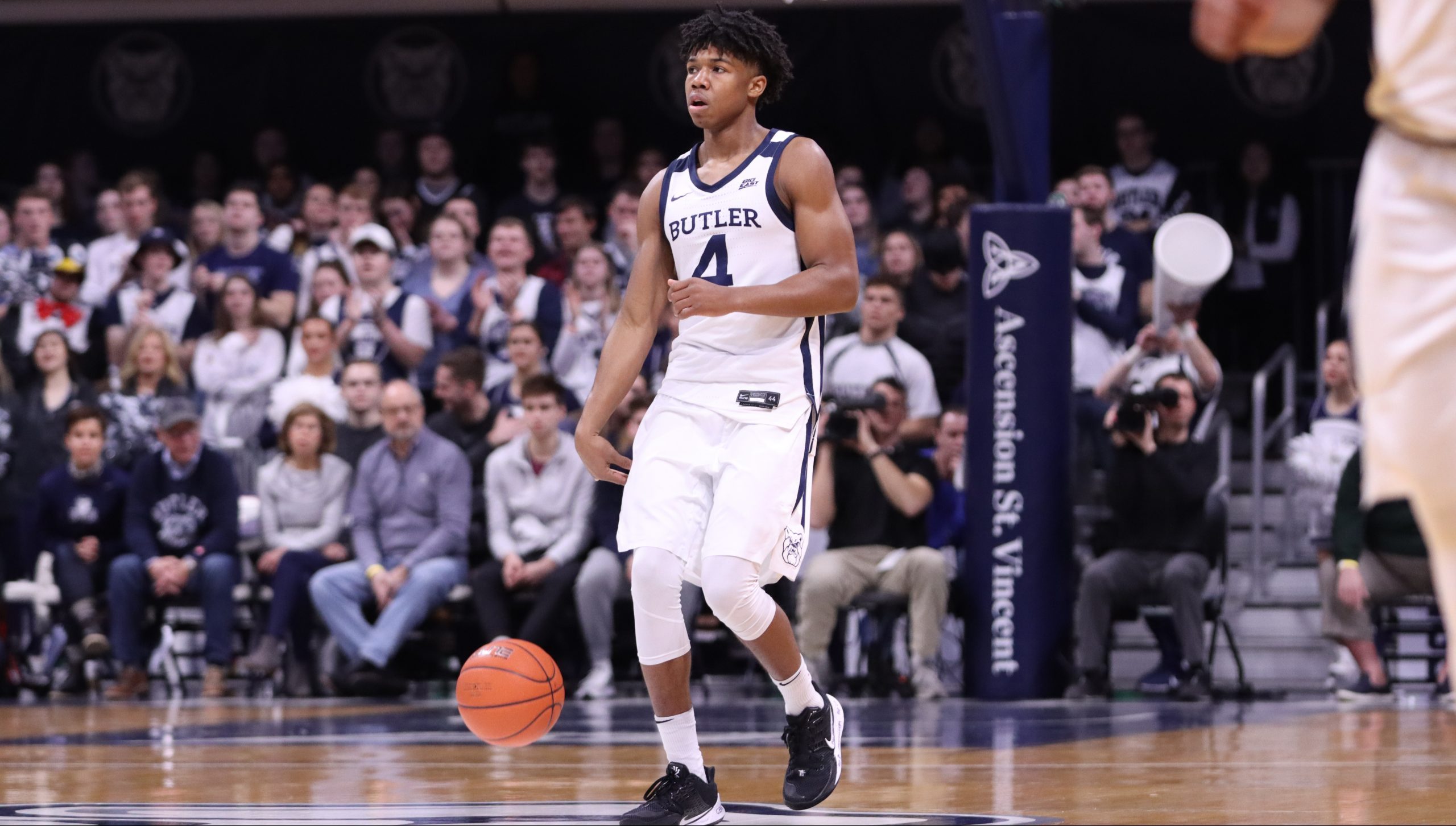 Khalif Battle dribbles the ball up the court against Georgetown on Feb. 15. Battle finished with eight points in the loss. Photo by Chandler Hart.

For the fourth time in four years, the Georgetown Hoyas came into Hinkle Fieldhouse and left with a victory. The Hoyas beat the Butler men’s basketball team by a score of 73-66 powered by four players in double figures and a career-high 22 points for Terrell Allen.

The Bulldogs had three players in double figures. Sean McDermott, Kamar Baldwin and Jordan Tucker each finished with more than 10 points but nobody shot better than 41% from the floor — a microcosm for Butler’s offense that was 41% as a team.

On the other side of the ball, Georgetown shot 52% from the field and an incredible 10-of-15 from beyond the arc. Coming into this game, the Hoyas were shooting just 32% from beyond the arc in Big East play. Part of that was due to Georgetown’s ability to knock down tough shots, but it was not Butler’s best performance on the defensive end.

The Bulldogs are now 19-7 overall and 7-6 in Big East play. The loss moves Butler deeper into the middle of the conference now sitting alone in fifth and 3.5 games back of Seton Hall. We go beyond the box score.

1. Georgetown made up for the absence of Omer Yurtseven and Mac McClung.

Coming into this game, both Mac McClung and Omer Yurtseven, the Hoyas’ leading scorers, were questionable. It was clear early on that McClung wouldn’t play and Yurtseven was declared inactive right before tipoff. Georgetown needed to do something to make up for the 33 points per game that were unaccounted for and they did just that.

As a team, the Hoyas shot 52% from the field including an incredible 58% against a half court defense like Butler’s. They were even better from beyond the arc, knocking down 10 of the 15 3-pointers they took. Some of them were contested and they just knocked down shots but the Bulldogs weren’t great in the half court defensively like they have been all year.

More specifically, the Hoyas had four players averaging less than 10 points per game step up and finish in double digits. Terrell Allen has been trending in the right direction the last couple of weeks, scoring in double figures each of his last three games coming into today. The graduate transfer scored 22 points on 9-of-14 shooting in what head coach Patrick Ewing called the best game he had seen Allen play.

Behind Allen, Jahvon Blair and Jamorko Pickett combined for 28 points and 10 rebounds. Qudus Wahab finished with 11 points and seven rebounds; the freshman played his most minutes of the season and came up big in Yurtseven’s absence.

The Hoyas needed production to make up for injured players, and they got it.

We won’t spend a lot of time talking about how important Aaron Thompson is to Butler. I’ve beat that point to death. It remains true and it was evident again today. But more specifically, no one stepped up for Butler to make up for Thompson’s impact for more than a handful of minutes and Derrik Smits’ absence was felt when it came to depth on the interior.

Baldwin, Tucker and McDermott combined for 45 points. It wasn’t the most productive 45 points of all time but production nonetheless. The rest of Butler’s team combined for just 21 points on 8-of-17 shooting. Nze and Golden didn’t have great games, Golden, in particular, was in foul trouble for most of the contest and only played seven minutes.

All this adds up to Khalif Battle and John-Michael Mulloy playing meaningful minutes for Butler. To be fair, Battle played with confidence and knocked down the first two 3-pointers he took in about four minutes. But he made just one basket in the next 12 minutes he was on the floor and finished with eight points. Mulloy — who still isn’t ready to play substantial minutes — had zero points and committed three fouls.

Head coach LaVall Jordan did have good things to say about his young players who were asked to step up.

“I was proud of [Khalif] and John-Michael, our two young guys came in and gave us a spark especially in the first half there,” Jordan said. “Their preparation was proper, they were prepared for it.”

Battle, specifically, provided a spark as he has at times this season, but the production wasn’t quite enough.

3. The 3-point line is the ultimate equalizer in college basketball.

The Hoyas do not shoot the three very well — in conference play or overall — but they couldn’t miss today. In the half court, where Butler’s defense is best, the Hoyas knocked down a number of tough 3-point shots and that was a big reason why the Bulldogs were never able to overtake Georgetown in the second half. The Hoyas hadn’t shot like that at all this season, and they probably won’t shoot like that again. As an aside, Butler opponents are shooting 36.7% against them in conference play, worst in the Big East.

On the flip side, the Bulldogs were going up against the worst 3-point defensive team in the Big East coming into today. Early on, the Bulldogs’ movement was good and each of the first seven three points shots Butler took were clean, borderline wide open.

They only made one of them.

The Bulldogs weren’t able to fix the problem throughout the rest of the game finishing 9-of-23 from beyond the arc. Tucker and McDermott were a combined 6-of-20 from deep while Battle and Baldwin each shot 33%.

The Bulldogs got good looks — better than the ones Georgetown got — but they were unable to knock down the good looks they got which just can’t happen when missing a floor general like Thompson. The open shots aren’t going to come as frequently and Butler didn’t knock down nearly enough of the ones they got today.

Kamar Baldwin and the rest of the senior class are 3-1 against Villanova — who are 112-24 since Baldwin enrolled at Butler — inside Hinkle Fieldhouse. Meanwhile, the Hoyas, who are 63-57 in the same time span, are 4-0 inside Hinkle since the beginning of the 2016-17 season.