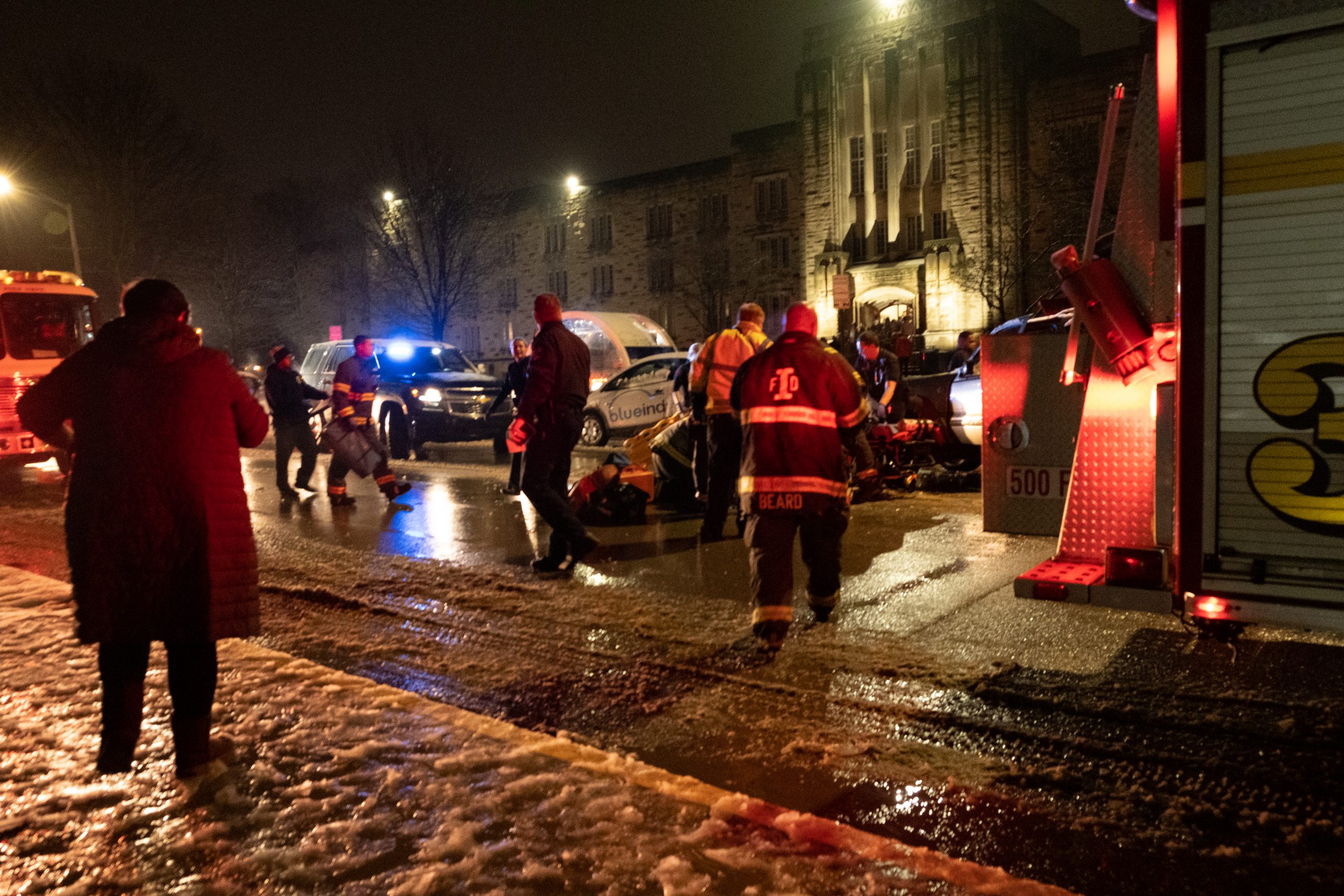 Emergency services responded to the accident on Feb. 12. Photo by Julian Cirnigliaro.

Around 9:20 p.m. on Feb. 12, a Butler student was struck by a car while crossing West Hampton Drive. BUPD and emergency services were on the scene, and BUPD officer Robert Cook said the student was conscious when they were taken to the hospital.

Dean of students Sally Click, who was on the scene last night, said she was impressed by the collaborative response from BUPD and the Community Assistance staff. The CA staff especially, she said, helped to contain the students and treat emotional responses of those who witnessed the accident or the aftermath of it.

“I am really happy to have such great colleagues,” Click said.

Click went to Eskenazi Hospital, where the student was taken. It is part of Butler University’s protocol to take care of a student in need of support, such as going to the hospital, in case there are no friends or family nearby. The student’s professors were also contacted to inform them of the situation so the student does not have to worry about classes.

As a parent of young adults, Click said she would have wanted the same for her children.

Frank Ross, vice president for Student Affairs, sent a campus-wide announcement at 11:30 a.m. stating they are relieved to learn that the student is at home with the family recuperating.

The student was discharged from the hospital around 3 a.m. on Feb. 13 and will hopefully return to school after the weekend, Ross said.

The email also provided information for the Counseling and Consultation Services, located in the HRC, for students who may need additional care after what they witnessed. Counseling Services is available at 317-940-9385.

Ross, Click and Anthony Rivera, assistant chief of operations, said the accident could be a traumatic experience for the student who got hit and the students who witnessed it — but also for the driver who struck the student.

According to BUPD, the student who was hit by a car was discharged from the hospital the morning of Feb. 13 and is at home, recovering.

Anthony Rivera, assistant chief of operations, said the fire alarm — which caused the evacuation — was pulled last night as a prank.

Rivera said there is no such thing as a “victimless crime.”

A fire alarm went off at ResCo around 9:15 p.m., and students are required to cross Hampton Drive towards Ross Hall during an evacuation. While evacuating, the student was hit by a gray Jeep.

Multimedia editor @JakeBedell87 on the scene with additional information about the accident. pic.twitter.com/xJlQFx5acx

Dean of students Sally Click went to the hospital to be with the student. Click said the university will release more information as it becomes available, and that now is a time to support students — especially those who witnessed the accident.

Click said Butler president James Danko and Frank Ross, vice president for Student Affairs, have been made aware of the situation. Hampton Drive was re-opened around 10 p.m.

The Butler Collegian will continue to follow this story as more information becomes available.