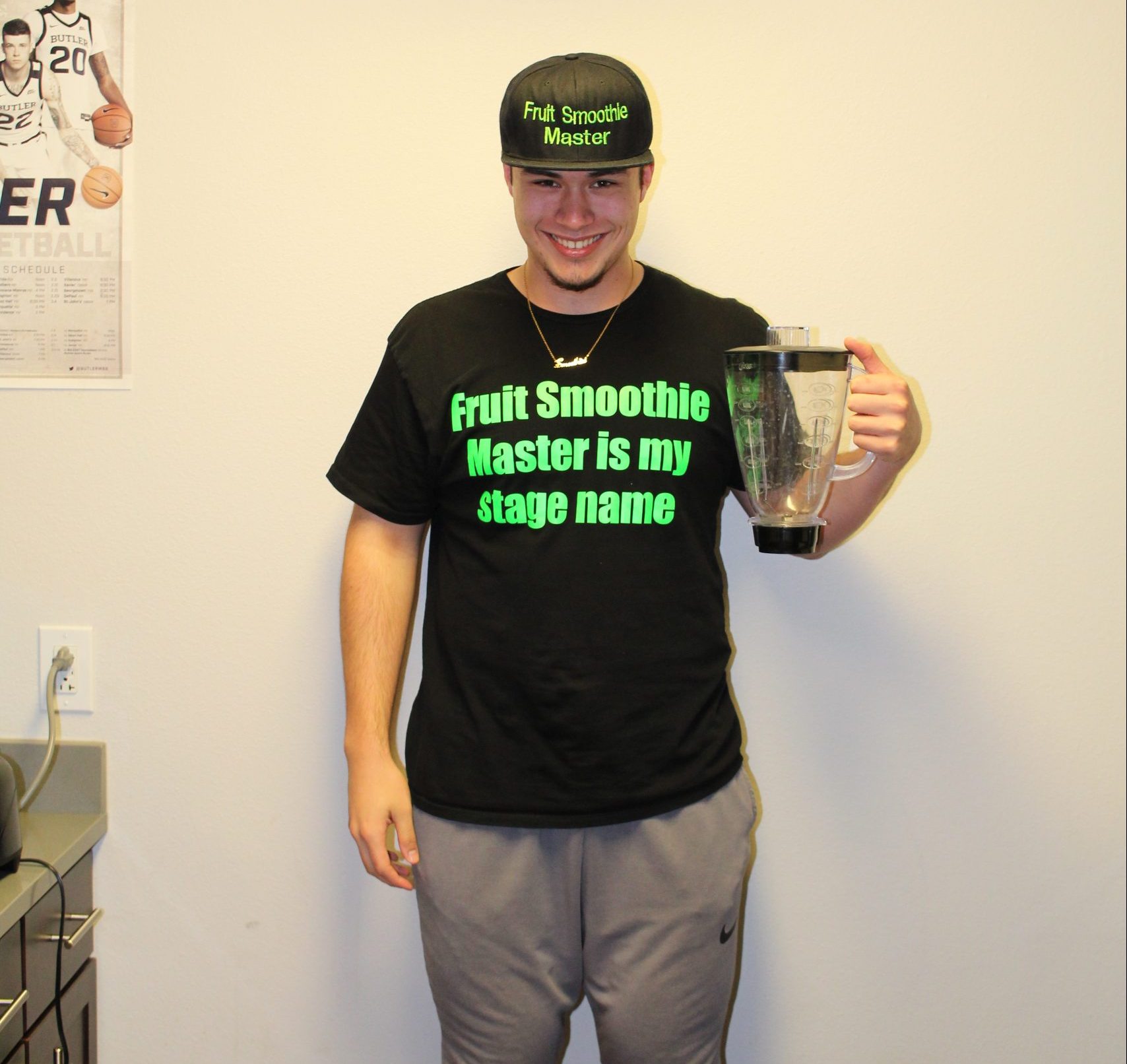 On a trip to Drake Bay, Costa Rica over spring break in 2016, Lucas Li tasted some of the best smoothies he had ever had. The smoothies were made daily by the owners of the hotel where Li and his father stayed during their trip. Li enjoyed the smoothies since they were made from fresh fruit and took inspiration from the hotel owners home with him.

The smoothies Li tried in Costa Rica remained the best smoothies he had tasted, until he perfected his own recipe around August 2016.

For months after returning from his trip, Li worked to recreate the thick, fruity smoothies he tasted while there. Through trial and error, Li finally ended up with what he considers to be the perfect smoothie making process.

“I decided that I loved [making smoothies] so much I thought, you know I’d make myself some sort of brand name,” Li said. “People were starting to call me Smoothie King but I’m like, ‘Ah, I don’t want to be called Smoothie King because they’re my competition,’ so that’s how I came up with the name Fruit Smoothie Master.”

Fruit Smoothie Master quickly became something more than a nickname, and Li has a shirt with that name for almost every occasion. Li can often be spotted on campus wearing his Fruit Smoothie merchandise. He has a dress shirt for RBE presentations, a few plain shirts with Fruit Smoothie Master written in green, his favorite color, and a customized Green Bay Packers shirt that allows Li to represent his team and brand.

One of Li’s favorite parts, aside from the taste, is being able to share his smoothies with people.

“Making [smoothies] for other people is the best part because I know what it tastes like personally,” Li said. “I’m giving others the opportunity to try my smoothies and it’s like a compliment to me when they try my smoothies.”

Li has been making smoothies since high school and continues making them at Butler with the $22 blender he purchased at Target his first year.

With his new blender and passion for smoothies, Li and his friend Sebastian Colsmen, a sophomore finance major, decided to start their own business, LuCo Smoothies.

Li had a number of goals for his business, which consisted of sharing his smoothies, making profit and constantly continuing to develop new flavors.

The business, however, was short lived. After operating for five weeks Li was told by his Residence Assistant that he had to stop selling smoothies.

Li was forced to stop selling smoothies since it was against the university policy on solicitation, and his products aren’t technically approved by the FDA.

The policy states: “Businesses, organizations and individuals are not allowed to sell, address students or solicit business on the Butler campus unless a recognized student organization is sponsoring the business, organization or individual for a specified period of time, location or event.”

Since Li no longer operates his smoothie business, he uses his Instagram account to stay connected with the community.

Li posts weekly polls on his Instagram story which allow followers to choose the ingredients he will be using in his Friday smoothies, and even offers special votes around the holidays. Holiday votes include seasonal items in the polls. During Christmas, Li added Christmas sweets to his smoothie polls, and in the fall he tried including pumpkin in his smoothies.

Li said one of the coolest people he has made smoothies for is sophomore marketing major Kendra Laidig because she has supported him since the beginning.

Laidig was one of the first people to try Li’s smoothies last year and said Li is what makes the smoothies special.

“He is just very, very consistent,” Laidig said. “He is so genuine, like if he meets you once he will remember you and your story.”

Over the years Li has gotten better at selecting fresh fruit for his smoothies. He typically goes to Meijer when they have sales and waits until the fruit is ripe before using it in smoothies. Li also uses the oranges, bananas and apples offered in Atherton Union to add to his smoothies.

Li said he is willing to try interesting smoothie combinations that his viewers vote on. One of the most unique combinations Li said he has tried was peanut butter with tropical fruits.

“I’m also the type to try weird flavors of other people’s taste,” Li said. “For example, like this pumpkin apple cinnamon one that I had in the fall. I thought it was pretty good, meanwhile my friends were pretty grossed out by it.”

Quintanilla is from California and is used to having access to fresh fruit, which was something he missed when coming to Butler. Quintanilla said that smoothies were something he was craving, and ones he has tried from Li reminded him of home.

“Out of any other smoothie I could have here in Indiana, Lucas’s smoothies are the most similar to California,” Quintanilla said.

While some of Li’s smoothie combinations could be considered outside the box, he makes a number of fruit based smoothies including a strawberry banana smoothie, which Li calls “a beginner smoothie.”

Li’s knowledge of smoothies is something he is willing to share. If you are wondering the best blender choice, looking for a new fruit combination, or just have a question about smoothies, Li is truly a master in the art of smoothie making.

Although his business did not last for very long Li learned a number of lessons about what it means to be an entrepreneur.

“I would say starting my own smoothie business, it made me discover my passions for entrepreneurship and marketing,” Li said. “I’m not majoring in either one of those, but last night at the career fair my biggest selling point was my smoothie business, which stood out to a lot of employers so I would say for like starting your own business in some way shape or form is like very good, ‘cause not only does it broaden your perspective, but it looks good on resumes.”

Li’s willingness to try new things and experiment with smoothies is a value that extends far beyond the blender.

“It’s always good to have an open mind about trying a new smoothie flavor,” Li said. “Because not only do you broaden your perspective, but you realize that you love something that you didn’t think you would love.”