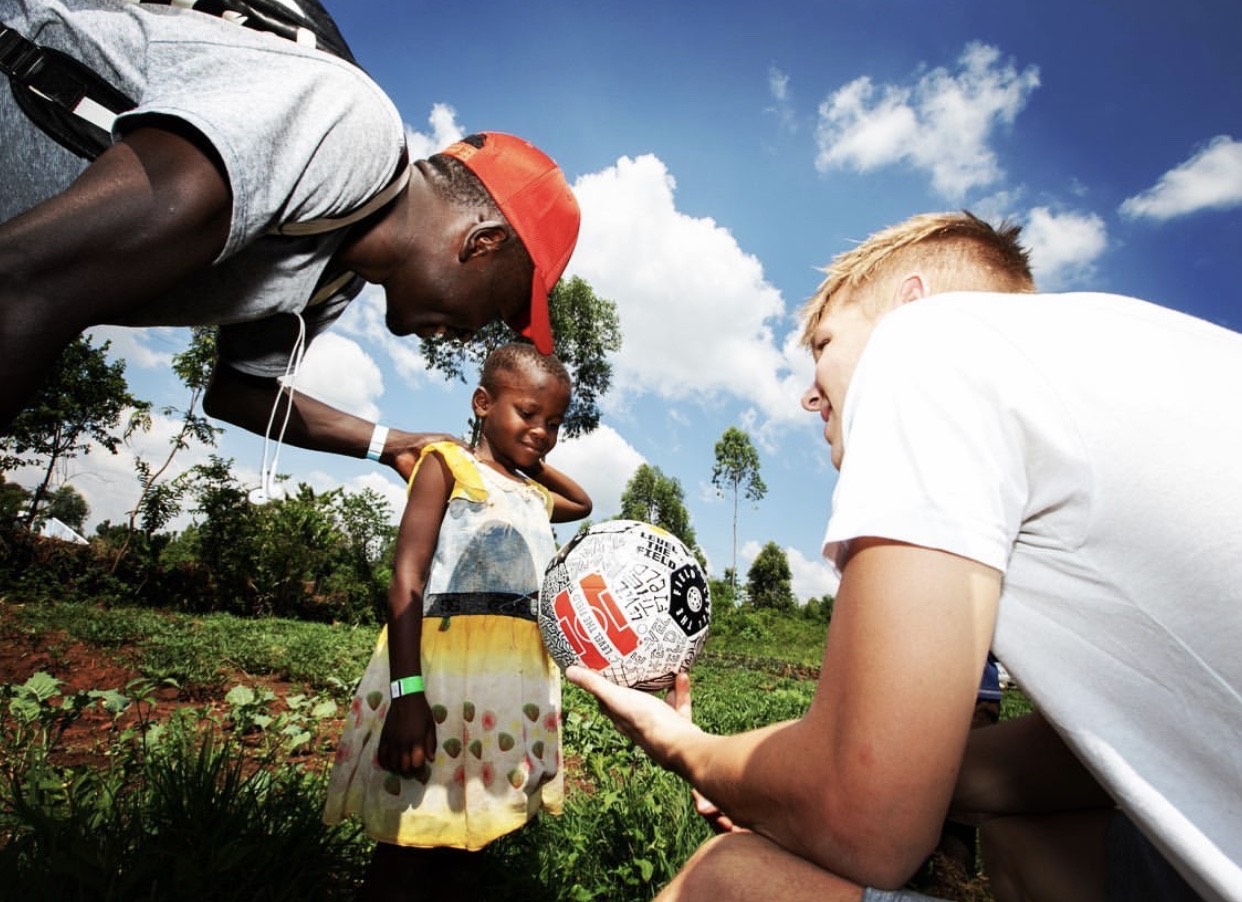 Ethan King hands a ball to a young child during a Charity Ball trip. Photo courtesy of Ethan King.

While most 10-year-olds are enjoying recess or practicing multiplication and division, Butler men’s soccer player Ethan King was founding his own organization — all because of a soccer ball.

King, a junior entrepreneurship and innovation major, was visiting Mozambique in Africa, with his father to help fix water wells in rural communities. He brought his soccer ball to play in the villages with other children.

“My dad and his team would be working and I would put my soccer ball down and start playing with a couple kids, and then two minutes later, there would be 50 kids just out of nowhere playing with me,” King said.

The joy on the children’s faces each time King would start playing with them resonated with him, and at the final stop during the trip he decided to give his ball away.

“I had a translator come over and help convey the message,” King said. “I said, ‘I know you guys love the game and you deserve a real soccer ball to play with.’ The kids started crying and gave me hugs and it was a super amazing moment. On the plane ride back home I just kept replaying that scene in my head of giving the ball away.”

The moment impacted him so much that King decided he wanted to do it again. And again. He came up with the name, Charity Ball, and with help from his family, stuck logos onto soccer balls and posters to spread the word.

“I thought the idea was pretty big for a 10-year-old kid,” Brian King, Ethan’s father, said. “He came face to face with extreme poverty and realized that what he had was way more than what these kids would ever begin to dream of.”

Ethan started calling local soccer shops and asked for donations to give to children for the next trip to Africa.

“Not everybody wanted to donate,” Ethan said. “I remember one place said they would pass and I got off the phone, shed a tear and was kind of heartbroken. But then my dad offered me some motivation and helped me navigate through all of the tough times.”

The organization continued to expand, and after a trip and donations of soccer balls to Kenya, there were reports about a year later that said the crime rate has decreased significantly because of time being invested into the soccer league and playing the sport.

“People underestimate the gift of a soccer ball and how powerful that can be for kids because soccer really is the world’s game,” Ethan said. “Maybe here in the U.S. it’s basketball or football, but when you go to these communities, all of the kids know soccer.”

This past year, King has looked to expand the women’s game. The initiative, called “Level the Field,” aims to increase equity and help ensure girls receive the same opportunities regarding soccer. This was the concentration during his last trip to Africa during the 2019 winter break.

“We had invested in the first ever girls tournament for the community of Rongo in Kenya,” Ethan said. “Never before has there been a tournament in that community for girls. People we interviewed in the village had amazing things to say and how this is groundbreaking for them historically.”

So what does the future of Charity Ball hold? Right now, the organization is looking forward to the completion of a new soccer park in Kenya. The park will feature a new water well where players can get cleaner drinking water, and it will also have places where kids can go to relax or study.

“I would just really love for Charity Ball to be one of those household organizations that the professional community of sports turns to,” Ethan said. “We need to continue to invest in the future generations of kids in developing nations.”

King’s family will continue to support their son and the organization he built at such a young age.

“He’s got a lot of different dreams of what he could do next,” Brian said. “We will continue to support him however we can assist. There are a lot of opportunities out there.”

Just like every other college student, King is wrestling with his future plans after graduation. He was unsure about the future of Charity Ball when entering college; however, every time he takes a trip, he is reminded of how powerful the mission is and inspired he is to keep it going.

“When I get to school I get caught up in my own agenda with sports or homework, but when I go on those trips and I come face to face with the problems people are experiencing, I just realize how much bigger life is and what’s really important,” Ethan said.

While his future is not set in stone, King said his experiences allow him to be sure about one thing:

“Every time I come back, that’s just extra motivation for me to keep going and I think I always want to be part of this organization.”

People can contribute to Charity Ball on their website.