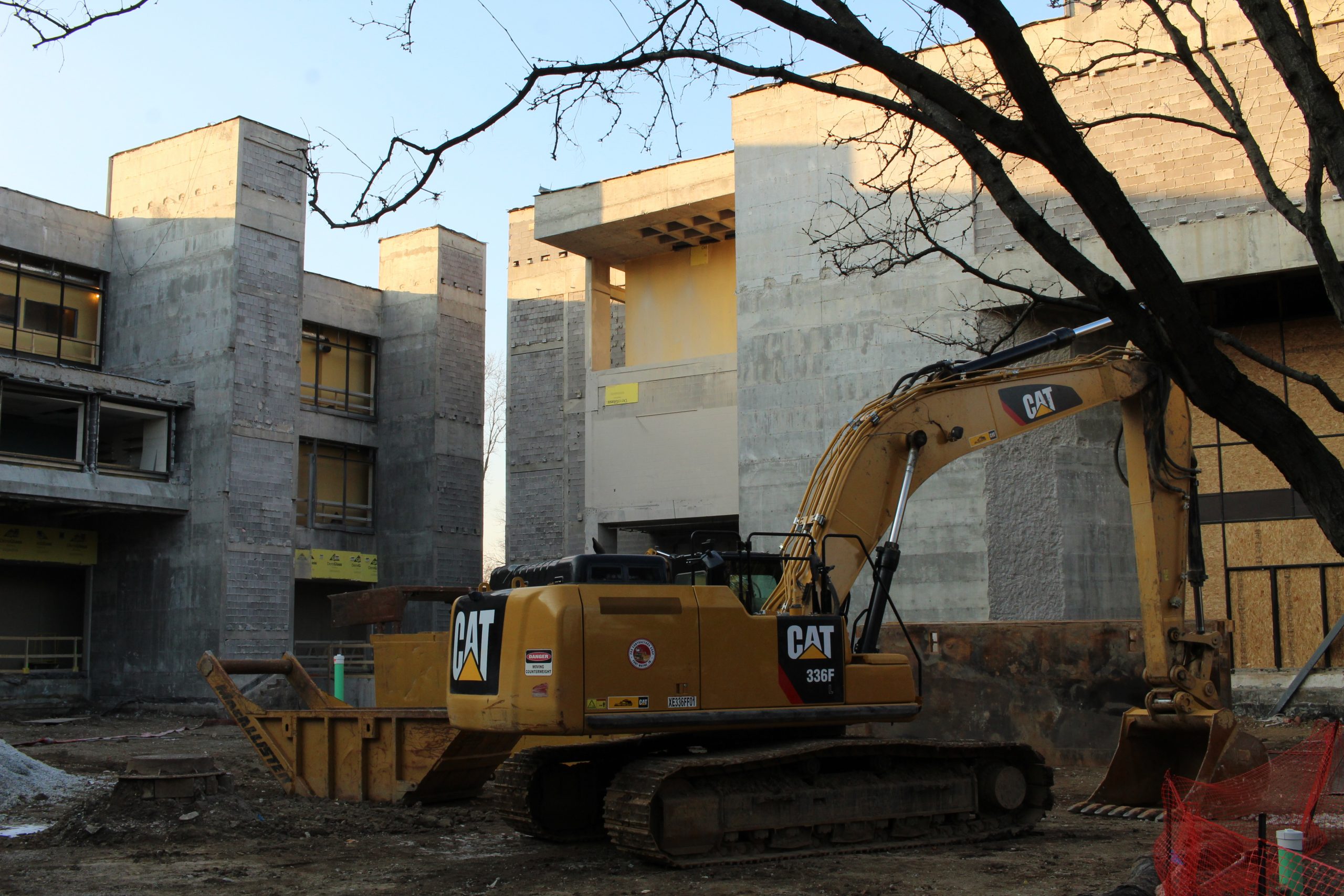 Butler’s Board of Trustees approved plans to renovate and expand the university’s science facilities during the Summer of 2019. The new building will include new classrooms, labs and collaborative workspaces.

With an expected price tag of $100 million dollars, the 36-month long project is Butler’s largest investment ever. Todd Buerger, a project manager with the school’s operations department, said the rest of the project has now been bought out on budget.

The project is moving ahead on schedule as faculty and students are beginning to get a glimpse at what it is like to have classes in classrooms so close to ongoing construction.

Professor Philip Villani is the biology department chair and teaches a class in Gallahue Hall this semester. Villani said it was challenging to teach a class so close to the construction when work was being done to remove limestone on the outside of the building.

“That was kind of tough because there was a lot of hammering going on and it was a little disruptive, but we’re keeping the end in sight,” Villani said. “A lot of it is just, we have to deal with it because in the end we are going to get a new building, so it makes it worth it.”

Much of the other work being done right now is utility work, which will provide the new infrastructure necessary for the addition and renovation. One part of this new infrastructure is an underground water line that will run along the east side of Gallahue.

Students and staff may have noticed the additional fencing that was put in place so this line could be installed. The fencing cuts across the academic quad all the way to Jordan Hall, the building which many students and faculty now pass through to access Gallahue.

Buerger said this fencing was an anticipated part of the construction plan and it is expected to be up until about six weeks from Feb. 12, at which point the sidewalks will open again.

Villani said he was not aware of the plan to put the fencing up until it was already in place. However, he said the overall project has been well planned out with professors far in advance of much of the work that will be done.

One aspect of the project that required careful planning with professors is the moving of classes and labs that will happen as the construction shifts between different phases. Phase one will include the addition that will connect Gallahue and the Holcomb Building; phase two includes the renovation of the Holcomb Building.

When the work on the Holcomb Building and the addition is completed, classes and labs — which would normally be housed in the north half of Gallahue — will be moved to this newly completed section. This will allow for renovations of Gallahue to begin, which will constitute the third and final phase of the project.

Work will begin on the north side of Holcomb, where it will continue for about nine months. Finally, classes and labs located in the south half of Gallahue will be moved to the north side of the building until the rest of the construction is complete.

Villani said this has been planned out carefully by an architect with the help of professors from each department well in advance of any of the actual moving.

“There will be aches and pains in the whole process, but it’s not that it won’t be organized and planned out well,” Villani said.

Luke Renchik, a junior economics and sports media production major, saw the investment in research as a positive move for Butler’s future.

“I think the strategic vision and investment into science is very cool and positive for Butler,” Renchik said.

In addition to providing more classrooms with updated technology, the new construction and renovations will provide spaces for collaboration. One of the main areas where this will be evident is in the research lab spaces.

Currently, many professors have their own individual labs where they work alongside students on research projects. Labs in the new building will be bigger to allow multiple faculty members to work in the same lab. This design is intended to match facilities of industry leaders, like Eli Lilly and Roche, and is expected to encourage collaboration.

“It will allow students to work together more,” Villani said. “My students who are working in my lab, they’re going to be working right next to other students in other labs and it will just foster a better sense of community and maybe more collaboration.”