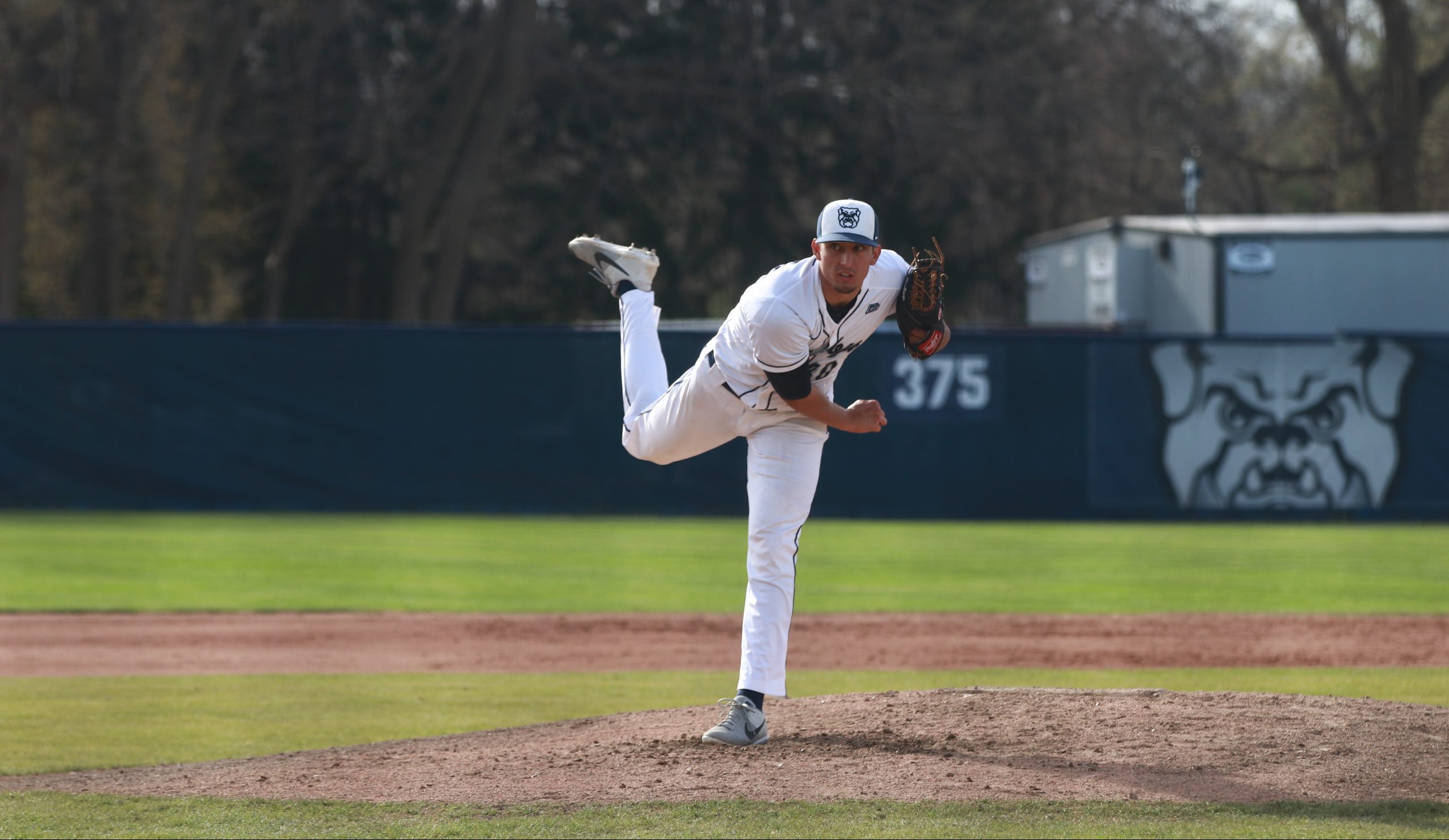 Connor Schultz fires in a pitch in a game last season. The Bulldogs start their season on Feb. 14. Collegian file photo.

Following a 26-26 season in 2019, the Butler baseball team is looking to return to the Big East tournament.

The Bulldogs finished sixth in the conference last year with a 6-11 Big East mark. In this year’s preseason coaches poll, Butler was picked to finish fifth.

During head coach Dave Schrage’s three-year tenure at Butler, the Bulldogs have not had a losing season.

But they’ve set their expectations much higher than just that. Here are a few key factors for the team as it looks to improve upon last year’s campaign despite key losses:

Last season, the Bulldogs struggled to finish strong at the end of games. Schrage made this a  focal point for the team to improve on during the offseason.

“That’s what we worked on in the fall,” Schrage said. “A lot of putting guys in situations where we had to finish games when we had to compete. Controlled scrimmages where, OK, you’re up one run, it’s the ninth inning. You’re up two runs it’s the eighth inning. Then play a two-inning scrimmage.”

Out of their 26 losses, 11 were lost after they were tied or had the lead heading into the seventh inning.

Butler will have to get both their bats and bullpen going towards the end of the game if they hope to win a conference championship for the first time in 20 years.

New guys stepping up to the plate

Ahead of the season, Butler filled out the coaching staff with Matt Kennedy and Jake Ratz. Both of them have seen success in baseball before finding their way to Indianapolis.

While coaching at Parkland Community College, Kennedy made two back-to-back trips to the NJCAA Division II Baseball World Series and won once in 2009.

Ratz played for Schrage when South Dakota State won the Summit League Conference tournament and competed in the NCAA Baseball regionals in 2013.

“Both of them have come in with a ‘I want to win mentality’,” redshirt junior catcher Duncan Hewitt said. “They come from winning programs. They were players and they won. So, they’re feeding off of us and I feel like we’re working really well together.”

Additional losses for the Bulldogs included the departures of Ryan Pepiot and Harrison Freed via the MLB Draft this past summer.

Pepiot became the highest draft pick in Butler history after the Los Angeles Dodgers selected him up in the third round. He broke the record for most career strikeouts, 306, and strikeouts, 126, in a season at Butler.

Junior Connor Schultz is expected to step up to replace Pepiot and give the Bulldogs a consistent starter on Fridays, when a team’s ace typically gets the start.

Schultz was selected as Big East Preseason Pitcher of the Year. He ended last year with a 6-1 record and a 2.29 ERA.

“He’s gonna go deep into games every Friday,” junior right-hander Jack Myers said. “Give us a shot to win. We know that. Bullpen’s got his back. I think it’s gonna be a good year for him for sure.”

Myers, who led the Bulldogs with three saves in 2019, will leave the bullpen to start at the number two spot in the starting rotation.

The San Francisco Giants drafted Freed in the 13th round. He finished his Butler career with a bang by leading the Big East in slugging percentage, RBIs, home runs and hits.

Hewitt could serve as a main offensive contributor after hitting an impressive .333 in 45 at-bats across 15 games last season. With catchers Zach Parker and Sam Russo graduating from Butler last year, Hewitt will assume the starting role behind the plate.

Between Pepiot and Freed, Butler has some pretty big shoes to fill. Hewitt said they have exactly what it takes to fill them.

“We have the pitching staff to keep up with anybody,” Hewitt said. “We have an offense one through nine that can compete with anybody. So to win games, we’re just going to have to keep a level head every single day. In the past, we’ve kind of been an up and down team. You can’t dwell on the past. If this team just stays in the present where our feet are, plays day to day and just goes out there with the mindset that we can beat anybody that’s across the diamond from us, we’re going to win a ton of games.”

The Bulldogs will travel down to Lexington, South Carolina to start their season against North Carolina A&T on Friday.

Butler will start conference play against Georgetown April 3. The Hoyas ended last year 5th in the Big East with a conference record of 7-11.

The Bulldogs will face off against in-state rival Indiana University in Bloomington on Feb. 26.

“It’s the best time of the year because now you’re done facing each other…It’s really exciting to compete against someone else knowing everyone on your team is rooting for you,” junior outfielder Robbie McCargar said. “We expect to go down there, like we have every year, and do incredibly well and have that build to establish our season.”

Hewitt, who is entering his fourth year as a member of Butler baseball, has never been a part of a team like this before.

“I think personally, this is the best culture, this is the best chemistry we’ve had…I’d say our identity right now is that we’re here to win,” Hewitt said. “In the past, we’ve been the little brother to some teams. We kind of show up and you see the bigger names of these schools and they kind of look down on us. But, we’re really tired of that. I’d say our identity is that we got a lot more swagger to us and we’re ready to go.”