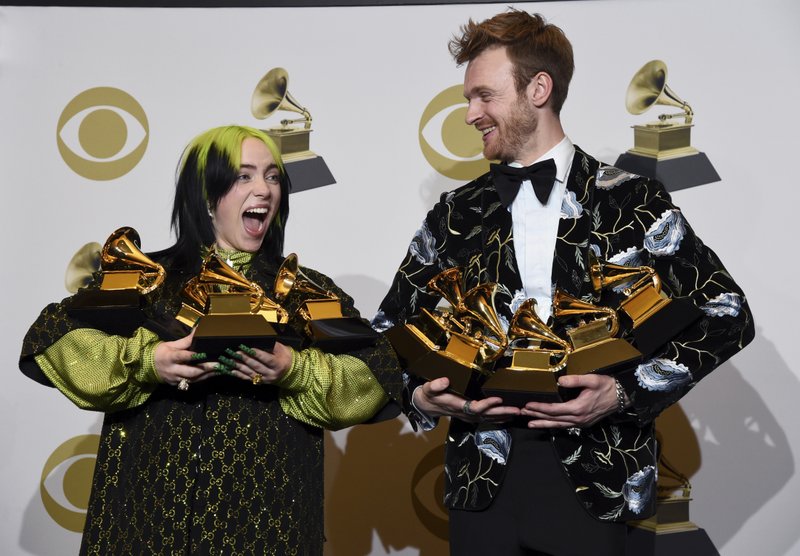 Billie Eilish Pirate Baird O’Connell, more commonly known as simply Billie Eilish, made history on Sunday after winning big at the Grammy Awards. She became the youngest person to win some of the Grammy’s top awards: record, song of the year, album of the year and best new artist. Furthermore, she’s the first artist to sweep all four categories since Christopher Cross in 1981, making her the first woman to do so.

At 18 years old, Eilish has accomplished a lot since her 2016 song “Ocean Eyes” put her on the map. She has 13 platinum and four gold singles in the U.S. as of January 2020. Her accolades include five Grammy Awards, two American Music Awards, two Guinness World Records and three MTV Video Music Awards.

However, she did not do it alone. Finneas O’Connell, Eilish’s brother, co-wrote, produced and engineered “WHEN WE ALL FALL ASLEEP, WHERE DO WE GO?,” and walked away as Sunday’s top winner with six awards for his work on the album.

Eilish’s work is credited for giving voice to young people who have complex thoughts, suffer from mental illnesses or contemplate suicide in the 21st century. The content of her music and music videos cover topics that reflect on modern and personal trials and tribulations.

Students on Butler’s campus resonate with Eilish and what she has done for the music industry. Her avant-garde take on pop music has separated her from other pop icons, such as Ariana Grande.

Morgan Skeries, a senior journalism and strategic communication major, is proud of Eilish because “she’s different and she embraces being different.”

“Her and Finneas were able to create something so touching and heartfelt,” Skeries said. “It came from a dark place, but such an honest place. ‘bury a friend’ was one of my favorites. I feel like she talks about things that female artists don’t always talk about, including her inner demons. That song to me I think, lyrically, is genius.”

Eilish’s debut album, released in March 2019, was highly anticipated by her rapidly growing fan base. “WHEN WE ALL FALL ASLEEP, WHERE DO WE GO?” features songs that range from slow, swooning melodies to fast, electronica beats amplified by synthesizers.

“Her range on the album is what set it apart — she covered a lot of themes,” Skeries said. “I think it has risen the standards regarding lyrics and album production.”

Artists like Lana Del Rey and Ariana Grande were projected to be big winners due to the release of their 2019 albums, “Norman F*cking Rockwell!” and “Thank U, Next,” respectively. Ultimately it was Eilish who swept the major categories.

“I love Lana and what she does, but she ain’t Billie,” Skeries said.

Marissa Glantz, a senior strategic communication and digital media production double major, has been following Eilish since the start of her career.

“It’s cool to see someone so young and talented win big like this,” Glantz said. “I like that she doesn’t follow anyone else’s rules and paves her own path. She also stays pretty humble about things, and I feel like a lot of celebrities let that kind of mass success get to their heads.”

Glantz believes Eilish’s accomplishments in the past year can be traced back to the novelty of her sound and style.

“It’s a whole new sound and feeling, and I think that’s what the music industry was lacking,” Glantz said. “She came in and kinda flipped all those rules around and made what she loved. I think the response shows it’s a good change in the music industry. And also she’s cool as f—.”

Zach Falch, a junior strategic communication major, has been hooked on Eilish since “Ocean Eyes,” and has continued to follow her journey into becoming one of the world’s biggest artists to date.

“I think her biggest impact on the industry is uniqueness and doing whatever you want, however you want it,” Falch said. “She represents a generation emerging in an overly digitalized world where the majority of the population interprets who you are through a screen and is not able to really grasp who you are. Billie was able to personify herself through her music and media for a generation that is just as lost and confused as Billie is in some of her songs.”

With her latest release being her single “everything i wanted,” Eilish is showing no signs of slowing down.

“Her first album was so successful and she has shown so much promise with all of her live performances; I don’t see how she won’t continue to be successful,” Falch said. “I’m excited to see what the future holds for her.”

Vanity Fair has done the same interview with Eilish for the last three years. Each interview inquires about Eilish’s growth as an artist and transitioning into adulthood. Her music and personality is impacted by both factors and she reflects upon it in her latest interview.

“I genuinely did not think people would care, I can’t even stress it enough. I can’t believe people care so much about me,” Eilish said in her latest interview.

Her impact on mainstream media, pop culture and everyday people is accredited to the fact that her brand and image juxtapose much of her musical choices. Her gentle voice yet complex music, humble personality and daring fashion has defined her last four years and rightly continue to move her forward.