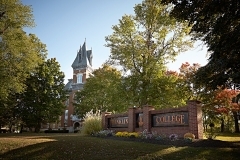 Franklin College, a small liberal arts college about 20 miles south of downtown Indianapolis, has mostly managed to avoid national headlines over the course of its almost 200-year history. That changed on Jan. 13 when it was announced that the school’s president, Thomas Minar, would be fired after he was arrested on suspicion of sex crimes involving a child.

According to Wisconsin Circuit Court records, Minar was charged with one count of child enticement-sexual contact, two counts of the use of a computer to facilitate a child sex crime and three counts of exposing a child to harmful material. Each of these charges is a felony.

Under the name “Top4yngr4fun,” Minar had been messaging with an individual he believed to be a 15-year-old boy on the dating app Grindr. The individual’s profile was originally advertised as a 19-year-old man with no pictures. However, when the individual said they were actually 15, Minar continued to message with them in a sexually explicit manner.

Minar and the individual, who was actually an undercover police officer, made plans to meet up at a McDonalds in Wisconsin where Minar was ultimately arrested.

Sam Weiderhaft, a senior sports media major at Butler and play-by-play announcer for Franklin College football, first learned about the news on Twitter.

“I was shocked by it because my experience with Franklin over the last two years has been fantastic,” Weiderhaft said.

A statement provided to the Collegian from Franklin College mirrors this shock, while also looking at how the school will move forward.

“As in other times of difficulty during the college’s 186-year history, our community will come together in support of one another as we continue to educate the innovative leaders of our future,” the statement said in part.

Morgan Rogusta, a junior finance major at Butler, saw addressing the situation head-on as the best way to deal with it.

“Facing the issue rather than ignoring it is how they’re going to get past it,” Rogusta said.

Weiderhaft said he has already seen members of the Franklin rallying behind the new interim president, Kerry Prather, who previously served as the university’s athletic director.

“It’s a tough time for them, but I have faith that they can get through this,” Weiderhaft said.

Since being arrested for these charges, Minar has since been released from jail by a $7,500 bond. The bond was paid by Minar’s husband on Jan. 7, about a week before he was fired from the college. Minar was released under the condition that he not have any unsupervised contact with minors or use any social media, including Facebook and Grindr.

Minar is due for an initial appearance before the circuit court on Jan. 27.