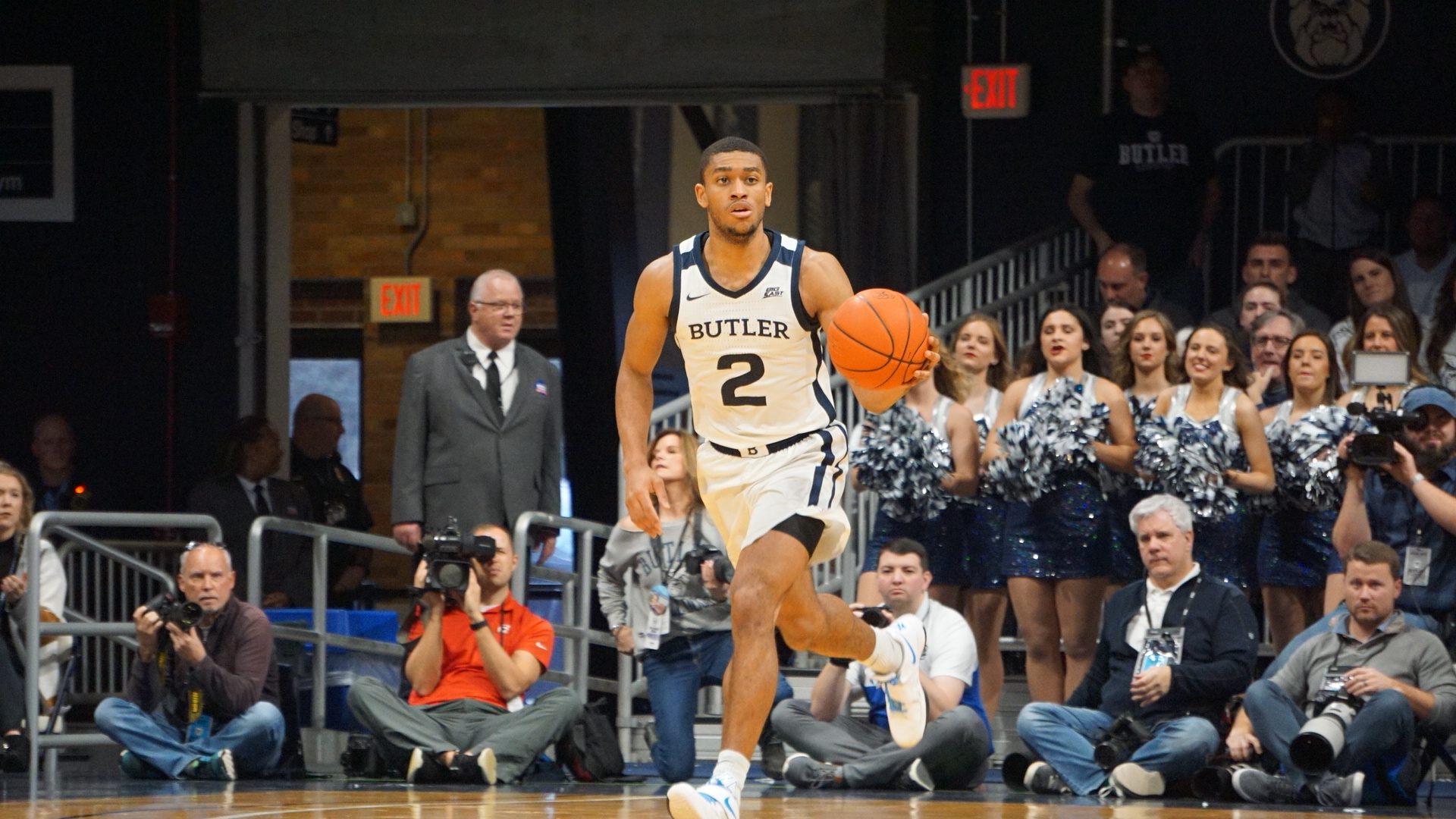 Aaron Thompson brings the ball down the floor in a game against Creighton on Jan. 4. Thompson finished with 10 points and two assists in the contest. Photo by Becca Atchley / Collegian file photo.

Just one week ago, the Butler men’s basketball team was undefeated in Big East play, hadn’t lost a game since Dec. 10 and was fifth in the newest AP Poll. Now, they are No. 13 in this week’s poll, have lost back-to-back games for the first time this season and have to go on the road to No. 9 Villanova and try to avoid a 3-game losing streak.

In the last seven days, the Bulldogs have lost at home to Seton Hall and on the road to DePaul by double digits. They’ve given up the most points in a game this season — 78 and 79 — setting that bar twice in consecutive games. The defense hasn’t been stellar and the offense hasn’t been much better. Butler has committed 28 turnovers in the last two games and has committed at least 17 in three of its five conference games.

The Wildcats are just a year removed from Big East regular season and conference titles, but a very new squad is taking the court for Jay Wright in 2020. Seasoned veterans Eric Paschall and Phil Booth have moved on, making way for Collin Gillespie and an array of young, talented players led by five-star forward Jeremiah Robinson-Earl and four-star guard Justin Moore.

Here’s what you need to know as the Bulldogs try to avoid a three-game skid against a Villanova team with a different model than years past.

1. Villanova’s attack is very well-rounded, and it features a player with a similar skill set to DePaul’s Paul Reed.

Without high-powered offensive players like Jalen Brunson, Omari Spellman or Phil Booth, the Wildcat attack is a much larger team effort than normal. For the most part, it’s worked this season. Five different Villanova players average more than 10 points per game and another averages over eight.

Junior guard Collin Gillespie — 14.9 points and 4.5 assists — is the next guard in the long lineage of quality Villanova backcourt players. He’s not quite at the level of Jalen Brunson, very few guards are, but he has stepped in nicely over the last couple of seasons and he’s even better this year. He has five games of more than 20 points this season and is shooting 42% from the field and 38% percent from beyond the arc. Stopping Gillespie makes it much tougher on Villanova offensively.

On the interior, Robinson-Earl has been the most productive presence and is so far the best freshman on the team. The 6-foot, 9-inch forward is averaging 10.8 points and 9.5 rebounds per contest. His build and game mirror another forward — DePaul’s Paul Reed —  with some quickness that terrorized Butler in their most recent game. Reed scored 23 points on 8-of-9 shooting in Butler’s 13-point loss in Chicago. Robinson-Earl will put similar pressure on Butler’s defense.

He’s not a great shooter, but can knock down an open 3-pointer when given the chance and is great in the pick-and-roll and finishing around the rim. He’s got some size and quickness that was troublesome for Butler’s bigs in the DePaul matchup. He’s very active on the glass on both ends of the floor and shoots free throws at an 86% clip. He’s a dynamic big that Butler will have to do a better job defending than they did against Paul.

If there’s one thing that could play into Butler’s favor, it’s Villanova’s skinny rotation. Six players are averaging more than 20 minutes per game, but after that, no one is averaging more than 13. If one player gets in foul trouble, the Wildcats will have to depend on someone they don’t usually have to for production.

2. The Bulldogs have to defend without fouling.

A week ago, Butler’s defense was top five in adjusted defensive efficiency at KenPom. Since then, they have dropped to 17th in that category and have given up their most points of the season in back-to-back contests. In a related issue, Butler’s opponents shot 25 and 32 free throws in the last two games, also season highs. Even with a head-scratching foul call here or there, Butler has committed too many dumb fouls hacking jump shooters and biting on pump fakes, in particular.

Quite simply, Butler has to do a better job of defending without fouling, especially against Villanova. The Wildcats are top 10 in the country in free throw shooting percentage. As a team, they shoot 77.9% from the line and five shooters shoot it better than 80%.

Butler has given opponents way too many chances at the charity stripe and has put opponents in the bonus with six or more minutes left in the half on multiple occasions. If they do it again against the Wildcats, they are going to make them pay. It’s already a tough task to go into the Pavilion and get a win. If you give Villanova 25 chances at the stripe — and inevitably get into foul trouble on the way — the task becomes almost impossible.

The Wildcats have three losses this season to the following teams: Ohio State, Baylor and Marquette. Each of these three teams has one particular thing in common, explosive guards who know how to score the basketball. Ohio State’s guards combined for 35 points on 13-of-21 shooting in a 25-point blowout.

Baylor’s guards were even better. MaCio Teague and Jared Butler combined for 40 points including 8-of-14 from beyond the arc. And finally, Kobe McEwen and Markus Howard combined for 51 points and went to the free throw line a combined 25 times in Villanova’s most recent loss to the Golden Eagles.

Kamar Baldwin and Aaron Thompson need to win the perimeter battle and make Villanova’s guards work to stop them defensively. Against some of the better guards they’ve played this season, the Wildcats struggled to contain them and it resulted in a loss.

Aaron Thompson is in the midst of his worst two games of the season, fouling out against Seton Hall with 6:28 remaining and committing too many careless turnovers against DePaul. It would be a great time for him to return to his previous form and join Baldwin in making it a long night for Villanova’s backcourt.